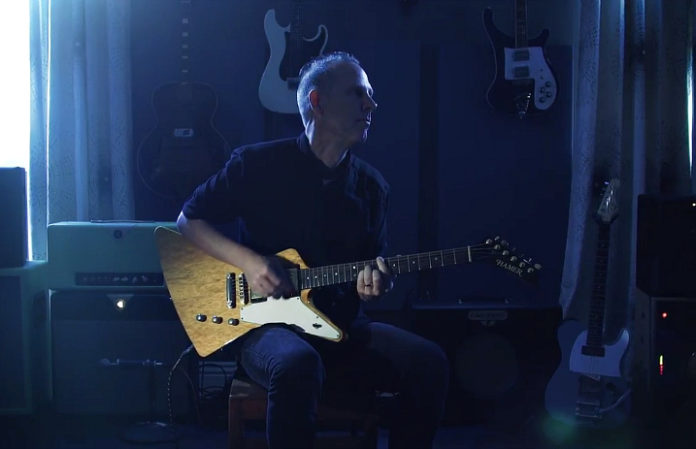 Ernie Ball is back with its String Theory web series, which explores origin stories of today's most innovative players in music. In this webisode, Ernie Ball artist Tom Dumont of No Doubt and Dreamcar looks at how those early guitar lessons impacted his career and his perspective on No Doubt’s musical evolution.

Nostalgia is a powerful force, and seemingly for Dumont, is intertwined with the musical career he’s led for over 30 years. With the full support of his father, Dumont began taking guitar lessons in his hometown at the age of 12 with a “Les Paul copy” that looked the part of his rock idols.

The timing was right.

In the episode, Dumont says, “I guess my fingers were just ready, and I learned to play guitar really quickly. It was something that drove me through my teenage years.”

That drive pushed him to pursue a degree in music in college. However, he found that practicing in a classroom was not the music he was aching to perform.

“The bad part about majoring in music in college was that… I was, like, starting over. I was 18 years old and taking classical lessons,” Dumont says. “I wanted to play through amps and play rock, so I ended up dropping out as a music major just because my passion wasn’t in being a classical guitar player.”

Obviously this did not deter Dumont from continuing to make a name for himself in the rock scene. At 20 years old, Dumont joined No Doubt where he underwent another kind of education, listening to bands like U2 or the Edge, which he says was “a completely different approach to guitar.”

No Doubt has become synonymous with experimentation, and in the beginning, this could be attributed to keyboard player and main songwriter Eric Stefani. Dumont says he understood the construction of music from his college theory classes, but being in the band showed him making great music didn’t require the “framework” he had come to rely on.

“Eric Stefani didn’t know theory, but he wrote the most incredible music, which broke all those rules that I was learning in school every day— and I loved the juxtaposition of that,” Dumont says.

Even after Stefani’s departure, the infusion of other musical genres continued without boundaries in the now four-member band. Dumont says this shifted the songwriting duties to him and bass player Tony Kanal and ultimately solidified the band in a category all their own.

“The sound of No Doubt changed during the making of [Tragic Kingdom],” Dumont says. “It’s a rock album that has some ska and funk and reggae beats in it, but we were just fearless about trying something new. As it happened, my musical personality and Gwen [Stefani]’s and Tony [Kanal]’s and Adrian [Young]’s all kind of formed our own sound. I’m so glad we did that, and I guess looking back that just brought No Doubt to a much bigger audience.”

Check out the full interview above and catch previous Ernie Ball: String Theory episodes here, featuring guests like Kirk Hammett from Metallica, Shavo Odadjian from System of a Down and many more.