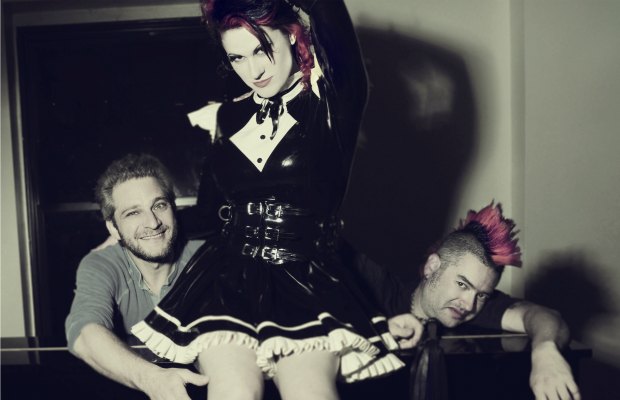 When he wasn’t up to his antics in veteran punk outfit NOFX, Fat Mike spent the past five years working on Home Street Home, a fully staged theatrical production. The musical follows a young runaway who escapes an abusive household and finds a new family among the misunderstood influences of deviant street culture. And, yes, it's a musical,  one that Mike put together with the help of musicians such as Frank Turner, Alkaline Trio’s Matt Skiba, Stacey Dee (Bad Cop/Bad Cop), Lena Hall (Hedwig And The Angry Inch), and members of punk stalwarts such as Descendents, Lagwagon, Old Man Markley, Mad Caddies, RKL and many others; that even features a performance by the late Tony Sly of No Use For A Name.

Greg Pratt caught up with Fat Mike to talk about the project, and the forthcoming accompanying soundtrack album released Feb. 10 on Fat Wreck Chords. There will be 10 live performances of Home Street Home in San Francisco in February and March before the production heads to an off-Broadway theater.

Why would you do a punk-rock musical?
FAT MIKE: Don't assume it's a punk-rock musical. It's a musical. There are a few punk songs in it, but the majority of the songs are not punk songs. It's a musical about stuff that's never been talked about onstage. I've been seeing musicals since I was a teenager and have always kept up with them and liked them—except the part where they're not that good. The Rocky Horror Picture Show and Hedwig [And The Angry Inch] are the only musicals where it's all good, and most musicals don't have that—almost inherently they don't have all good songs. That's what my goal was: to make a musical about something that no one's ever seen before. It's going to touch people, and it has all good songs.

The thing that struck me the most about the soundtrack is how touching it really is. I kind of went into it assuming it was going to be kinda silly or crazy, but there are a few songs on there where I was actually almost tearing up.
Live, there's not a dry eye in the house. Also, the record is a little misleading because we put some songs on it that aren't in the musical. The punk songs were just becoming a little distracting; the more story-driven songs and the sadder songs were the ones that are in the musical. It's a black comedy, but the silly songs didn't make it [onto the soundtrack].

How much, if any, of this is based on your own experiences?
A lot of it, and a lot of it is [based on] my fiancée’s, Soma Snakeoil [pictured center], and those of the people we are around. I can't tell you exact people, but one of the singers in the show was raped by her uncle for many years, and told us, “I still see him at family functions, he used to rape me all the time, and I never told anybody and I just fucking deal with it, because I'm not going to let that asshole dictate how I live my life.” And that's one of the main themes of the show: All these homeless kids were all fucked one way or the other, and they were all treated super-badly, but they're not going to let that mold their lives. They're going to choose how they want to live.

It's a positive story.
Yeah. It's about chosen family. I had parents, but one I never saw and one worked eight hours a day and went out every night and partied. So I pretty much raised myself and I was on the streets of Hollywood at two in the morning when I was 14. I did witness a rape, me and [NOFX guitarist] Eric Melvin did, and there was nothing we could do about it at the time. I've seen terrible violence on the street and people getting hospitalized for absolutely no reason, and I had three different friends who were all prostitutes or pimps. These stories are not something we made up: When NOFX was a young band, we were living in our van on the street with street kids, and selling drugs to get from city to city and siphoning gas. I know what it's fucking like to sleep on a floor in a squat.

What was it like hearing Tony Sly on there?
That was fucking… I broke out in tears when I found it. I didn't remember I had it. I was making a list of all the bands who played on it and I thought, “Shit, did Tony ever sing on this?” I went through a bunch of old tapes in the studio that I never would have looked through, and I fucking found it. I put it on and I totally started crying. I played it for his wife and she started crying.

So what's the plan after San Francisco?
We might do a few cities but we're opening in New York in mid-July in a medium sized, off-Broadway theater. Then the plan is to move to a big house. After that, take it on the road. It probably won't be for a couple of years [before it tours].

Who do you think the audience is going to be and how do you think it's going to go over?
I'm pretty confident about it right now because we played it in Connecticut for two weeks in December at a place called the Eugene O'Neill Theater Center. They get 2000 musical [submissions] a year, and they only pick eight; we were one of them.

The first performance… Dude, it was so scary because the entire front row was people in their 70s and 80s. Seriously. All greyhairs, like really old people, and they're theater-goers that have been going to this place for 30 years. I was watching their feet, and about half their feet were tapping. The guy who runs the place said to me, “Don't feel bad, Mike, but I know these people and they're not going to stay through act two. They'll leave at the intermission. They all want to get home, they're all old, and it's not really their style.” And every single one of them—every single person in the house—stayed. And they stayed after for the Q&A, and they said they'd never seen anything like it and they loved it. They said the punk songs—they'd never heard anything like it, but they were so catchy and the subject matter was so different that they could not stop watching. What might be hard is getting people to come, but it's not going to be hard keeping those people. What happened in Connecticut was that these old people kept bringing back friends, so they kept coming back to it, which is super-weird, too. So I'm pretty confident about it. I've never said to anybody, “Buy a NOFX record, you'll love it.” I've never said that. Not even close. But I think anybody who sees this musical will like it.

I put the record on with a bit of trepidation…
That's the problem: Nobody thinks Fat Mike is going to be able to write a fucking serious musical.

To me, your best writing is your most serious stuff. Songs like “Dying Degree.” Whereas the sillier songs… I'm not going to say “Creeping Out Sara” is your best work. There was so much of your serious writing on here that it took away those initial worries.
We really have to win people over just to even give it a chance. And that's the only thing that can make or break the show. People have to give it a chance.

Are you worried about that?
Not really, because… I mean, sure. I am worried. I am worried that we're not going to be able to take it to a decent-sized Broadway house. It costs millions of dollars to put it out there. So as long as people tell people they really should give this a chance… And if fucking 70-year-olds in Connecticut did it, I don't think it's going to be hard.

You finally won over the greyhairs.
This one lady was sitting next to us and she fell asleep after four songs. She was sitting right next to Soma. And there was this one cutting scene, where this girl cuts herself, and after that scene, which the lady was awake for, she was wide awake and afterwards said that was the most beautiful thing she'd seen on stage. She said it was something she didn't even know existed, but after the scene was over she was crying and she said it was the most beautiful thing. That was a really special moment for me. alt