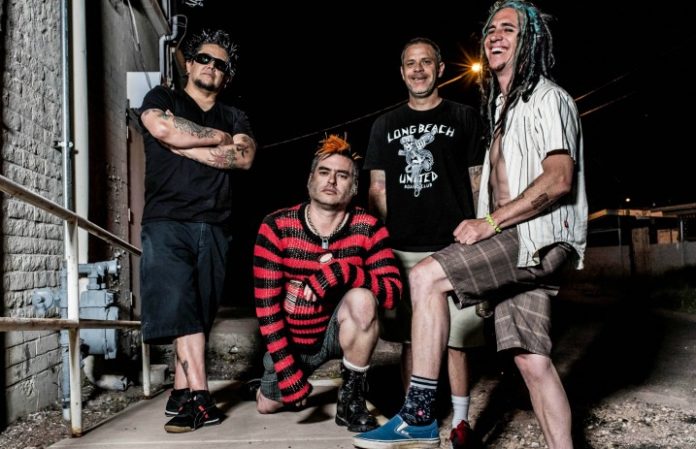 NOFX have been through a lot during their long history as a band. Like, really: a lot. Their new book, The Hepatitis Bathtub And Other Stories, details it all and does so in true, painfully honest NOFX fashion. Each chapter is straight from the mouth of one member as they go through the band's history, focusing far more on the behind-the-scenes struggles and triumphs of their individual lives than on band trivia and tidbits. The band held nothing back to writer/chronicler Jeff Alulis: drug addiction, sexual assaults, deaths (there is a lot of death in this book), difficult family lives, pee drinking… it's all detailed with an at-times uncomfortable amount of bluntness. We caught up with drummer Erik “Smelly” Sandin, who gives some of the most candid confessions in the book, to talk about the good, the bad and the ugly of Hepatitis Bathtub.

What was it like doing something a bit different, creatively? You're an artist, you make music, but what was this like?

First off, not an artist. I learned how to do one beat, and I got lucky with it. It was pretty intense; I probably did 30 or 40 hours worth of interviews in three to five hour blocks. It was interesting on how my take on a certain story would be compared to guitarist [Eric] Melvin's take, and how things differ, because there are different perspectives. It was kind of cathartic and kind of liberating in a weird way to dump some of this stuff. It was just really, really tedious. After a four- or five-hour interview, you're pretty fucking spent. [Jeff Alulis] would come at you with a question, it was almost like being interrogated, because then he'd come at you an hour later, the same question but worded differently, just trying to cross-reference, I guess. It was pretty weird.

“When you're in a blackout for almost a decade, it's hard to recall.”

I don't know about you, but I can't remember shit from 20 years ago very well.

It was really hard. There was a lot of stuff I couldn't remember. Mike would say, “Smelly, this one time, did this,” and the guy would ask me, “What's your take on this story?” I'd be like, “Fuck, I've got no fucking clue, I don't even remember that.” The stories are just the tip of the iceberg because every fucking night and every day was a crazy adventure, and these are just a couple that I remember. When you're in a blackout for almost a decade, it's hard to recall.

Tell me about the process of actually writing it. Is it correct that no one saw the other person's parts until it was off to the printer?

Yeah, pretty much. The process was Jeff would sit down with a bunch of questions, and we'd just start talking and talking and talking and talking. He did the same thing with everybody. He'd say, “Fat Mike told this story, what do you remember of it?” That was the only kind of cross-reference that I had to the other people's stories. I didn't read it until it was actually in the first form of print, in the editing phase, where it was a 400- or 500-page book at that stage.

Some of the parts where you guys are admitting things to each other, like when you took money out of the band fund to go score, these are pretty intense things to admit. What was it like when you guys all met up after? Was it awkward?

Nah, dude, we've been together for so long and we're really, really, really good friends, so we just laugh at it. The damage was done. It was a long time ago. Stealing a few bucks is no big deal, it's not like I was fucking with their mothers or something like that. So there was never anything awkward.

“What was and is difficult is how is my father going to react when he reads it…I'm afraid it's really, really, really going to hurt him and that will be awkward and weird…”

Your stuff in particular is very confessional, very open. Was that difficult for you?

I don't know if “difficult” is the word, because I'd come to terms with a lot of my past already. I'm in recovery for drugs and alcohol, and that has a lot to do with it. Drug and alcohol addiction isn't necessarily the drugs, it's the damage in the past and how you deal with it. So I'd already come to terms with a bunch of it. What was and is difficult is how is my father going to react when he reads it. He was not the most pleasant person to be around when I was a child, but we're really tight now and he's completely changed as a human being, and he's a super, super-sensitive man, and he was masking his sensitivity with anger. So that's what my concern is: I'm afraid it's really, really, really going to hurt him and that will be awkward and weird, and I don't want him to have to be carrying that around. So that was the hard part for me; if I say this stuff, it could hurt my dad.

One of the most powerful parts in the book was when you talk about how you've never told your dad you love him.

It's hard to get that shit out; you can't get that shit out. It's a weird thing; if that door is so fucking closed, it's hard to open that door. You know what? Since that was written, I told my dad I loved him. My daughter was going through a really hard time recently; my dad and daughter are really close because they have really similar backgrounds, and he called me to ask me what was going on with her, and he was broke up, like crying and really, really choked up. I could tell he needed it. I was like, “Dad, you know what? I love you, man.” Of course he didn't say it back. [Laughs.] He said, “Me too,” and that was it. So in a way, putting that in the book opened that door a little bit.

“Yeah, we approached this book with complete honesty. No one was allowed to fingerbang it, if you know what I mean.”

The other really powerful part was when [guitarist] El Hefe was talking about [bassist/vocalist Fat] Mike's partying and about how he has a problem. That was a powerful thing to put in print about a bandmate and a friend.

Yeah, we approached this book with complete honesty. No one was allowed to fingerbang it, if you know what I mean. No one was allowed to go in there and go, “I don't like this, take it out.” And yeah, you know… Mike has a problem. He does. And we all see it. And when it affects us, there's a problem. And then he goes, “Fuck, dude, I'm good.” Yeah, well, that's called denial, because you're affecting everybody else.

The stuff in there about those guys being high on-stage and how that made you feel was very powerful. Also the story about you sitting in your bunk listening to the guys in the band talk about how proud they were of you [for being clean], but you felt sad because you couldn't be down there hanging out with them partying. These are very open, honest confessionals for a crazy rock book.

We didn't want a fluff piece; a lot of bands are just all about fluff and image. No, this is who we are, we have fucking feelings and there's depth to it. I remember me laying in the bunk like it was yesterday. That was such a weird fucking feeling. Hearing them talking about how happy they were and how proud they were and how much they loved me, but I had to hide from them because of what was going on. It was so fucking weird. It was so weird.

Read more: NOFX’s Fat Mike got married and he dressed as the bride

Is there a moral to the book? Is this a cautionary tale, or is it a how-to?

I certainly don't want it as a how-to. I don't think that there's any big moral to the story or something to pull from it other than just an emotional ride. I don't think this is a guide to get rich, it's just stories. It's just our lives.

Give me a quick NOFX update. What else is going on apart from the book?

It's funny; right as you called I was about to put in our new [album], which got mixed yesterday and give it a listen to. It's mixed, it's done, in the can, it's getting ready to get shipped off to whoever it gets shipped off to. It sounds awesome. We used a different producer this time; we were using Bill Stevenson and Jason Livermore for a long time, but we used Cameron Webb and he did a fucking phenomenal job.

Hepatitis Bathtub And Other Stories goes on sale April 12. You can order it here. For details on the Hepatitis Bathtub Tour with Direct Hit!, Mean Jeans and other special guests—as well as book signings—visit FatWreckChords.com.

[Photos from Hepatitis Bathtub And Other Stories courtesy of Da Capo Press.]