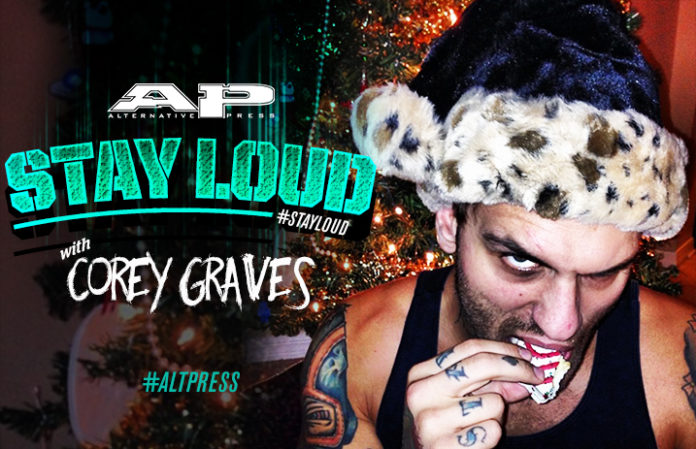 It’s December. Already. Before you know it, you’ll be up to your eyeballs in tinsel, wrapping paper and tacky gifts you never wanted from relatives you weren’t even sure existed. Worst of all, as you trudge through crowds trying to find the perfect gift that won’t get you dumped, your ears will be flooded with some of the most atrocious sounds the universe has to offer: Christmas songs.

Don’t get me wrong. Christmas music can be okay. Some of it is even downright good! But if I’m forced to endure “Feliz Navidad” one more time, I’m sticking drill bits in my ears.

And once the Christmas season eases, you’ll be stressing over New Year’s plans. Where to go? Who to invite? Who will you share that regrettable, hazy midnight make out session with? And are there even any good New Year’s songs to soundtrack the night? There’s “Auld Lang Syne” but only Ryan Seacrest likes that one. Prince’s “1999” was great until, you know, 1999 actually happened.

I’m not a total Grinch. I actually have some really fond memories of sitting in a dive near my house in Pittsburgh: alone at the bar, sipping a beer and playing the Ramones’ “Merry Christmas (I Don’t Want to Fight Tonight)” on the jukebox. Or driving to a wrestling show in the middle of nowhere when my friends introduced me to the holiday magic that is “No Presents for Christmas,” by King Diamond.

I asked a few of my more musically inclined friends to share the songs that make their holidays special… or at least tolerable.

Samoa Joe, NXT Superstar: “‘Oi To The World’ by the Vandals. It starts out with everyone hating each other for dumb reasons then after a thoroughly violent brawl complete with nunchucks, swords and police intervention, everyone makes up over a drink in a nice cozy pub. It’s my favorite kind of Christmas miracle.”

Zac Eisenstein, Man Overboard: “‘Father Christmas’ by the Kinks. I have always been a huge Kinks fan. It’s something I inherited from my father. I always loved this song because it added some cynical realism to the holiday spirit. My band even covered it once for Punk Goes Christmas.”

Renee Young, WWE Personality: “’Merry Christmas Baby’ by Otis Redding. I love this song because I randomly bought a beat up version of an Otis Redding ‘best of’ album and that song was on the second vinyl in the sleeve. I was listening to it a few years ago and had no idea that song was on it. So it’s for sure my favorite one to play at Christmas.”

Bayley, NXT Women’s Champion: “‘Christmas Time Is Here Again’ by the Beatles. I remember hearing the Beatles greatest hits album infomercial on TV all the time and I would sing along with the commercial. So my dad thought that meant I was this huge Beatles fan (but I literally only memorized the commercial) and played this song for me during Christmas.”

Stardust, WWE Superstar: “‘Complicated’ by Avril Lavigne. Stardust celebrates all the major holidays during winter, so things can get a bit…complicated.”

Kevin Skaff, A Day To Remember: “I think my favorite is ‘All I Want For Christmas Is You’. It’s in Love Actually, which is a top three holiday movie for me, so what’s not to love. Also my roommate’s favorite person ever is Mariah Carey and he’s holding me hostage until I send in this answer. #helpme”

I’ll be calling all of the action as NXT Takeover: London airs LIVE Dec. 16 ONLY on WWE Network.

Our official theme songs for the event are “Could Have Been Me” by the Struts and the Motörhead classic “Ace of Spades”!

Motörhead in December—does that qualify as a holiday song? I vote “hell yes.” Have yourself a “Lemmy” new year!

Have an amazing holiday, whatever you celebrate. Stay safe. Stay down. Stay loud.