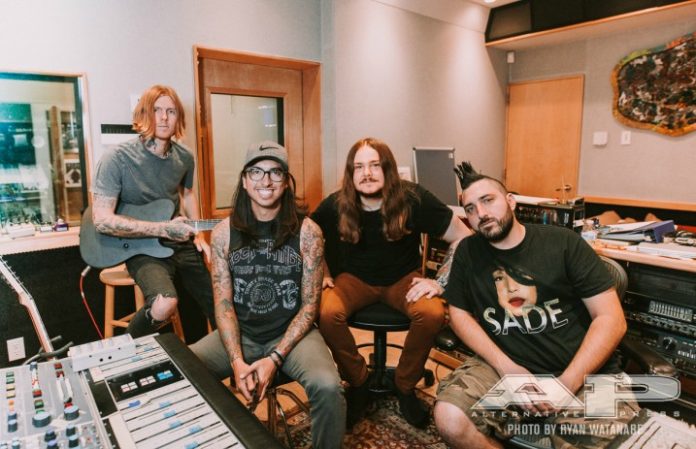 “This one’s the ballad,” says Of Mice & Men drummer Tino Arteaga, spinning in his chair to hit “play.” Fifteen seconds later, he shouts over the sounds of guttural screams and riffing guitars: “Hah, no, this isn’t a ballad!”

He’s sitting in producer Howard Benson’s studio in Los Angeles, playing AP their latest completed song, “War Zone.” It is certainly not a ballad, but the joke is poignant in its own right.

Since frontman Austin Carlile’s departure late last year, Of Mice & Men’s future—musically or otherwise—has been a question mark. The way Benson tells it, the drama never mattered for him. He knew when it came time, the boys of OM&M would deliver. “I didn’t know much about the previous singer… [but] the pressure was on these guys,” Benson says. “The kind of producer I am is if I find an artist I believe in, I really impose that feeling of positivity in the studio. Sometimes you have to go through these other things—drama with your singer, [dealing with] other studio environments—I don’t think they would have been as good of a band without going through that stuff.”

Ups and downs aside, one of the biggest asks of them is simple: Will their music stay heavy?

“For us, the heaviness doesn't really come so much from a place where we needed to do it for anybody in particular—fans or haters or anything like that,” says bassist Aaron Pauley, who has taken over vocal duties in Carlile’s absence. “A lot of people think we won't have a lot of heavy material. They can wait to find out whether or not there's heavy stuff,” he says with a knowing laugh.

Rounded out by guitarists Alan Ashby and Phil Manansala, Of Mice & Men have created a crop of material that definitely qualifies as “heavy stuff.” The aforementioned track “War Zone” opens with rapid rounds of initial screaming before descending into a series of breakdowns. Halfway through, there’s an anthemic, fully sung bridge that will surely ring off the walls on their upcoming tour. Their second unreleased single, “How Will You Live,” builds more on their most recent album Cold World, featuring huge drum fills and a repetition of the title, finished with an agonized scream.

Arteaga and Pauley practically bounce in their chairs while the songs play, occasionally strumming or drumming along. After the last, hard-hit note, the two of them settle in, eager to speak about the album they have been working on for close to a year.