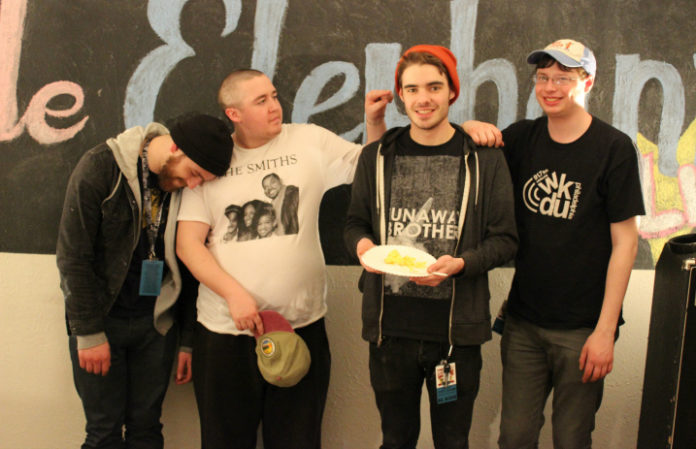 It’s one thing to invite bands over to record a live session from your living room and actually have it sound semi-decent. It’s another thing to have the audio sound professionally put together. But best friends Rob Courtney, Mark Metzger and Brian Gross-Bias, also known as Little Elephant, have been recording bands in their Toledo, Ohio, living room since 2011 and have been releasing videos of the live sessions for three years. Now Little Elephant has a new element added to the mix: the opportunity for music fans to purchase these live sessions on vinyl.

“I was on vacation with my family and somehow it popped into my brain: what if somehow there was a way to make all of our sessions available on vinyl?” Courtney says. “So I started doing the research.”

Starting today, Little Elephant will be releasing 10 to 15 sessions of bands they have recorded, every Wednesday until December. The house has hosted and recorded more than 150 bands over the past five years. Little Elephant’s first round of releases will include well-regarded acts like Modern Baseball, Counterparts, Sorority Noise and Spraynard among many others.

“Little Elephant has become somewhat of a staple for touring bands, DIY and beyond,” says Modern Baseball vocalist/guitarist Brendan Lukens. “It's so cool to see them continuously give back to so many bands and DIY communities. Now to have them releasing their sessions on vinyl is quite literally a dream come true for so many artists. They rock and are so sweet humans. Congrats, Lil’ Elephant! Also, what a cute logo.”

After attempting to seek out sponsorship for their videos and ultimately deciding that was not the path to take financially, the group decided making vinyl pressings of their sessions was the answer. They teamed up with a Toledo engineering company, Industrial Technology Inc. for design purposes, and spent about 18 months improving a lathe until it was perfected to the point of actually cutting records.

“These sessions are cut in real-time,” Courtney says. “If the (live) session is 15 minutes long, then we’re sitting there for 15 minutes as the record gets cut. Making the record is time consuming, but it’s a labor of love.”

Each record contains one band’s live session and will cost $15 for a 12-inch. Each release includes a screen printed jacket with the Little Elephant logo, as well as the band’s name hand-stamped on the sleeve, as well as a digital copy. The proceeds from sales will be split 50-50 between the band and Little Elephant.

“There was one summer I stayed at the Little Elephant house more than I stayed at my own,” says Sorority Noise vocalist/guitarist Cameron Boucher. “They are some of the kindest people I've ever met and I'm so grateful to be a part of this release with them.”