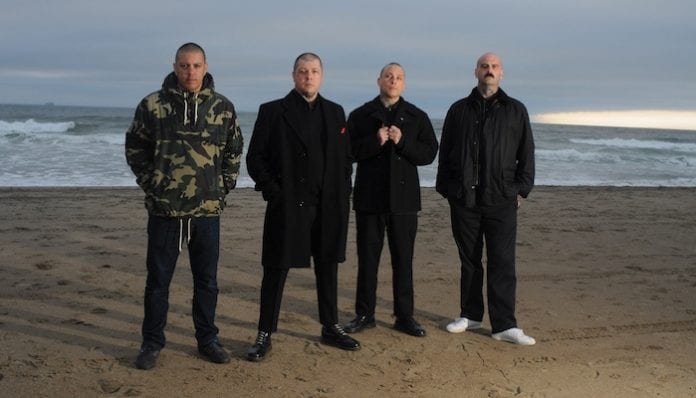 “Three-quarters of my life has [been] spent in this scene,” says punk lifer Lars Frederiksen, guitarist from American punk icons Rancid and one-quarter of his ambi-directional outfit the Old Firm Casuals. “Either making music or going to shows or doing whatever. For me, punk is my life, my culture—it’s who I am.”

“In any subculture, there are people who come in, enjoy it, then leave, Frederiksen continues. “I’m one of the ones who found it and stayed. As we go down toward the path of history, punk is still the most important music. It’s music that has a political message; it’s music that talks personally about experiences. I only have love for that world, love for my community and love for that ideology.”

To that end, we’re premiering a track from the Old Firm Casuals impending release Holger Danske, out digitally Feb. 15. Frederiksen explains “Pendulum” is about “thinking for yourself.”

“It’s also about rebelling against the force-fed opinions being shoved down our throats by different political parties and the corporate-funded media outlets who take a political stance,” he continues. “Most importantly, it’s about fighting fascism. Once you start telling people how to think, how to act or what to say, you become part of the problem. There is no conversation or solution when there’s no middle ground. The pendulum swings so hard to the right and the left, everybody gets hurt in the end.”

On his downtime from Rancid and with his other unit the Bastards permanently adjourned, Frederiksen was itching to start another band. Eight years ago, during a match from his evening soccer league, he became friendly with Casey Watson, a figure in the San Francisco punk scene. After some chats, Frederiksen ran the idea of starting a band with Watson playing bass and singing. Watson suggested drummer Paul Rivas to complete the trio.

They rented space for $10 an hour in a studio run by a guy named (wait for it) Bob Dylan, working on some versions of Casuals songs and “seeing this 100-year-old dude up on a ladder changing light bulbs and saying, ‘You guys go ahead. I can’t hear anything anyway.’ [Laughs.] The energy that we had from the get-go, that humble beginning and the energy between the three of us was coming from a different place. I was coming from Rancid, the Bastards and my background in Oi! punk, and Casey and Paul were coming from a hardcore place. The hardcore and punk worlds are easily conjoined, and I think them bringing that element into the songwriting is what makes the Casuals very different from a lot of the things that I’ve done.”

After an extensive amount of vinyl singles and EPs, the Casuals released a full-length debut album, 2014’s This Means War. Not long afterward, the trio came to terms with the fact that the songs they were writing needed a new addition to achieve their sonic potential.

“There is no conversation or solution when there’s no middle ground. The pendulum swings so hard to the right and the left, everybody gets hurt in the end.”

“As the songs became more involved—I don’t like using the word ‘matured’ too much to describe it,” he says. “In order to take these songs to where they need to go, we were going to need another element.” Fredriksen knew of Gabe Gavriloff from his role driving Bay Area band, the Sydney Ducks.

Gavriloff had a fan club: Members of that band approached Fredriksen at a party and selflessly told him their man was what the Casuals needed. Likewise, Metallica’s Kirk Hammett told Frederiksen Gavriloff, “‘has got an original style.’ If Kirk Hammett says that about somebody, then it’s probably true. [Laughs.] We had four band practices so he could get familiar with the songs, and then we went on the road for a four-week tour of Europe with Agnostic Front. He’s a virtuoso, an incredible guitar player. He does things I could never dream of doing.”

Like Frederiksen said above, he’s not fond of using the m-word to describe the Casuals music. But as a quartet with fiery chemistry and mad musicianship, “involved” is a good summary of what Holger Danske is about. There are definitely some pull-start pit shakers (“Get Out Of Our Way,” “Traitor,” “Thunderbolt”), headbanging fist-pumpers (“Nation On Fire”) and the construction of a majestic wall-of-guitars (“The Golden Fall Pt. 1,” “Zombies”). And check this out: Some of it is even downright commercial.

“Casual Rock ’N’ Roll” is the best song AC/DC never wrote, all solid riffing with Watson and Frederiksen front and center, while “Motherland” may be the most genuinely anthemic piece to ever come out of his guitar. Designating a punk band “commercial” is the kind of thing that will get journalists a pointed death-glare or two. Frederiksen, however, sees the bigger picture—from one end of his record collection to the other.

“We love rock ’n’ roll as much as we love punk and hardcore,” he says in regards to the new album’s breadth. “I think bringing all that to the table and not getting in the way of songwriting—letting them take form no matter which way it goes—and having these guys there to emphasize certain things, that’s where I’m lucky that we can make a record like Holger Danske. 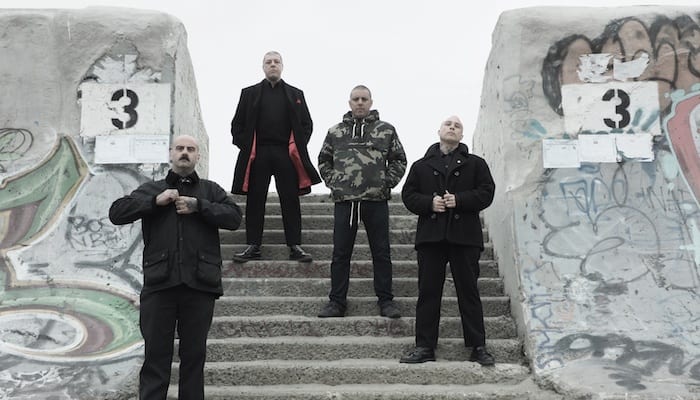 “The only thing I’ve ever tried to do is make music that I wanted to listen to,” he continues. “If I can be a fan of my own band, then I’ve won. No matter what band I’m in, I want to write songs and put out records that I love and that I’m proud of. To me, it’s just another facet of punk rock. All street rock ’n’ roll, whether it’s punk, soul music, skinhead reggae, ska, whatever it comes from, it’s all rock ’n’ roll. When you’ve got people who are excited about what the music is and what it represents, it’s easier to make tracks like ‘Motherland’ and ‘Casual Rock ’N’ Roll.’”

There’s also a significant political bend to the band’s new record. The title of the album is named after the Danish legend that never died, but was only in a deep sleep until summoned to protect Denmark. It’s a metaphor for how Frederiksen sees the way the world is now and how he wants everybody to get involved in fixing it.

“The story goes that every Christmas, an angel whispers in Holger Danske’s ear to tell him whether he can continue sleeping or if he needs to wake up and defend Denmark,” he says. “And that’s [what we’re saying in] the record title: Rise up and defend your beliefs and defeat fascism. It’s coming. It’s here.

“I started to think about what my mother had gone through in WWII, watching the Nazis kill her family so they could take their farm. She’d tell me stories about my uncle Viggo fighting in the Danish resistance. The more I thought about it, I wondered what the arc of the record would be. I remembered the story of Holger Danske, and I just kind of went there. She never really talks about that time so much with me. But as she’s gotten older, she’s opened up about it. Some of the things she saw at six years old…” He pauses to try to convey the gravitas. “That makes a lasting impression. I spoke with her on two different occasions, and it felt like what’s happening now in the world is what she felt in those days of her childhood.

“The insanity in our world today is something that we’ve never experienced,” he continues. “I used to think Reagan and Bush were bad—I really honestly thought they were the devil. And all of a sudden, it got worse! What do they say: People who don’t learn from history are doomed to repeat it. It’s not that we’re under a ‘fascist’ government. But it’s not like we’re not getting to that place.”

“[Punk] is the coolest music in the world, and it’s a surprise to me that not everyone knows that.”

Frederiksen came of age in the ’80s seeing people marginalized by the color of their skin, their sexuality and the size of their bank accounts. If you want to step to Frederiksen to question his stances, armed with your concepts of religion and social justice fantasies, be sure to bring a bottle of your favorite salsa to pour on the spot where you are standing. Because you are inevitably going to taste the floor.

“I never really judge people: If they want to believe in God, fine. It’s not for me, so don’t shove your views down my throat,” he asserts. “Because once you start telling me what I can say, what I can’t say, how I can act, how I can dress, how I cannot dress, that’s fascism. And I don’t care if it comes from the left or the right.

“There’s no middle ground anymore,” he continues. “There’s no place to discuss ideas: If someone says something they don’t agree with, they call it ‘hate speech.’ Honestly, I want racists to talk as much as they want so I know who the fuck they are. Back in the day, I was stabbed by those motherfuckers, defending my scene. There was a lot of blood spilled when I was growing up. I have no love for them and their ideology.

With the Old Firm Casuals, Lars Frederiksen has found an outlet to forge new chemistry with like-minded musical souls, sound the warning cry for the nation to right itself and pay homage to his record collection, featuring every kind of loud guitar-powered music you can consider. Even more important (and since it’s February, after all), Holger Danske is a valentine to the scene he’s forever embraced, with no intent to ever leave it.

“I feel like I got my ass kicked on so many times for looking like this,” he begins to laugh, “or playing this music, or singing these songs. On so many levels, mentally and physically. Me and countless others have stood strong for this music. [Punk] is the coolest music in the world, and it’s a surprise to me that not everyone knows that.”

Check out “Pendulum” below.