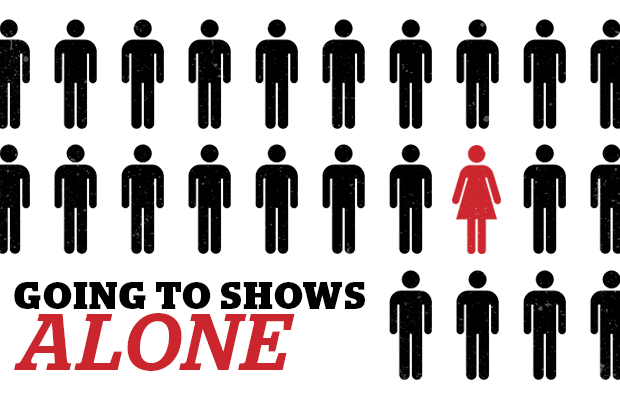 Going to a show alone definitely has its perks. You can fangirl all you want—there’s nothing like doing your own version of “throwing down” at the beginning of A Day To Remember’s “Right Back At It Again” with an armful of merch and drink in your hand. You can stand where you want, you don’t have to worry about whether or not you’re late and you can wait around and stalk Craig Owens for hours. Your experience is all you have to worry about.

Most of the time, going with a friend or two gets downright compromising. Did your ride want to leave Warped Tour early last year right before Ronnie Radke launched into “Situations?” Yeah, mine too.

However, there are a few caveats to being a girl and going to a show alone, ranging from irritating to dangerous, and they’re impossible to avoid.

What to wear
When I’m going to a show with another girl, there’s usually a text exchange that will be some version of: “Real pants or no?” And if you’re going by yourself, you don’t have anyone to bounce off of whether or not you should wear those white leopard print leggings with aquamarine Toms (which is totally appropriate for a Breathe Carolina show, in case you were wondering).

Standing in line by yourself
If you were with a friend, you’d be talking away about things you would normally talk about. By yourself, your only choice is to drain the battery on your phone. (Or meet new people, if that’s your thing. Yeah, no.) You’re also more of a target for people scalping tickets/shirts/water outside, and it seems like all the people handing out fliers and pins for PETA zero in on you. If it’s cold, there’s no one to huddle with when Simple Plan’s “Me Against The World” suddenly goes on repeat in your head.

Leaving your spot
I already mentioned that you can stand where you want when you go to a show by yourself. That is, until you want to do something else. Want to get a drink? Can’t. Want to grab merch when there’s no line? Can’t. Nature calls? Too bad. You can’t do any of these things and not risk losing your spot. This will inevitably happen unless, again, you make friends with strangers, which is easier to do after you’ve screamed the lyrics to “Caraphernelia” beside each other. When a stranger does help it’s as beautiful as a Ryan Gosling meme: “Hey girl, I have a broken heart, too. Go ahead, I’ll save your spot.”

Unwanted male attention
Most of the time resting bitch face fixes this problem, and also more often than not, no one cares that you’re there by yourself. Even the creepers are there to see the band, not hit on you. Occasionally you’ll get the guy who’s drinking Long Islands at a Red Jumpsuit Apparatus show who keeps asking you to show him the setlist, or the guy at Dropkick Murphys who demands you pretend to twirl him like a ballerina.

When the crowd gets rough
People in the pit get an extra shot of adrenaline at a show, which usually makes them downright mean, so on the occasion that I need to be up front—like for Brand New, because, obviously—being alone requires some buckling up. Everyone wants your spot and because you’re a girl there by yourself, they’re more inclined to try to take it. You don’t know anyone to link arms with to block out the girls that run through the crowd in a chain to get up front. You don’t have anyone to help keep you from getting kicked in the temple by a rogue crowd-surfer. Really, everyone is your enemy. All you can do is stand with your elbows out and be tougher than the girl who showed up in gym shorts and a bandana.

Judgment
Shows are supposed to be a safe place, really, as far as being yourself goes. And if you’ve decided to go to a show alone, you likely really don’t care what people think. Just don’t be surprised if a couple of people have nothing better to do in between sets than to say, “You’re not here by yourself are you?” Followed by looks of pity when you tell them you in fact are there alone. Or if you get dirty looks from the girl beside you who’s trying to record the whole show and all that’s going to be on that recording is your voice over Kellin Quinn’s singing “If You Can’t Hang.”

If you go to a show by yourself you have to be your own friend, but when the lights go down and you’re one of a thousand people screaming, you’ll remember that you’re not alone. alt