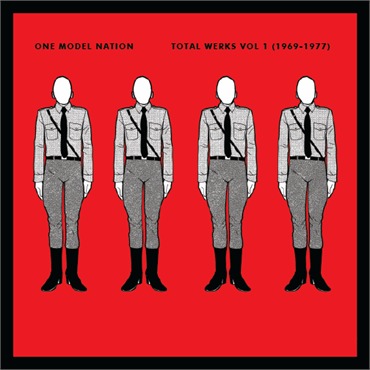 Check out the single “East Berlin” from One Model Nation's Total Werks Vol. 1(1969-1977). The band features Courtney Taylor-Taylor of shoegaze/psych-pop mainstays the Dandy Warhols. Here's more info about the band and an accompanying graphic novel. From a press release:

From US rock band The Dandy Warhols' frontman Courtney Taylor-Taylor comes a work of historical fiction set in Berlin 1977 during a fascinating period of political and cultural turmoil.

With striking art by indie super-star Jim Rugg (The Guild), this stand-alone graphic novel follows the epic journey of popular art noise band One Model Nation as they become embroiled in the police hunt for the notorious Baader-Meinhof Gang. The gang’s violent protests have the paranoid government suspecting every youth of conspiracy to overthrow the system and One Model Nation are about to become public enemy #1. “The book you hold in your hands is nowhere near an accurate historical text,” writes Courtney Taylor-Taylor. “It is merely inspired by the outrageous and outlandish behavior and style during this amazing time and place.”

The stunning hardcover features a foreword by Michael Allred (Madman, The Atomic, Red Rocket 7) as well as a host of behind-the-scenes extras including sketches, storyboards, a detailed director’s commentary, deleted scenes and a fascinating historical background on the Baader-Meinhof gang.

The book is released to coincide with the One Model Nation album (January 31st) by The End Records.