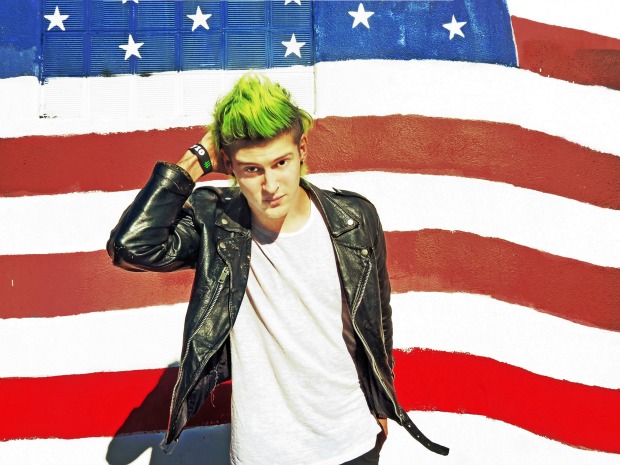 Matt Toka’s never been to Warped, so we thought we’d get his thoughts on being at the only tour that matters this summer. Here’s the second installment of our summer-long series with the green-haired hooligan. Look forward to weekly updates on Toka’s shenanigans, photos, videos and any other crazy additions he can throw at AP this summer.

June 19, Las Vegas, NV
Hung out by the pool for the majority of the day at the Hard Rock Hotel. There is an Affliction store in the hotel/casino and the music playing at the pool sounded like the soundtrack to Jersey Shore. I thought it was kind of ironic rock music never came on. I also lost $60 playing roulette so maybe that’s why I’m so bitter. Later that night while broke and bored, some friends and myself started messing around on the Vegas Strip.

June 20, Las Vegas, NV
Three words: really fucking hot. Las Vegas was around 106 degrees! Luckily, I had a late set, so by the time I was on the stage it was a lot cooler.  Earlier I blew up a blow-up doll and hung it at my merch tent. Honestly you could probably catch an STD from all the fingers people kept putting inside of it. I also got a picture with one of the guys from Skip The Foreplay. He was dressed like a penis… with balls.

June 21, Irvine, CA
It was awesome to be back in California. I was surprised how many people remembered me from the Warped Tour Kick Off Party. So many people were singing the lyrics to my songs. It felt incredible. I can’t believe only a few years earlier I was just playing street corners and open-mic nights.

June 22, Pomona, CA
Chris Wilson split his head open with his drumstick and started bleeding during “Say10.” He never looked so happy. I’m thankful it was nothing serious.

Later in the day I got to stand onstage and watch the Used’s set. Jeph Howard is my new favorite bass player. My favorite part is when Bert split the crowd in half during “Pretty Handsome Awkward” and when the song kicked in, the crowd charged at each other.

June 23, San Francisco, CA
By far my favorite show! There were so many people watching us during our set.  I’ve never played the Bay before so I was surprised how many people were singing along. I had to watch the Used again, and then I finally got to catch Falling In Reverse’s set. I fucking love all those guys. Their band is so tight and they shred like motherfuckers.  The view from the stage was so cool—you could see Giants Stadium in the background as the sun was setting.  I really wish I had more time to explore the city.

June 24, Ventura, CA
Caught Miss May I’s set earlier in the day. A bunch of friends came up so it was awesome getting to see everybody. Saw a lot of people from the past few days returning to watch my set and I was really thankful. Later in the day, I watched Breathe Carolina’s set. Kyle crowdsurfed almost to the end of the crowd and then back to the stage. They were so exciting to watch. Afterwards, I hung out at the BBQ and got my drink on. Met a lot of people on the tour and got to hang with friends.

June 25, San Diego, CA
I have the day off, and all I care about is taking a long shower and getting my laundry done. Maybe have a few beers by the pool. Until next time.

Be sure to catch all of Toka's video updates here and come back next Thursday for another installment of One Toka Over The Line.