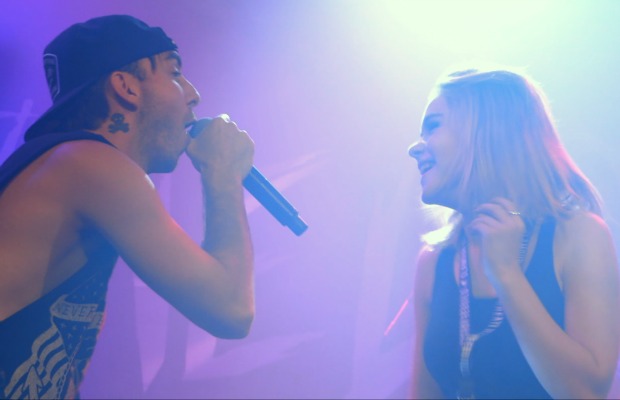 On paper, it’s enough to make even the most casual Freeform viewer cringe: Fan Girl is a movie that seeks to engage the fan experience using All Time Low as a singular focal point of affection. Mad Men star Kiernan Shipka plays Telulah Farrow, the fangirl in question, as the flick follows her foray into fandom and filmmaking, her two passions. It begins with Shipka laying in a room plastered with ATL posters on the morning of the band’s frontman Alex Gaskarth’s birthday. She’s exhausted after spending the entire evening perfecting a viral video to wish him well, and she’s late for school.

It’s harmless and accurate enough (in my own fan girl days, I was guilty of baking a cake to honor the birth of then-Blink-182 member Tom DeLonge) and continues to progress in teen reality from there. She takes the bus to her high school where she begins documenting the institution’s cliques. Instead of the nerds, jocks and preps of yesteryear, Farrow breaks down adolescent social groups into fine lines of behavior so indistinguishable from one another, they blur together. (The popular girls and the fashion elite are few degrees of separation from one another. Each group is labeled with word bubbles a la All Time Low’s “Weightless” music video.) However hyperbolic, it serves to highlight the beauty of today’s youth—there’s community in diversity and eclecticism. The only part that feels forced is how we get to this breakdown, Farrow describing the transition of alternative groups as moving from goth to emo to scene, a sub-MySpace progression that probably would’ve felt truer in 2007.

The beauty of Fan Girl is found in moments like these. The movie spends all of its energy avoiding condescension—a nice surprise considering the topic. In popular culture, fangirls (and fandom in general) are forever othered as hysterical and irrational. Fangirl enthusiasm is seen as crazy, their appreciation the result of puberty and misplaced hormonal fervor. It’s a dismissive reading at the very core, and this movie doesn’t relish in it…perhaps at the expense of a linear plot. The parts are greater than the sum.

Language is a success here. Early on, Farrow says things like “I feel like that sucks,” an accurate, anxious, dissociative, unsure example of being  a fan girl in 2016. The declarative notion of “That sucks” would feel too strong; there’s a lot more consideration and lightness happening in the “feel like.” There’s also a certain internalized deprecation inherent in being a fangirl, Farrow declaring “I’m just a stupid fangirl” early on in the film when things don’t go her way. She only sort of means it, but she chooses that part of her identity to attack, that part of her identity to act as the whole of it. It’s not that she’s just a “stupid girl,” but that her love of All Time Low is all of her—and is her easiest quality to deplore, because it’s probably something she’d be mocked for outside of her band-love. Farrow choosing to degrade herself as “a stupid fangirl” is a direct reflection of a world typically unapproving of fandom.

At one point, she discusses getting a tattoo and there’s only one option: The All Time Low “Stay Awake” lyric “You’re safe from the weight of the world,” in Gaskarth’s own handwriting. When asked what she would say to the band if she ever meets them, she responds with something almost too self-aware: “All Time Low? Something really witty and intelligent. Something that doesn’t imply I’m a scary fangirl but gives off more of like an ‘Oh, oh, yeah, you’re that band. I’ve heard a few of your songs before. You’re not that impressive, so try to impress me because I winged my eyeliner for this,’ kind of feel.”

In reality, when she meets Gaskarth, he compliments her name and she responds with, “Throw up!” Her expectation to play it cool wasn’t delivered because she just couldn’t; she was overwhelmed for her love of the dude. Fangirls (and teenage girls in general) are taught to downplay their enthusiasm, as if it isn’t something worth celebrating. In reality, her confusing (and adorable!) reaction confirmed her fandom.

It’s not just the fangirl identity that is treated with care in this movie, but the adolescent one: Farrow views herself outside the social hierarchy of the high school experience, but when the popular girl insults her “milky white legs,” she goes to a tanning salon to correct the non-problem, accidentally turning herself orange. It’s a scene that doesn’t really need to exist to progress the movie, but serves to highlight the insecurities that plague everyone of a certain age.

Simply put, Fan Girl is a strange and necessary movie. While its storyline could’ve used another examination (there are so many weird scenes like the one mentioned above that didn’t need to be there but were perhaps added for pop-punk cred; the edgy older girl who comes to school to cut off another girl’s hair, channeling Paramore’s “Misery Business” video), it does something more impressive. By treating the fangirl experience with documented, delicate appreciation, it serves to validate the identity trait. Fangirls don’t need our blessing, but they’ll be happy with it.