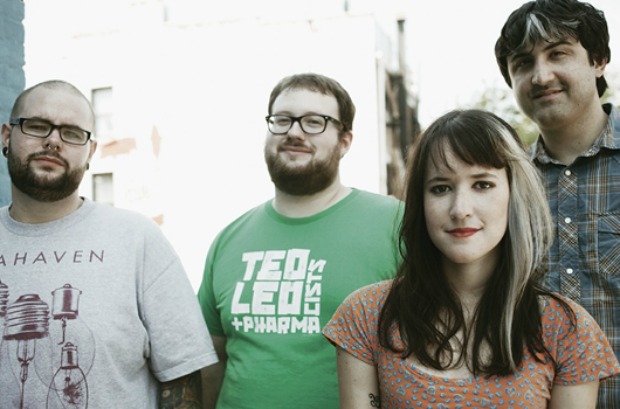 A few weeks ago we posted a list of 9 Things Women In Music Are Sick Of Experiencing, and it got quite the reaction from readers and musicians. One such musician was Mariel Loveland, frontwoman for Candy Hearts, who was inspired to write an op-ed about her own experiences with sexism. As she points out, sexism isn’t a new topic, nor are Loveland’s experiences unique to herself, unfortunately. The only way to combat sexism is to continue to talk about it.

Ditzy. Unenthusiastic. Shows too much skin. Shows not enough skin. Too different. Too generic. Gap-toothed. Writes mean songs about her exes. Writes about her exes. Has exes. Is annoying. Is unavailable. Is too available. Is too flirty. Is too cold. Has bad hair. Should get cancer and die. Boring. Awkward. Rip-off. Low-rate. Not smart. Feminazi. Too girlish. Too boyish. Not doing anything. Gimmick. Joke. Talks too little. Talks too much. Too thin. Too fat. Hot mess. Stuck up.

I recently wrote a post on my personal Tumblr page listing all the nasty things I’ve read about myself online. This was, in part, inspired by Lauren Mayberry of Chvrches and the experimental pop artist Grimes, both of whom have spoken out about being a female member of the music industry and the misogyny they face online and off. As someone who was bullied growing up and has felt that painful, unyielding sense of hopelessness that comes with it, my words were meant to encourage those who may be struggling with the same thing to stay strong. You are in charge of the way you view yourself, and you can choose to let negativity in or shut it out. You are not hopeless.

What began as an exercise in self-worth quickly became much more as I had the unfortunate epiphany I usually have when thinking about these sorts of things. The more I started listing comments—from the negative to the fairly unobtrusive—the more I realized it had less to do with my music and more to do with my gender. I’m not going to lie to you and say men in bands don’t ever get teased or harassed: It’s just as easy to throw the same insipid insult at a random guy with a guitar as it is to throw one at a random girl, especially when you are hiding behind anonymity in the soul-sucking caverns of Reddit and the like. Men face hardships too, because living is difficult in some way or another for almost every human on this Earth. But it’s not my place to talk about them because I’m not one of them. Which leads me to my first point on things I’m sick of hearing:

1. “You shouldn’t really be that upset.” After reading the comments on the altpress.com article, 9 Things Women in Music are Sick of Experiencing, as well as comments on various journals about feminism in relation to male-dominated industries, I have found that—holy hell—dudes love telling us how we should feel! Yes, there are benefits to being a woman. But you are not me, and I am not you, so you don’t know what makes me upset. Don’t tell me I should be excited that I can’t wander the beautiful cities we visit on tour alone at night, that I’m consistently belittled by promoters and security or that you have any idea what it’s like to read about the way your butt looks in jeans in a music review. Last time I checked, jeans were not music.

2. “You’re too much of a girl.” It was a very late night with a very good friend when I was standing in the subway, possibly inebriated, discussing the issues that arose on the last tour and how they still bothered me. He looked at me and told me I was just being too much of a girl. I’m sure if you’re a woman working in the music industry, you’ve heard this countless times. This is problematic in a number of ways, mainly being that I am a girl. Or a woman. Or somewhere in the strange purgatory that exists when you enter your 20s. On tour I am often surrounded by a group of 30 men without a female in sight. I am the other, and many men don’t understand what that feels like. They don’t know what it feels like to sit in your van alone crying and avoiding eye contact with everyone on the tour because someone started the rumor that you were available to any one of them at any time. They don’t know what it feels like to be called the dreaded four-letter S-word because you were a little bit too nice or joked about the same vulgar things they were laughing about five minutes prior. They don’t know what it’s like for someone on the tour to “call dibs” on you when you don’t even know them yet. On the plus side, I can use the ladies bathroom as my own personal dressing room, but that novelty has worn off.

3. “Are you just the merch girl?” There is a certain place reserved in Punk-Rock Hell for people who have asked me if I am just the merch girl, as if running the entire merchandising operation of a band is a lesser job to begin with. I have witnessed promoters go up to the person running our merch, tell him what time he’s playing, give him a wristband, then try to argue with me over whether or not I was a legitimate band member. Quite often I will respond, “I’m just dating someone in the band, please don’t kick me out.”

4. “They’re a gimmick; they just put the girl up front to sell records.” Any time someone asks where the other guys are so they can handle payment at the end of the show; says, “She doesn’t really play guitar”; complains about a backing track and proclaims it’s all a gimmick; and that a woman is upfront purely to sell records with her sex appeal, I want to shake them until their brains turn into scrambled eggs. Did it ever occur to them that maybe the girl is up front because she writes the songs, handles all the business or maybe just likes to sing? And maybe, just maybe the band are simply playing the music they like to play and they are all equals who didn’t give it a second thought.

5. “Did you see what she was wearing?” Fashion is fun, but sometimes you just want to be comfortable. In a D.I.Y. venue in the summer when it’s over 100 degrees and all my male counterparts are wearing shorts and going shirtless, I should be able to wear a pair of shorts without later reading comments about the way my butt looked (good or not), or how I’m sexualizing myself to sell records. I shouldn’t have to feel disgusting and violated because I have a female body and it is in front of you in clothes that don’t always fit right. The truth is, sometimes I’m just tired, I don’t care about what I’m wearing and it’s really, really hot. If it makes me feel good, what business is it of yours?

6. “She writes mean songs about her exes.” My band calls this one being “Taylor Swifted” and while it’s not really offensive, it has severely problematic gender implications. It runs under the assumption that after writing so many songs (which may very well all be about one person), you have had a lot of boyfriends and thusly, a lot of failed relationships. After a certain number of songs about failed relationships (most likely about that one person who hurt you really badly), you may start to hear that all those failed relationships were your fault. You are naggy, clingy, crazy, [insert other female stereotype here]. Meanwhile, you watch an army of your male peers sing about the girls who did them wrong while people raise their hands up and crowd surf. Sometimes a song is just a song.

Despite the amount of sexism I and many other female artists have witnessed, I’m not saying all (or even most) people are like this nor that all people do it on purpose. I too, am undoubtedly guilty of clicking on headlines about Kelly Osborne’s weight loss or the worst celeb bikini bodies. That stuff shouldn’t matter. Someone’s weight or ill-fitting gown has nothing to do with her worth, and women are put in the unfortunate position of needing to be 1,000 things at once. We must be sexy but not too sexy, nice but not too nice, feminine in this mysterious, ever-changing way and ostensibly agreeable. When we are not, we are divas and probably menstruating, or worse—our love for makeup, frilly dresses and radio pop has lead people to believe we are ditsy, vapid individuals. Of course, I’m generalizing. Sure, the sound engineer who calls me baby repeatedly or gropes me backstage raises a hatred in me that is unmatched, but he is at least a marginally rare breed. Mostly, people are pretty cool, and we love and respect our fans–or really anyone at the show–with all our hearts.

You can catch Candy Hearts on tour this month.