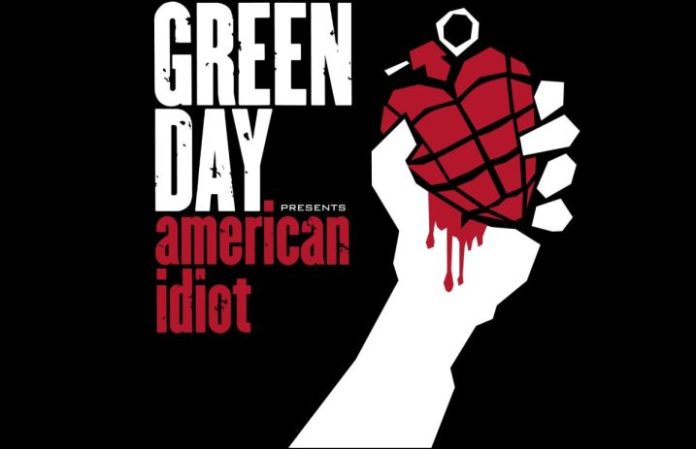 I was 18 when I first moved to New York. I lived seven stories above an NYU academic center cluttered with classrooms that were typically left unlocked for late-night study sessions. It was here that I would break into one of these chambers of academia and fill every chalk board with the lyrics of American Idiot. I was convinced I knew every line by heart, and I wrote the entirety of my favorite Green Day album in bright white chalk simply because I could. I’ve known since 2005 that American Idiot is one of my all-time favorite albums, but it wasn’t until I turned 18 that I realized why.

Many people argue that Green Day’s greatest work is their 1994 hit Dookie.  It’s the record that put them on the map and hosts some of their most iconic songs, even to younger generations. (I once saw a 12-year-old get on stage during the band’s 99 Revolutions Tour and belt the entire third verse of “Longview,” a song about boredom and masturbation.) While Dookie is sonically a punk album, it was still incredibly commercial, dominating radio airwaves and MTV.  It’s a solid pop-punk record that will continue to affect generations to come. However, for the most part, Dookie is pretty static. It’s a surface card at best, whereas American Idiot hosts a lyrical depth that convinced me that breaking into a classroom at 2 a.m. was a good idea. I still think it was a good idea—there’s nothing more rock ‘n’ roll than rebellion.

American Idiot was Green Day’s first album that was truly rock ‘n’ roll, a characteristic that Dookie, Insomniac, Nimrod and even Warning lack.  Pulling from themes set forth by the Who’s Tommy and the Beatles’ Sgt. Pepper’s Lonely Hearts Club Band, Green Day embarked on their first rock opera concept record. It was also their first record to openly address and critique the politics of the time. This shift in sound and attitude allowed for a punk mentality told through a rock album more openly accessible to the public, a public who happened to be living in a post-9/11 era looking for a scapegoat.

People wanted to let loose from the stress of the day-to-day pressures presented in a time of mass paranoia and overwrought propaganda. A rock album with iconic, blasting riffs was a simple musical remedy that consumers could easily relate to. But it’s never been the politics in American Idiot that made it so great, though it definitely helped. In fact, there’s really only two politically charged tracks on the album: the title track and “Holiday.” That leaves 11 other movements to shape the story.

So what is this story that makes this release so substantial? It’s an outline of America during 2004. We meet the stereotypical “American idiot” trapped in a culture so invested in materialism, capitalism and war that the general public is seemingly blind to everything else. “Now everybody do the propaganda!” frontman Billie Joe Armstrong commands as if it were just another dance fad. We then meet the cliché suburban youth: the aptly named Jesus of Suburbia. During the huge five-part song of the same name, the album delivers its thesis statement: this is a coming of age story.  Jesus is tired of his humdrum life and seeks adventure by moving into the city, leaving his small, safe world behind. He travels to his metropolis only to be overwhelmed by this new lifestyle (“Holiday”). He endures the hangover and wants to find himself (“Boulevard Of Broken Dreams,” “Are We The Waiting”). He discovers his many vices (“St. Jimmy,” “Give Me Novacaine”). He finds love, or infatuation depending on how you view it, (“She’s A Rebel,” “Extraordinary Girl”) before realizing who he really is and decides to bring himself home (or at least back to reality) (“Homecoming”).  American Idiot is basically “SLC Punk! The Album” sans Heroin Bob.

And yet, this coming of age story we’ve heard “a million and one fucking times” resonates with listeners on a much different level than any Green Day record prior, because, unlike Dookie, it is progressive as well as timeless. American Idiot evolves in meaning and content with the listener as the listener works through his/her own life. It is relevant for the current generation, the one that consumed it in 2004 and the future listeners’ generation that will discover and grow up with the record as life carries on. Teen angst is a monumental part of maturing that is perfectly encapsulated in the first half of the record’s story through the origins of Jesus of Suburbia, but also captured sonically via the majority of the songs. As noted earlier, American Idiot fucking rocks. It hits hard and kids like their music loud, whether they understand the context or not.

I was 11 when the record came out and had no personal connections to tracks like “Whatsername” or “St. Jimmy” because I had never had my heart broken or been exposed to drugs. When I was 14, I told a guy that my favorite song was “Letterbomb” and he asked me out.  I had absolutely no clue that the lyrics narrated a sense of social anxiety and crippling paranoia, but I liked the main guitar riff, and apparently so did 14-year-old Kevin Carty. By the time I was 18 and breaking into NYU classrooms, I understood more. I had left my home in suburban Maryland and moved to the city where I had freedoms I’d never experienced before. I had a pretty good grasp on the ideas presented in “Jesus of Suburbia” because I had just gone through them. The album was growing with me.

In American Idiot, there’s a lyrical sophistication that Green Day taps into seldom seen in any of their other records. They take lines like “I’m not part of your elite/I’m just alright” (“Stuck With Me,” Insomniac) and turn them into “And there’s nothing wrong with me/This is how I’m supposed to be/In a land of make believe/That don’t believe in me” (“Jesus Of Suburbia”). The character St. Jimmy doesn’t just “get high high high/when he’s low low low” (“Misery,” Warning) he becomes “the needle in the vein of the establishment” and the “suicide commando that your momma talked about” (“St. Jimmy”). Problems extend past bored afternoons filled with porn and weed in the ‘90s to severe drug addiction, heartbreak, loss of self, cultural constraints and all the other bullshit today’s set society is forced to endure on a daily/weekly/monthly basis. Green Day are snarky: They’re telling the listener welcome to reality, the real American dream, the land of the free while also asking, “Is that a possibility?”

I am now 23 looking back on that album with more of life’s doors unlocked only to find myself connecting on a deeper level with it as I have gotten older. The lyrical content, though written with a set purpose, can easily be misinterpreted to work for the listener’s own personal needs. Yes, “Wake Me Up When September Ends” is about death and loss, but it’s not about 9/11, it’s only perceived that way because that is how the generation viewed it at the time.  The song is actually about Billie Joe Armstrong’s late father who died in the month of September. Except that doesn’t entirely matter because consumers in the mid-2000s found a way to make it apply to them, and as time carries on upcoming generations will apply new meanings to it, too.

Youth is rooted in inherent selfishness. As kids, everything is handed to us by the safety nets provided to us by  our families, teachers and mentors until we want to make it on our own. It’s only then that we inevitably fail at something in a truly impactful way—that’s the story American Idiot elaborates upon. It’s catchy and angst-filled; it’s rebellious, but crippled by a reality check. It offers resolution (“Homecoming”), but it also offers reflection (“Whatsername”).

This dichotomy of resolution and reflection has always been a key factor of the record. After you get dumped and get through the Taylor Swift stage where your whole world feels like it’s crashing down, go listen to “Whatsername.” It’s the perfect summary of the numb feeling you get thinking about your ex, vaguely remembering the good times you had and the void you’ve partially filled without them. The whole song itself becomes a metaphor for looking back on what you’ve done in life and accepting the bad, taking notes of the regrets but moving on and moving forward because you have to. When Armstrong says, “This is the dawning of the rest of our lives” (on “Holiday”) he means it. Once you set forth, there is no going back to the innocence you once had. And that (though it may not seem like it) is a damn good thing.

The members of Green Day were in their early thirties when they wrote American Idiot, so it makes sense this semi-autobiographical record resonates with me as I slowly approach those years on my own. They’ve already lived it; they know what comes next. I probably wouldn’t break into a classroom and graffiti its walls today, but I’m glad I did back then. At that time in my life I was pushing the boundaries of my freedoms and seeing what I could and couldn’t get away with. I have a pretty good grip on those limitations now, and five more years down the road I’ll have even better insight. From the lyrical depth to the overarching coming-of-age story mapped out on the album, I’ve spent the last 12 years of my life understanding American Idiot on a more personal level with each and every listen. Out of all of Green Day’s records, there’s a reason that this one has won a Grammy, had a documentary released on it, and had been adapted into a Tony-award winning Broadway musical. American Idiot works on so many platforms by telling a story we all know, because oddly enough, it is also telling the story of our own lives. And that’s a story we all want to listen to.