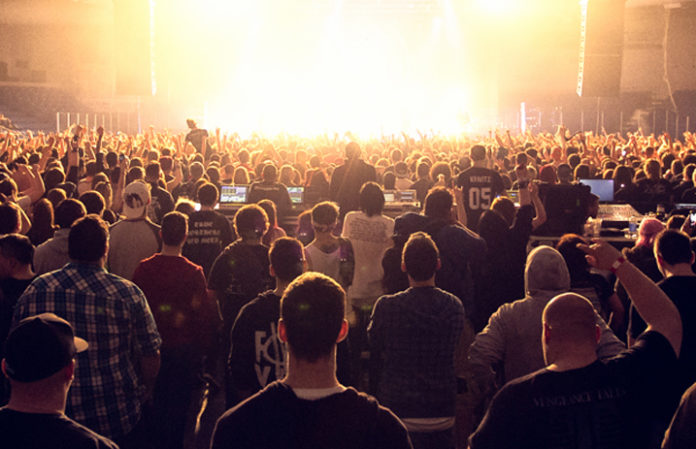 I heard six pops before the music stopped.

Half of the people on the dance floor hit the deck. The rest of the fans and industry figures in attendance seemed to look in the direction of the shots, in a daze. A few people screamed. “What was that?” more than one person exclaimed. The lights went on inside Hollywood’s 1 Oak nightclub, inside the same building that once housed historic rock venue the Key Club. The Key Club was the site of important early gigs for The Doors and Van Halen. I’d personally seen Marilyn Manson, Steel Panther and Winds Of Plague there.

“I think a speaker blew,” I heard somebody say. I didn’t see it go down. But I recognized the sounds and the resulting smell.

Those six pops were gunshots.

I was at 1 Oak the night Marion “Suge” Knight was shot. It was the early morning hours of August 24, 2014 and the former Death Row Records CEO and onetime N.W.A. bodyguard took five bullets to his stomach. A sixth bullet passed through his arm. Knight survived. No witnesses ever came forward to identify his shooter.

A few days ago, rapper Troy Ave was indicted for a shooting spree at a T.I. concert at New York’s Irving Plaza that left one man dead and three others wounded. This is another venue familiar to readers of Alternative Press. Emo Night Brooklyn just happened there. Motion City Soundtrack and Pierce The Veil will play there later this month.

PTV and Bring Me The Horizon had played the Bataclan in Paris, France one year to the day before the November 13, 2015 massacre at an Eagles Of Death Metal concert where 80 people were killed and multiple others wounded. It was part of a coordinated attack perpetrated by extremists pledging their allegiance to the so-called Islamic State, the same group that inspired a sympathizer to murder 49 people and wound dozens of others at a popular gay nightclub in Orlando, Florida. The worst mass shooting in U.S. history came just one day after the shooting of singer Christina Grimmie at a music venue in the same city. Grimmie was killed as she met with fans.

The scale of the carnage in Paris was previously unthinkable and now the Pulse in Orlando has become America’s own Bataclan. It’s hard not to connect each of these events, as they all took place in venues where patrons come together to hang out, dance and sing-a-long, generally feeling perfectly safe and protected together. Somebody falls down in the pit? They’re picked back up. A performer or audience member jumps off the stage? We catch that person.

I won’t pretend that the shooting of a reviled fallen music mogul (who survived) bears any resemblance to what the many victims in Paris and Orlando experienced. But because of that night at 1 Oak, I can relate to the visceral sense of danger, the overall cloud of dread and the unshakable feeling of violation that comes when someone firing a weapon interrupts a night of revelry in a crowded club.

I now know what it feels like to be inside a music venue when gunshots go off without warning, when violence rips through the assumption of safety we have in familiar situations. I have personally trained for active shooter situations. Most of us, of course, have not.

Sure, I grew up reading about the man stabbed by bikers who were working security for the Rolling Stones at Altamont. There have been people trampled by crowds. There have been riots. Woodstock ’99 went down in infamy. There was the horrible fire at a Great White concert. Brawls at different types of hardcore shows aren’t uncommon. But the idea that someone might pull out a pistol, let alone an assault rifle, and start shooting people at random? That feels new, unfamiliar, incongruous and altogether nauseating.

I was chatting with a booking agent friend via AOL Instant Messenger one night in December 2004 when he asked me if I’d heard about “what happened” at the Alrosa Villa in Columbus, Ohio. This was a venue where a lot of my friends bands played, bands like Shadows Fall. This agent had gotten word from colleagues that there had been a shooting at a show headlined by Damageplan, the group featuring Vinnie Paul Abbott and his brother, “Dimebag” Darrell, both from the legendary metal band Pantera. There wasn’t any news about it on the internet yet and MySpace was the only social media anybody used.

So I called up an old colleague at MTV News and we began to chase the story. Soon, I was talking with friends around the country, as the metal, punk and hardcore community searched for new information and eventually, grappled for answers. As the world would soon learn, an ex-Marine had stepped onstage and murdered Dimebag Darrell where he stood playing guitar. The deranged alleged “fan” of Pantera killed three more and wounded four others before he was shot by a police officer, among the first to arrive on the scene, who’d entered through a backdoor. I remember tearful conversations that night, as friends in touring bands and crews shared their shock and grief.

I’ve been to so many hardcore, punk, metal, hip-hop and rock shows where audience participation is encouraged right down to inviting fans onstage. As any massive Morrissey fanatic like myself will attest, rushing the stage is just part of the Moz experience. Plenty of scene musicians I know changed their attitudes about this post-Dimebag’s murder. I don’t blame them. All of the “rules” are just different now.

That night in 2014, I’d just finished up a long day at the FYF music festival in downtown Los Angeles when I got a text from a friend. A friend of his was working the Chris Brown hosted MTV VMA pre-party and had invited us. It wasn’t the type of event we’d normally try to get into, let alone get invited to, so we decided to go and people watch.

We didn’t actually see the shooting. In fact, we hadn’t even seen Suge Knight enter the venue. But we heard the gunshots. We smelled the smoke. We saw his blood. Because I recognized the sound of gunfire, knew where the nearest exit was located and have spent time training for active shooter situations, I was able to calmly grab my friends and make a hasty exit from the venue.

We were safely on the street before law enforcement had arrived. The police closed off the block and had everyone exit with their hands up. I couldn’t begin to count how many guns the cops pointed at the venue. It looked like something from an action movie. But it was real.

When we enter any kind of venue to see a band or listen to a DJ spin music, we shouldn’t have to wonder whether or not someone will be shot, let alone whether we’ll witness dozens of people killed by a weapon of war, or be gunned down ourselves just for being who we are and enjoying what we enjoy. But now we have to think about it.

This doesn’t mean artists shouldn’t say hello to their fans in person. This doesn’t mean we stop going to concerts, or stop dancing at gay nightclubs, or stop spending time with our friends. I’m of the belief that extremist rhetoric and related violence is demonstrative of a massive cultural shift toward progress and not the other way around.

We’ve seen so much happen in terms of inclusiveness and love; it only makes sense that the last remnants of a more hateful age will erupt in fits and starts as they are swept away. By all means, we should celebrate life like never before. But we have to be aware.

Much has been written about how to make concerts safer and there will undoubtedly be much more written and debated in the coming weeks about how to adapt to the threat of gun violence in clubs. But even as we wait to see what new measures promoters and policymakers may consider, let alone implement, there are ways we can take responsibility for our own safety at shows right now.

First, make yourself aware of where the exits are when you arrive at a show. Keep a first aid kit in your car. The Department of Homeland Security offers a guide for handling an active-shooter situation. Northwestern University has one specific to campuses. Study them.

We’ve all heard gunshots in movies, but many have never heard a gun go off in real life, let alone fired one. I’ve read that many fans at the Damageplan gig initially thought the gunfire was part of the show. As I mentioned, many people around me at 1 Oak mistook the sound of gunshots for a blown speaker. I strongly advise visiting a local shooting range. Learn to recognize what real guns sound like.

It’s true that heart disease, cancer, accidents, strokes, pneumonia and the like are much more likely to kill us than an act of gun violence in a public place like a concert venue. Death by auto accident is an exponentially bigger killer than mass shootings. Many of us try to guard against these things as much as possible. We eat better. We exercise. We buckle up. We obey speed limits. The odds of an active-shooter event happening to anyone reading this may be slim, but there is a chance that it can. Until things change, we must take steps to endure our own safety and the safety of those around us. ALT