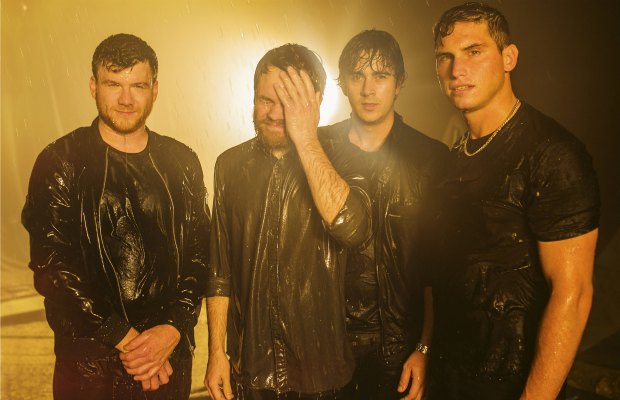 In the new issue of AP, we asked “should bands offer VIP tour packages to fans” with 70 percent of readers responding “yes” and 30 percent saying “no.”

This is an issue close to the heart for ENTER SHIKARI frontman ROU REYNOLDS (pictured second from left), who hit us up almost immediately after we first posted the poll to put together his own response, which follows.

During the last five years, a peculiar concept has been introduced to our alternative music scene that appears to go against every notion of what “punk rock” should stand for, yet has successfully infected it.

Borrowed from the bloated, narcissistic philosophies of Hollywood, the concept I’m talking about is the hallowed meet & greet—the infamous VIP package.

First of all, let’s define this concept in precise, objective terms.

In its most basic form, the peculiar transaction plays out like this:  One human being pays—usually a substantial amount of money—to be in close proximity to another human being.

Sure, there may be a hug and a photograph. Maybe even a poster or a T-shirt (depending on which “tier” of fandom your cold, hard cash grants you access to). Maybe even access to the mythical, otherworldly—and let us speak in hushed tones of reverence—“soundcheck,” i.e., a bunch of guys playing lackluster, hungover versions of their own songs, often without vocals, and usually chock-full of mistakes. Surely logic and goodwill would suggest that if paying ticket holders are enthusiastic enough to be queuing from early in the day, let them in to watch the boring technical stuff for free! It doesn’t cost the band anything to do that. This is something that Enter Shikari (and many other bands) have been doing for years. And that isn’t me attempting petty one-upmanship. This is just something that I’ve always considered normal. If fans have bought tickets with their hard-earned cash, give them a little extra—if you care about them, that is. Don’t treat them like some inanimate object, like a commodity.

So, we’re agreed. In the simplest terms, currency is exchanged to facilitate one person being in another’s presence. Which is weird, eh? And yet, somehow, this has now become a complete normality throughout the “alternative” scene.

Perhaps suffering from lethargy, or maybe negligence, punk rock appears to be submissively allowing this infection to become an accepted part of its body.

Do they deserve your time? It sounds like their head is big enough already. Think of their poor shoulders having to lug around such a bulbous, bulging skull.

At this point, let me try and second-guess a few of the reactions and disagreements some people may be having with me already. I’ll even formulate it in script form, just for your delectation.

DISSENTER: Hey, stop right there, whiny British jerk. I paid for a M&G with <insert band> and it was great. Well worth it. This is just supply and demand!

ROU: [Turns away from dissenter and subtly facepalms to the audience, then turns back.]
Of course you’re going to be happy to meet people you look up to. Anyone would be. But that doesn’t excuse the fact that the band chose to exploit their relationship with you. It was their decision to charge you. They could have done it for free!

DISSENTER: [Becoming increasingly irritated.]
No, I heard it’s the record labels/managers/promoters who make bands do it!

ROU: My friend, this is simply not the case. Do you really think band members are treated like slaves, carrying out orders with no say in the matter? Whichever artist told you this is being disingenuous, lying to themselves and being cowardly to you.

DISSENTER: [Looks around frustratedly as if beginning to scrape the barrel in search of other arguments.]
Well, bigger bands probably just have too many fans to realistically meet before a show?

ROU: Granted. But, are there not a plethora of tried and tested ways to organize free M&Gs? For instance, the first 100 in line for the show? Or in-store signing sessions where fans get their purchases signed? Ticket raffles? Social media coordinated events? Even if a band wants to charge, why not give the money to charity, instead of giving yourself a handsome bonus for simply meeting fans. Even bankers who get their colossal bonuses have worked for it (well, worked–lobbied–gambled–manipulated–cheated–stole for it, same thing).

DISSENTER: W-well… well… b-b-but… band members have mouths to feed, Rou! And what kind of fucking name is Rou, anyway?!
[Dissenter runs back to their room to sob and listen to whatever glorified, insipid metalcore band is the flavor of the month.]

ROU: It was the name of the first king of Westeros. And yes, band members have mouths to feed but they don’t need to wave their integrity goodbye to do that. Bands charge for meet and greets because of greed or ignorance. And remember, the root word of ignorance is ignore. And fans shouldn’t be ignored.

Isn’t the essence of alternative music to break down the boundaries that divide us? To declare, loud and proud, that it doesn’t matter if you’re different, you are free to express yourself here; you’re accepted here; you’re one of us. If you charge people to meet you, you are overtly stating that you think you are superior to them, you think you are better than them. You are basically saying, I am not one of you.

One definition of the word prostitution is as follows: “the unworthy or corrupt use of one’s talents for personal or financial gain.”

Why do you think your fans dig your music in the first place? Because it’s real; it’s passionate; it’s visceral; it’s dynamic. And it means the world to them. So don’t offer them this lifeline of self-fortifying music and then throw it back in their face by exploiting their devotion. You used to feel the same way about other bands as they now do about you. You used to be them. And deep down inside, you still are. So stop kidding yourself. If you want to be Hollywood, fuck off to Hollywood. And let the rest of us to get back to offering the alternative.