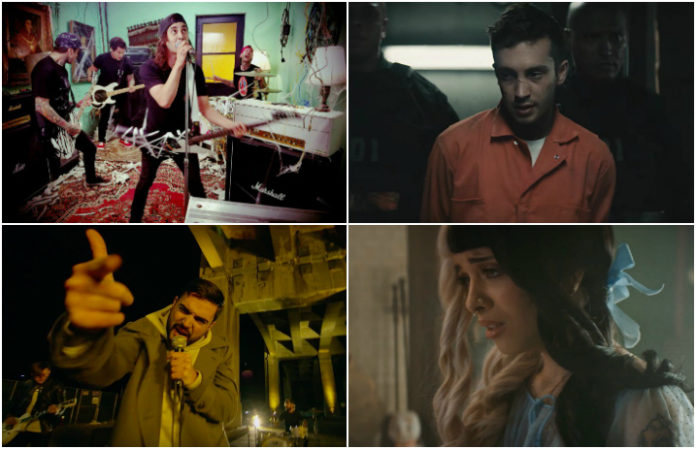 While everyone in the mainstream is screaming about how music videos are “a lost art,” our scene is out here proving them wrong. This year, we had an incredible batch of artful, sinister and sometimes downright silly videos across the board. From making a statement to just making fun, here’s what caught our eyes (as well as our ears) in 2016, brought to you in partnership with our friends at Full Sail University.

There’s nothing quite like the overarching fear of anxiety, and in A Day To Remember’s first video supporting their 2016 album Bad Vibrations, the band perfectly encapsulates the dread of lurking paranoia. Focusing on the sped-up nervous tics of Jeremy McKinnon while he’s being examined by a shrink, the vocalist and his band are soon stalked by a shadow monster through city underpasses and alleyways. Think It Follows, but with tattoos and breakdowns. Look closely, and you might catch a glimpse of ADTR’s comic book-themed AP cover. —Natasha Van Duser

Blink take it back to their earlier days with this music video by gender-flipping their ever-popular “What’s My Age Again” music video. Instead of the band members racing through the streets naked, it’s the ladies’ turn. It’s a fun premise, but it’s also extremely significant given the current state of affairs concerning women’s rights and their power over their bodies. And in place of the stereotypically hot nurse that makes them turn their heads, we get the ultimate hottie, the men of all men: Workaholics’ Adam Devine. No one can swing a stethoscope like he can. —Taylor Markarian

BRING ME THE HORIZON – “Oh No” (Columbia Records)

Remember when ISS vocalist Devin Oliver posted some photos that led to Game Of Thrones rumors circulating? Well, we finally found out what those photos were from. And while it might not be Oliver's time to shine on HBO, he and the rest of his band undoubtedly shine in “Calm Snow,” which kicks off their newest album, Treehouse. Everything from the special effects to the lighting to the major contrast between scenes and the director's vision give this video a completely different feel than any of the band's previous clips—and quite possibly anything circulating the world currently. —Bryce Hall

With this song, Issues took a firm stance on one of the country’s most talked about political topics. The lyrics of “Blue Wall” address police brutality, calling  for a focus on accountability, as well as voicing  their support for the Black Lives Matter movement, With  clips of protests and militarized police forces flashing between the group’s eccentric live performance. The video takes the song’s theme to the next level, much like Issues’ opinion on the subject. —Nikhail Gogia

The video has a Whiplash-ish vibe with some rich, old fucker making the band feel crummy in weird sets with naked alligator framed photos.  There are super cool integrations of the Copasetic album art throughout the video.  Also, something about Joe Taylor yelling at you while walking down a snowy highway gets you super pumped up.—Amber Funk

Over the years, Korn have been known to produce some pretty eerie videos. The video for “Insane” aims to keep that streak alive, as it takes place inside an old-time photo studio, where a photographer is taking headshots of a corpse (yep). Korn showcase a return to their original sound with this heavy and emotional track, and the video’s ending is something straight out of a macabre short story. —Nikhail Gogia

The message of Melanie Martinez’s “Mrs. Potato Head” is clear: love yourself the way you are, and don’t change for anyone else. Illustrating that message in Martinez’s unique cinematic style, “Mrs. Potato Head” tells a sinister story that is supposed to make you sad, angry and uncomfortable all at once. Another mesmerizing piece in the visual puzzle of Martinez’s debut album Cry Baby, “Mrs. Potato Head”—while set in a creepy vintage era—makes a statement on today’s equally creepy 21st century. We’re all Martinez’s character in “Mrs. Potato Head,” struggling with society’s old-fashioned and small-minded archetypes of beauty. —Caitlyn Ralph

MEMPHIS MAY FIRE – “This Light I Hold” (Rise Records)

Who the hell kidnapped Jacoby Shaddix? Was that Levi Benton? Wait, was that also Danny Worsnop? These are all legitimate questions you will ask yourself when watching Memphis May Fire’s cinematic clip for “This Light I Hold.” Filled with an array of guest stars from Papa Roach’s frontman to the once, possibly, maybe, perhaps Cowboy King himself, “This Light I Hold” is more than just a music video; it’s a fun, adventurous step into a short film world with grand sets, a cliffhanger ending and an epic backtrack. —Natasha Van Duser

Neck Deep never fail to deliver with their high-energy videos, but “Serpents” is definitely something unique in itself. Jam packed with gritty animations and haunting imagery, this video gives off a much darker vibe than all of their others. And snakes. So many snakes… —Kaitlynn Veno