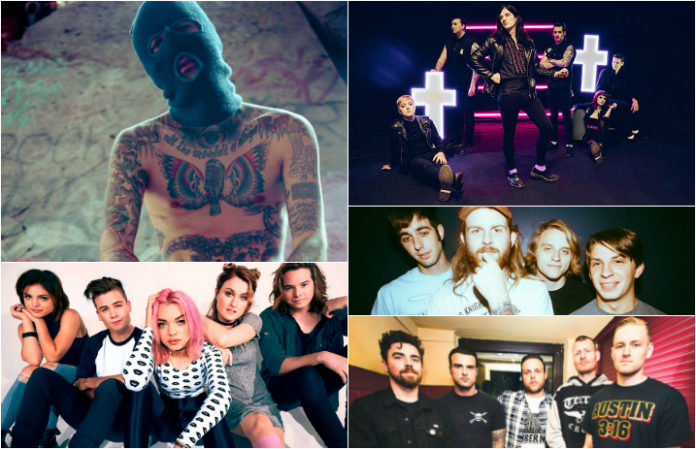 Do you have any idea how many records are released in any given year? That’s okay, neither do we. We do know that there are thousands of artists who release new music each year, from manufactured pop stars to local church choirs, and all of them are hoping to get your attention. In the midst of all those releases are EPs—an artist's way of giving us a small taste of new tunes. So through all the noise, here’s what stood out. Check out our favorite EPs from 2016, brought to you in partnership with our friends at Full Sail University.

Hailing from the U.K., this band is as fierce and proud as their name suggests. Aftermath, which ended up being the basis for their full-length debut Selfish Age, is as catchy and anthemic as it is heavy. This is the kind of hard rock sound you’ve been missing for the past few years, and it has finally re-emerged with the likes of songs such as the title track and “White Flags.” In an era where big rock bands either hang onto their integrity by keeping their heavy roots or totally sell out by going radio rock, it’s nice to know there is a band like As Lions elegantly bridging the gap. —Taylor Markarian

Craig Owens is no stranger to trying new things musically. From Chiodos to D.R.U.G.S. to his solo work and beyond, each project has its own vibe and story. With badXchannels, Owens does nothing short of we’d expect—and it’s perfect. Combining dark synths, heavy hip-hop beats and R&B-influenced vocal stylings, badXchannels’ WHYDFML delivers everything we’ve always loved about Owens’ music, with a modern, fresh twist. —Anthony Lauletta

Beach Weather's second EP is a definite step up from 2015's What A Drag. They master a blend of indie and synth vibes that makes you want to drive with the windows down or possibly dance in a field of flowers. They've already landed tours with pals and 8123 labelmates the Maine, as well as Against The Current and Sleeping With Sirens. From “Chit Chat” to “Sex, Drugs, Etc.” the Arizona-based band's EP is effortlessly catchy and leaves you wanting more. —Lindy Smith

You have to respect a band that releases an EP talking about how badly love sucks five days after Valentine’s Day, but let’s face it, that’s the time we need an EP like that the most. The Stranger is nearly begging you to lie in your bed at 2 a.m. staring up at your ceiling, listening to the rain dance across your roof while you think about the one that got away. If this is your first time listening to Creeper, shame on you. Luckily for you, they’ve released an EP every year since 2014 and they’ll be releasing their first full-length album in 2017. Just like misery never goes out of style, neither will Creeper. —Jordan Toney

At this point, Hey Violet are experts at reinvention. After a time as Cherribomb, followed by renaming themselves and hopping on two tours with 5 Seconds Of Summer, this quartet were only too eager to add another member and release a teaser of their latest sound. From the sultry first notes of “Brand New Moves” to the anthem of “Fuqboi,” this is a new era for Hey Violet—one that we’re very, very on board with. —Mackenzie Hall

LANY – kinda (Polydor Records)
CHOICE TRACK: “WHERE THE HELL ARE MY FRIENDS”

Led by the 1975—arguably one of the most talked about bands in the world right now—the alt-tinged indie-pop genre is an unstoppable flood of smooth melodies, addicting lyrics and eye-catching live shows that double as an art exhibit. In a waterlogged genre, LANY are a breath of fresh air—they’re interesting. They’re hip and accessible, but not boring. It’s music meant to put you in a good mood. The lyrics are fun but still relatable, easy to sing along with the windows down a cool fall afternoon. Before a nearly 40-date U.S. tour, LANY released kinda, an indie-pop triumph that cements their subtly colorful, charmingly youthful style. From the delicate intro of “yeah, babe, no way” to the rosy perfection of “pink skies,” the cohesive package is composed of tracks strong enough to exist on their own, setting LANY up for what could be massive mainstream success in 2017. —Caitlyn Ralph

Outgrown Things may be Movements’ emo-soaked debut, but there’s not much of a reason to think this is their first go-round. Infused with both impassioned introspection and raw relatability, Outgrown Things strings together the uncertainty surrounding growing up, from meeting expectations (“Nineteen”) to battling depression and anxiety (“Kept”).  With their debut LP set to drop in 2017, it’s clear Movements have the sheer potency to continue to make waves—and we can’t wait to see what emotionally charged journey they take us on next. —Maggie Dickman

Stick To Your Guns have always been a voice for the voiceless. Time and time again, they’ve released music that encourages you to think for yourself and fight back against any form of oppression. With Better Ash Than Dust, the band return to remind us how intense the socio-political climate is right now, and Jesse Barnett delivers their message with striking honesty. Five tracks jam-packed with edgy riffs and hopeful choruses, the project picks up exactly where the Orange County rockers left off from their 2015 album, Disobedient. —Nikhail Gogia

Sleep On It – Lost Along The Way (Equal Vision Records)
CHOICE TRACK: “With Friends Like You, Who Needs Friends?”

Chicago natives Sleep On It have been busy—and show no signs of easing up. Even though they just released this EP a couple months ago, they already have us excited for a full-length due out next year. Fans of both Take This To Your Grave and Life’s Not Out To Get You can meet in the middle with Lost Along The Way—just don’t shed too many tears before they announce that next record. —Mackenzie Hall

Sorority Noise – It Kindly Stopped For Me (Topshelf Records)
CHOICE TRACK: “Either Way”

Sorority Noise’s It Kindly Stopped For Me is a tender note sent down from the more-emotional-than-emo gods. Usually known for their gracefully upbeat instrumentation, Sorority Noise switched out the electric guitars for acoustic ones to mold a delicately introspective piece with whispering vocals that occasionally transcend into spoken word. What kindly stops when you’re listening to this EP is the world. Stopped is a short but fulfilling snapshot of poetry painted over four quietly profound tracks. —Caitlyn Ralph

Honestly: Who doesn't need more pop punk from Canada? Story Untold are here and ready to refresh the genre yet again. Recently acquired by Hopeless Records, this five-piece released this self-titled EP in May and have already toured with their heroes, Simple Plan. There are already whispers of more music in the works—and we are stoked. —Mackenzie Hall

Sometimes it takes a while for a band to realize their true potential, but that cannot be said for the White Noise. Already signed to Fearless Records, their debut EP Aren’t You Glad? has reached countless ears and has gotten them key spots on huge tours with bands like Dance Gavin Dance and I Prevail. The LA group have left an undeniable mark on the scene with the first six songs of their career, with songs ike “Picture Day” and “Brainwashed” setting them up to be one of the best modern punk bands in years. —Taylor Markarian