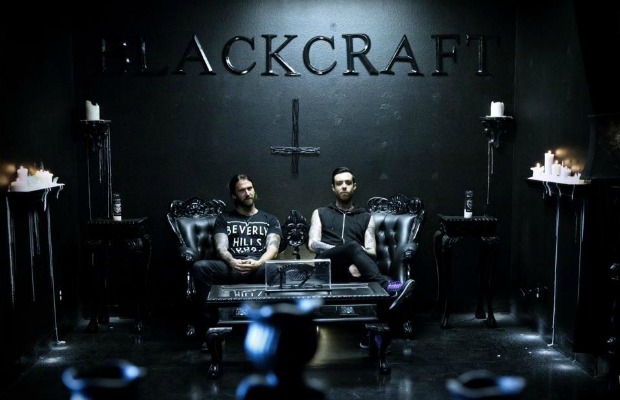 When you think of Blackcraft Cult, you think of awesome tees (like our fave, Lucipurr), accessories (coffee, anyone?) and their vocal opposition to hate groups. But Blackcraft is much more. They’ve recently announced plans for a public stock offering, so you can actually own a piece of the company co-owners and founders Bobby Schubenski and Jim Somers built with $100 and a strong belief in themselves. They can count everyone from New Years Day and Motionless In White to HIM and Slayer as fans and  created an active online community that’s hundreds of thousands strong and more like a family. With all those people who share the same worldview—or at the very least, good taste—in their social networks, it makes sense that the next step would be bringing them together through Blackcraft’s new matchmaking app, BCZodiac.

BCZodiac is like Tinder meets your daily horoscope, allowing you to find people who are in your vicinity and are a good astrological match for you. To celebrate the app’s launch, Blackcraft wants to launch you and a friend into space with a trip on the Virgin Galactic Starship. It’s a bit different than your regular enter-to-win contest. What, you thought an opportunity for space travel was going to be as easy as typing in your email address? Download BCZodiac from Google Play and soon on the Apple App Store), and receive 1,000 Zodiac points. Refer your friends, and receive more points. Anyone can enter, and anyone is eligible to win. The first 10 people to reach one million points will be entered in a final contest to become the world’s first Blackcraft Zodiac astronauts. Jim Somers tells us more.

How and why did you decide to create BCZodiac?
Jim Somers: It was mixture of many reasons, but mainly from using other dating apps and not getting any matches with any substance. As Blackcraft was morphing into a media company—with other apps we’re working on—it opened a lot of doors for new ideas. More than five billion people check their horoscopes every day, so BCZodiac quickly became our priority on the media side of things.

Why matchmaking? Was it just a natural extension of the community you’ve built around Blackcraft, seeing all these amazing people who would be perfect for one another?
I feel like you can have all the money and success in the world, but if you don’t have a good relationship with other humans then what’s the point? It’s been amazing to see people come together on the clothing side where it’s a real family vibe. When we see two strangers meet at a show and take a photo together because they’re both wearing Blackcraft shirts, it’s fucking awesome. With BCZodiac, our goal is to help people who might live in the same building or on the other side of the world, by using the science of astrology to help connect with their soulmate based on their astrological signs.

Since BCZodiac is all about the stars aligning, we just figured we would literally shoot for the stars with our marketing, too. Offering two astrologically conscious lovebirds a chance to win a trip on the Virgin Galactic Starship was so good it scared us, so we had to make it happen!

Have you always been interested in astrology?
We’ve both grown up around it, and my mum has been reading my charts for more than 20 years. Reading our horoscope is something both Bobby and I will do quite often. So BCZodiac was another natural progression for us.

It’s really cool that you’ve given your community the opportunity to actually become a part of Blackcraft with your stock spilt, but has there been any backlash or accusations of “selling out”?
It’s crucial for us, as we’ve grown the company, to be able to give back and allow people who continue to support us the chance to own a part of Blackcraft. We couldn’t have gotten this far without their support, so it’s a great feeling to be able to offer people the opportunity to own a part of what they’ve helped create. So for now we’ll focus on the positives: giving back and the growth of the brand rather than someone who’s bummed out and saying we’re “selling out” because we’re doing something constructive and passionate with our lives.

So what does the future hold for Blackcraft?
For BCZodiac, we’re doing an Instagram competition, and we’ll be giving away $2,000 to help promote the app. Visit our Instagram @bczodiac_ to see the flyer. More details on the trip to space will be on bczodiac.com soon.

What do you have coming up for fall?
We’ve kind of been against doing seasons from day one, but we’re always releasing new products as often as possible. We’ll have more limited edition items, and also a couple of new sock designs should be available really soon.

For more information on Blackcraft, visit blackcraftcult.com or their store at 1030 N. Main Street, Unit B, Orange County, California.