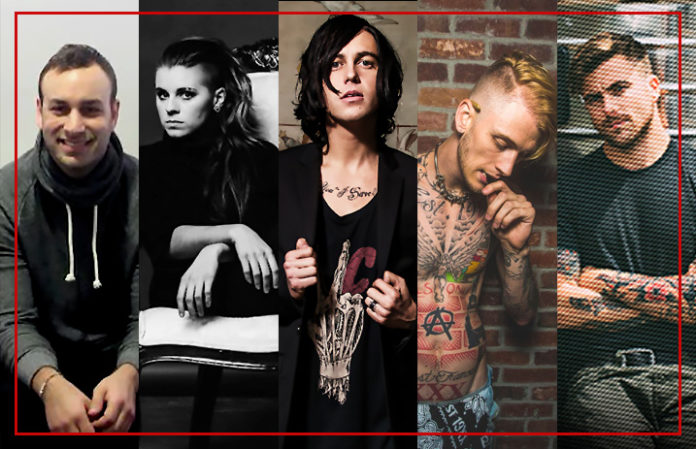 We can't predict the future, but we can assure you that 2017 will bring plenty of awesome new music. We talked to some of your favorite artists, who are in various stages of the recording process, to get the scoop on what's to come next year. Everything from heavy to pop punk, we'll be spending all week looking ahead at the Most Anticipated Music of 2017. Today we dive in with our Most Anticipated heavy albums.

Check out our Most Anticipated metal, punk/pop-punk, hardcore and heavy albums.

We spoke to: Anthony Green (vocals)
EXPECT IT:  Summer 2017
WHAT'S DIFFERENT: The band just took a year off, and we hadn’t really done that in a long time. We got together with a bunch of ideas, almost in the same way that we did with our first record, but it’s hard for me to say what’s different about it because I’m so close to it. But what is different for me is that it seems like the band had found such a seamless route between what we’re envisioning and what we end up walking away with.
BIGGEST CHALLENGE IN MAKING THE RECORD: This was actually the easiest, most therapeutic time I’ve ever had writing with the band. It took two weeks to put everything together and there was no pressure or doubt. But the challenges of making a record kind of stay the same every time—there’s always wanting to do the thing you possibly can and wanting to walk away from having completed it feeling like it’s finished and you’re proud of it. That’s how I gauge if something is complete, and I’ve never had so many moments on a Circa record where I’m like, “Holy shit! This is exactly what I wanted to say and how I wanted to say it.”

IS IT MORE DESCENSUS OR VIOLENT WAVES? I don’t think it’s either of them. I don’t even know what that means, to be honest—I used to think I knew what kind of band we were, but I feel like our dynamics are growing. There are definitely elements on this record that sound brand new for Circa, and there’s definitely stuff that sounds like classic Circa, but presented in a brand new way. I definitely think fans of the band will sit down and have some amazing moments that they’ve never had on a Circa record before. —Mischa Pearlman

We spoke to: Brian Sella (vocals/guitar)
Expect it: “Sooner rather than later, hopefully…”
WHAT’S DIFFERENT: On the last album, we did it real rock-star style. We went out to California, we worked with a big time producer, we took a long time to do it, and that was an interesting approach but we probably are not going to approach it that way again. Honestly, it’s so hard to say. I have no idea what the music is going to sound like until it’s done being recorded.
I think we’re going to try and do it more by ourselves, like with me and Matt [Uychich] producing it. Obviously, we’re not the best and we need somebody who has a better vision than us, so we’ll probably have somebody work with us, but it might just be a friend. That’ll be different, the whole approach of it. We just like to experiment. We’re artists and we think of these albums as art projects. It’s all-inclusive—you have the artwork, you got the name of the songs, the name of the album, you got the music—it’s like one giant art project. The way that it works itself out is a mystery, and that’s what we’re trying to find.
BIGGEST CHALLENGE IN MAKING THE RECORD: Probably just being confident that other people are going to like it. I don’t think there is a difference between making songs that I like to play with Matt and the songs that people hear, you know? So there’s that challenge of when we’re making the songs, you have to just be confident. This is the music we’re making and this is the art we’re making and people will like it, and they’ll like it because it’s genuine. Maybe the lyrics don’t make sense or maybe something is a little confusing but that’s okay—people will appreciate the fact that it came from a genuine spot. We just try to keep it real.

IS IT MORE THE FRONT BOTTOMS OR BACK ON TOP? I think it’ll be more like the self-titled. It is too early to tell, but we’re going to take parts of everything we’ve learned over our careers. The self-titled was a big part of our artistic development and so was Back On Top, so they’ll be influences of both those styles. —Griffin Elliot

ANDREW MCMAHON IN THE WILDERNESS / Zombies On Broadway

EXPECT IT: February 10, 2017
WHAT'S DIFFERENT:
On a sonic level, we've expanded the palette for this album in a big way. While we've stayed true to many of the keyboard textures found on Wilderness One [2014's Andrew McMahon In The Wilderness], there is a lot more guitar work on this record. The songwriting is really focused and thematically driven.
BIGGEST CHALLENGE IN MAKING THE RECORD:
I wrote and recorded most of the album in New York while juggling a pretty intense tour schedule. Being gone from home for the better part of two years takes a toll, and played into the themes on the album.

IS IT MORE ANDREW MCMAHON IN THE WILDERNESS OR EVERYTHING IN TRANSIT? I think it stands on its own, but there are definitely some elements of early Jack's Mannequin kicking around on these tunes.  —Annie Zaleski