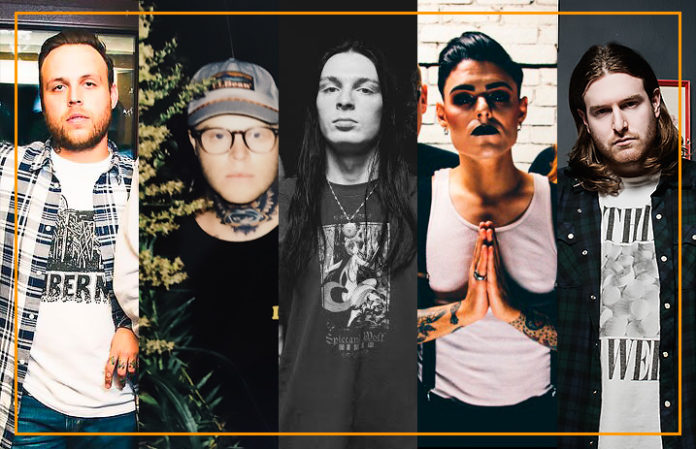 We can't predict the future, but we can assure you that 2017 will bring plenty of awesome new music. We talked to some of your favorite artists, who are in various stages of the recording process, to get the scoop on what's to come next year. Everything from heavy to pop punk, we'll be spending all week looking ahead at the Most Anticipated Music of 2017. Today we dive in with our Most Anticipated hardcore albums.

Check out our Most Anticipated metal albums here and punk/pop-punk here.

We spoke to: Chadwick Johnson (vocals)
EXPECT IT: Summer 2017
WHAT’S DIFFERENT: It’s gonna probably be a pretty big departure from our last record, which is intentional because we don’t want to get caught in the same place ever. We have our original guitar player Alex [Blackwell] back with us now, so I think the energy’s just kind of moving in a different direction—a completely different direction. So far, all the demos are different from anything we’ve ever done, which is scary, but it also feels good. We could probably write an entire record just like Free like in a week. It would take us a week to do it because that’s an easy record for us to write; like that’s who we’ve been for the past seven years. So I think that we can release it and go on tour and that would be like the safe move, but none of us really think there’s any spine in that game. We feel like we would be sacrificing our abilities, just kinda staying in the same place, which is what a lot of bands do, but we’d rather just do what we want to do. I think we’re definitely pushing the boundaries of what we can do, but I think at the end of the day, we’d rather put something out where everyone is just like, “What the fuck?” than to deliver something that’s just kind of cookie-cutter—hate to say this—melodic hardcore. And if people want that, there’s a plethora of bands that are all writing the same record over and over again, so go listen to them.
BIGGEST CHALLENGE IN MAKING THE RECORD: Making decisions on what we want to do with vocals. The music is coming out really easily for us because it’s like the vibe we were all on. Me and Alex are mainly writing all the songs and we already like a lot of the same bands or just listen to the same kind of older styles of music. But so far, every time I go to put vocals on one of the new songs, I’ll have like a thousand ideas, but I just can’t decide what’s right. Do I sing, do I do some spacey yelling over this part? I don’t know. We’re just trying a bunch of stuff and seeing what lands. And we’re gonna be in the studio for like six weeks on this record, so we’re probably gonna go in with a shit ton of ideas. It’ll be different than what we’ve done before, which is cram 10 songs into three weeks or something. We might lose some people along the way, but that’s completely okay.

IS IT MORE LET GO OR FREE? I would say it’s nothing like either. Just the whole tension is different. We don’t wanna write like a punk, heavy part record like both of those records. Not to say that I hate those records, but at this point in all of our lives, I think we wanna do something a little different. We’ve always done that as far as different aspects of the band, like merchandise or branding or any of that stuff, we’ve always done different things that other bands weren’t doing at the time, but they kind of ended up there a little bit after us—not to say that we’re some groundbreaking band that’s changing everything. But it’s just things I’ve noticed along the way that were risky for us to do at first, but they ended up paying off in the end. It’s us doing that with the music, rather than just the other aspects of the band. —Rabab Al-Sharif

NEXT PAGE: STICK TO YOUR GUNS