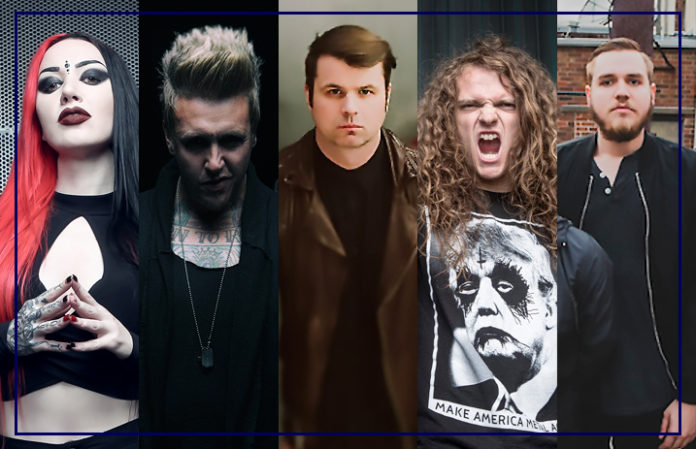 We can't predict the future, but we can assure you that 2017 will bring plenty of awesome new music. We talked to some of your favorite artists, who are in various stages of the recording process, to get the scoop on what's to come next year. Everything from heavy to pop punk, we'll be spending all week looking ahead at the Most Anticipated Music of 2017. Today we dive in with our Most Anticipated heavy albums.

Check out our Most Anticipated metal, punk/pop-punk and hardcore albums.

We spoke to: Jacoby Shaddix (vocals)
EXPECT IT: Early 2017
WHAT'S DIFFERENT: What’s different between now and back in the day? So, our last record, we worked with the Churkos [Kane and Kevin], and pretty much we went in there with no material and did it right on the spot. This time around, we went back after we were on tour. We finished up in Europe and cancelled the rest of our dates because of the terrorist attack over there. We came home and took a little break. Then after that, we were like, “You know what, let’s start writing, let’s start being creative.” We went to our spot in Sacramento and started writing music and shedding wood in there. We were just having fun with it and experimenting. When it came time to decide—when we were going in for the record—we wanted to switch it up. We wanted to work with some new producers. It just seemed like the material we were writing at the time was a little more outside the box. We wanted to work with some up-and-coming [people] who are the fresh, young producers. Me and Louis, our manager, suggested these two guys by the name of RAS and Colin Brittain. We went in, and we did a track with them. We did this track called “My Medication,” and right after we did that, we were like, “Those are the motherfuckers we’ve been looking for.” You know, the new, fresh, different squad who just have a dope perspective on music. RAS comes from the electronic world as well as the pop-punk/rock world. Colin is a rock drummer, so just those two crazy cool and creative individuals, we welcomed them into the P. Roach family, and we went into the studio and finished up this body of work that all of us believe is our best album ever to date. Whatever sells is whatever sells sonically, but message-wise, it gets on a whole other level. I just kind of felt like rock music is starting to sound the same and get a little bit homogenized, and we want to carve our own path. We were considered a nü-metal band back in the day, but we always kind of had our own vibe and our own edge, and we want to maintain that as a band. This record is bold and adventurous, but I believe that it’s all things great about Papa Roach. People want the old school P. Roach sound, but the sound of 2017 is where we’re at now. I’m just so proud and so happy about it.
BIGGEST CHALLENGE IN MAKING THE RECORD: [Laughs.] You know, I’ll just go ahead and leave that unsaid. I guess maybe my biggest challenge personally would be wanting to sing. I just wanted to fucking rap all over this entire record. I was just having so much fun rapping on all these tracks, and then I’d turn around and be like, “Fuck, where’s the melody?” So, we went in, and we wanted to write those big, hooky choruses that we’re known for, but I just wanted to, I don’t know man, sing in the verses like, “Blah, blah, blah.” I hate going in, especially with what I wanted to say on this album. I guess the climate of the world, of what’s going on politically, personally, socially—I couldn’t sing it, man. I had to shout it. I’d say that was my biggest challenge was finding that balance. I think once we did that, once I found that balance, I think that we were off to the races.

IS IT MORE THE CONNECTION or F.E.A.R.? To be honest, the albums that I can compare it to, I would say this album would be, in my mind, kind of like a cross between Infest and Getting Away With Murder. I feel like if we took those two albums and smashed them together, that’s where we’re at now. —Rachel Campbell

We spoke to: Cody Quistad (guitar/clean vocals)
EXPECT IT: Summer 2017
WHAT'S DIFFERENT: I feel like we really took the time to grow as a band. It’s been a really cool year for us, and having the time to play together a lot really reflects on this album. It’s probably the truest form of a Wage War album to come out. We had a lot more time to make sure these songs were right. Sonically, it’s got a little something for everybody—for the people that like the heavier side of our band, there are some really heavy songs, and for people who like the more melodic side of our band, there are some really melodic songs. I feel like we really pushed the envelope.
BIGGEST CHALLENGE IN MAKING THE RECORD: Probably just picking songs. We had about 18 to 20 ideas going in, and we whittled it down to around 12. So going through all the songs and honing in on the ones we thought were appropriate for the album was our biggest challenge. Everything else was a really smooth process.

IS IT MORE THE FALL OF KINGS (the album they recorded as Empires) OR BLUEPRINTS? It’s more Blueprints, but it’s kind of a thing of its own. It’s hard to describe: It definitely harbors influences more from Blueprints, but we really just took influences from pop music or rap music, hip-hop, R&B and metal, and mashed everything that we love about those genres together in the best way that we could. —Mischa Pearlman