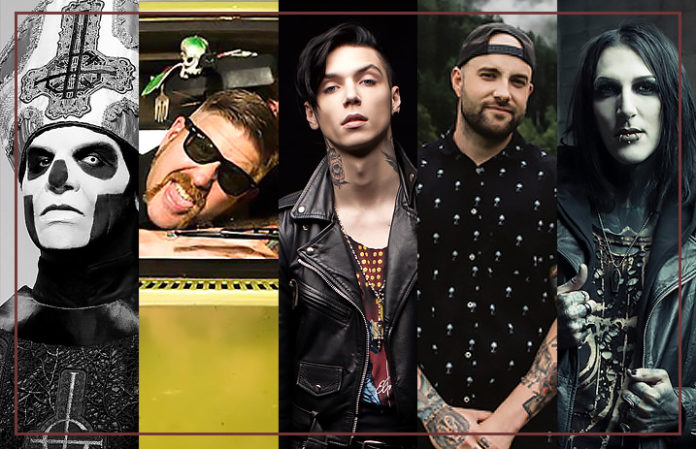 We can't predict the future, but we can assure you that 2017 will bring plenty of awesome new music. We talked to some of your favorite artists, who are in various stages of the recording process, to get the scoop on what's to come next year. Everything from heavy to pop punk, we'll be spending all week looking ahead at the Most Anticipated Music of 2017. First up: Our Most Anticipated metal albums.

We spoke to: Andreas Kisser (lead guitar)
EXPECT IT: January 13, 2017
WHAT'S DIFFERENT: Derrick [Green, vocals] stepped up a lot, especially on the lyrical side. He and I talked a lot about different movies, documentaries and books. We go after song titles and stuff, and then he develops the lyrics. I think it’s his best work. Paulo [Pinto Jr., bass] as well—he did a lot of the pre-production work, which was something he was very lazy about before. Always waiting til the last minute to go to the studio to try and work the producer and stuff, which is fine, but I think this time he was a lot more prepared. Also, the cover is very colorful, very different from the last album. [It’s by] an artist from the Philippines—it’s a new vision, it’s fresh blood in the business, in the metal. We know so many artists, but Camille [Della Rosa] really brought something special and new for us, and that also brings a little bit of a new element to our music.
BIGGEST CHALLENGE IN MAKING THE RECORD: Every album is a big challenge. We have a 32-year career—many albums before, different formations. The biggest challenge was to try and explore and try to break our limits. We wanted to make the best album we could possibly make. We brought some Brazilian rhythms, different from the rhythms we’ve used in the past. Just try to explore different territories, try to break our limits and I think we achieved that. I’m very happy with my guitar work, and Paulo’s and Derrick, and Eloy [Casagrande, drums] is a monster. It’s something very special. It’s a lesson in drumming, this album; it’s an amazing performance. Very powerful, very energetic—technical but with a lot of heart and groove. It’s an album that I enjoy listening to.

IS IT MORE THE MEDIATOR BETWEEN HEAD AND HANDS MUST BE THE HEART OR KAIROS? I guess neither one. They are very different albums. Kairos was the last album we did with Jean Dolabella and The Mediator was the first album we did with Eloy on drums, which brought a lot of amazing possibilities for the band. He’s an amazing musician, and now he’s been with us for five years and [we’re] really more connected; we know each other a lot better. Working on this album was easier to work with him. Everything started doing some guitar riffs and drum loops and developing all the ideas from there. It’s a more musical album. Worked a lot more on the details. There’s a lot more melody. The first song, “Machine Messiah,” is very melodic and slow-paced and intense, a lot of guitar leads. We have violins from Tunisia in a few songs. A horn quintet from a guy from Brazil here in some songs as well. An instrumental song with classical guitar and lots of Brazilian rhythms. I think we explored our musicianship a lot more. We worked toward breaking our limits, trying to do our best. In the end, Jens Bogren was an amazing producer who was a perfect choice. He’s a young guy with amazing knowledge, and he’s a great musician. We really think it’s our best work ever and we are really happy and really excited about the release of the album and getting ready to go to the stage and start touring. —Stevie James

The Grammy-winning theatrical metal band will put out their fourth full-length record this year. The ghoulish rockers have yet to reveal the title or release date of the record—or really any specific details about the album—but they have made one thing very clear: their work ethic is as inhuman as their persona. The album was written and went into production in a matter of just a couple of months, a feat that usually takes most bands at least a year or two to accomplish. What the future holds for this band in terms of sound and scheme is uncertain, but if it's anything like their previous work, it's going to be big, strange and otherworldly. —Taylor Markarian

NEXT PAGE: SUICIDE SILENCE/RINGS OF SATURN