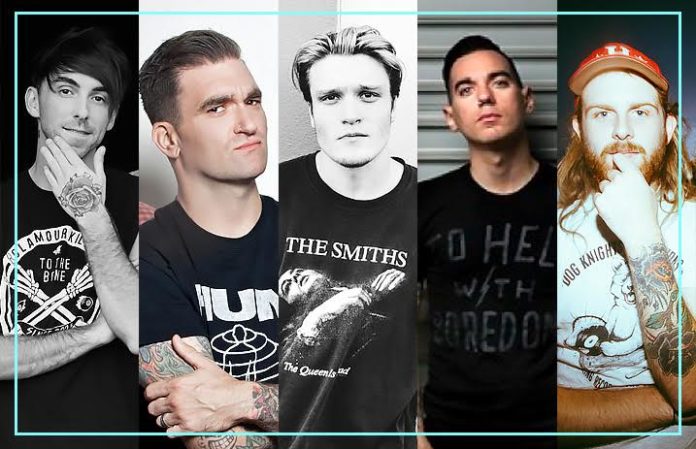 We can't predict the future, but we can assure you that 2017 will bring plenty of awesome new music. We talked to some of your favorite artists, who are in various stages of the recording process, to get the scoop on what's to come next year. Everything from heavy to pop punk, we'll be spending all week looking ahead at the Most Anticipated Music of 2017. Today we dive in with our Most Anticipated punk and pop-punk albums.

Check out our Most Anticipated metal albums here.

SLEEP ON IT / TBA

We spoke to: TJ Horansky (guitar/vocals)
EXPECT IT: Summer 2017
WHAT'S DIFFERENT: We just put out an EP [Lost Along The Way] less than a month ago and we are already going back into the studio almost exactly two months from today. So we pretty much didn’t stop writing from the EP. But I think we wanted a more focused EP; we didn’t want to get too crazy with it. On the full-length, we’re really going to push the boundaries a little bit more; we’re gonna have a little bit more diversity in the songs. We’re really kind of tapping into a lot of our different influences more than just the straightforward pop punk. But at the same time, it’s still gonna be very us, and the sound we’ve been trying to narrow in on. I think we’ve been trying to push ourselves as songwriters. Me and Zech [Pluister, vocals] are really putting a focus on lyrical content as well, so I think that’s definitely gonna be a noticeable difference.
BIGGEST CHALLENGE IN MAKING THE RECORD: I think right now, the biggest challenge is probably the time crunch, which, for me, sometimes works better. I’ve always been a “do it before the day it’s due” kind of guy. I work better under pressure; it motivates me. But it was a pretty quick turnaround between the EP and going back into the studio for the full-length. So that’s been a challenge, but I think we’ve kind of embraced that and we already have probably 14 to 15 songs written. I think probably eight or nine are fully written, a couple are just ideas and stuff. We’ve just been kind of riding this wave of songwriting. We were just kind of feeling in the zone. So we’re still writing; we’re probably gonna keep writing up until we go into the studio in January, but we want to have a lot of those song ideas ready to go so we can kind of pick and choose which ones we like the most for the record.

HOW DOES IT COMPARE TO LOST ALONG THE WAY? I think it’s really gonna show people that we’re definitely very rooted in the pop-punk scene, but we also want to push the boundaries. That’s really what we’re trying to show people with this full-length—not that we’re trying to reinvent the wheel or anything like that, but we really want to create our own little niche in this bigger pop-punk scene. And I think that stems from some different influences, and what we really enjoy listening to outside of the predictable bands. There’s a really strong focus on the songwriting, and the lyrical content and melodies. We had a chance to go down to Nashville and write a little bit with Will Pugh from Cartel, that was a really awesome experience. He obviously has a great songwriting mind, and he had some great input on some of the songs we’ve been writing. We’re also hoping to bring Derek [DiScanio, State Champs] back into the studio. He helped us with the EP, so he’s gonna be back in the studio with us again, helping with a little bit of production and vocal melodies. So we’re tapping into these outside sources, too, to hone in what we have going and make it the best product that we possibly can. —Mackenzie Hall

We spoke to: Justin Sane and Chris #2
EXPECT IT: Summer/Fall 2017
WHAT'S DIFFERENT: #2: One of the things we’re looking at—it may be the first time we’ve gone after this—is with the election of Donald Trump, there’s this emerging theme of no more “next time.” No more putting us in this position of voting for the lesser of two evils. If we are going to create the ability for people in third and fourth parties to have space in American politics, it needs to start on day one, in the first 100 days of this Trump administration. So laying that groundwork, speaking to our community of punk rockers about that with the record, and hopefully they branch out.
Sane: I would add that, regardless of what name is given to racism, xenophobia, bigotry, whether it’s the title of Nazi or white supremacist or alt-right, we need to confront those things. And when you have a person in the position of power that Donald Trump will be in, it is more than important than ever to confront those things as individuals and as artists across the entire country.

BIGGEST CHALLENGE IN MAKING THE RECORD: Sane: It’s interesting…it took a change. We had some songs written when we were preparing to attack Hillary Clinton and try to challenge her to be a politician who cares more about the public’s interest than maybe her track record would let us know. So we’ve had to shift some gears and focus on new things some of the newer songs are angrier. I think there are a lot of eyes on us now because Donald Trump was elected and I’m not sure if we’d be having this phone call if he wasn’t. [Laughs.]

Ten years from now, I believe we are going to be on the right side of history. When people say, “Wow, how did people in 2016 elect a racist bigot and sexual predator?” I want to show the record and say, “Well, we stood against it and a lot of people stood with us.”

#2: I think the biggest challenge right now is to not get ahead of ourselves. There’s a lot of dust in the air and we need to let it settle. When you’ve been in a band this long, you learn is that knee-jerk reactions are not necessarily the best standing documents sometimes.

So when you start a band, you have this semblance of belief that you can write a song and the world will change the next day. And then after you’re in a band for 20 years, you realize it is much more slow and incremental process of changing the world via punk rock. That being said, with this record, we are seeing a horrible president, the world refugee crisis, the largest divide in equality that we’ve ever seen, the police murdering two people per day in America. These are huge topics that demand thought and care. That’s a challenge.

IS IT MORE UNDERGROUND NETWORK OR AMERICAN SPRING? #2: It's a little too early to answer the question definitely, but it's somewhere between our tentpole records: For Blood And Empire, American Spring and The Terror State. —Gen Handley