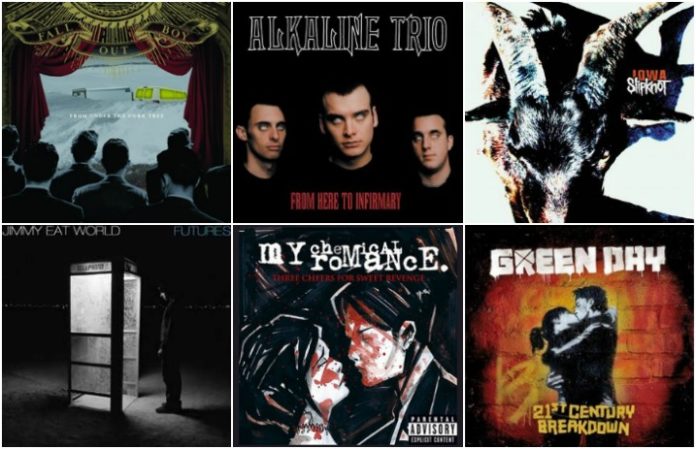 Around the AP office, it would be a supreme understatement to say our tastes “vary.” From the heaviest metal to the poppiest superstars, we all love some vastly different records. We asked members of our staff to pinpoint the most underrated deep cut from their favorite album. Here’s what they said…

Read more: Our staff came up with our dream tour lineups and things got a little crazy

ALKALINE TRIO
“Steamer Trunk” from
From Here To Infirmary (2001, Vagrant)

When you're a part of the Trio cult, it can be difficult to remember which songs are actually “deep cuts” because so many of them are fan favorites. But with it's dark lyrics and bouncy chorus, “Steamer Trunk” is a good starting place for anyone who isn't already devoted to the heart and skull.—Rabab Al-Sharif, Digital Content Editor

FALL OUT BOY
“Sophomore Slump Or Comeback Of The Year” from
From Under The Cork Tree (2005, BMG)

With songs like “Dance, Dance” and “Sugar, We're Goin Down” on an album, it's difficult to get anyone to listen to the deep cuts. And yet, this track from Fall Out Boy's breakout album From Under The Cork Tree has become a fan favorite. With some of the most meaningful and intricate lyrics they've ever produced (and for Pete Wentz, that's saying something) along with a stunner of an opening, it cements itself as an emo banger. (Yes, we’re making that a thing.) —Mackenzie Hall, Managing Editor

Glass Animals are known for their mysterious, dark and sexy melodies, but “Hazey” is a perfect encapsulation of what they're about. The progressing rhythms as the chorus mounts make the song an addicting experience, as it fits perfectly into the animalistic theme of the 2014 album.—Skye McEowen, Editorial Intern

Good Charlotte's 2000 debut album was my gateway drug into the punk/alt music scene at the tender age of 11. “I Don't Wanna Stop” is the perfect mix of a catchy rock beat and cute lyrics. It's basically a John Hughes movie as a song, and I dare you to not dance while listening to it.—Lindy Smith, Weekend News Writer

Green Day are simply stunning on this hidden gem from their epic 21st Century Breakdown. Punk rock meets a soaring ballad through the unforgiving lyrics of “Last Night On Earth,” evoking an indescribable emotion that creeps up on me every time I listen.—Caitlyn Ralph, Digital Assistant/Head News Poster

JIMMY EAT WORLD
“The World You Love” from
Futures (2004, Interscope)

Even though this album was released before I even entered high school, it took years for me to truly appreciate every single track from Jimmy Eat World on their 2004 release, Futures. While the entire album is a classic to me, the overall nostalgic quality of “The World You Love” and the subtle build-up in from the first verse into the rest of the song will always give me goosebumps.—Krysten Sulin, Account Executive

While this track has not gone unnoticed (remember that 2013 Daytrotter session?), it’s easily one of the most heartrending tracks on Can’t Stop Won’t Stop that deserves a little shoutout. There’s the beautiful acoustic guitar and John O’Callaghan’s stunning vocals and lyrics that still make my emo heart feel so many things. What’s not to love?—Maggie Dickman, News Writer

This profound Three Cheers For Sweet Revenge B-side gets very little love—perhaps because it doesn’t necessarily sound like a typical My Chemical Romance song. Rather, it sounds like the feeling of watching clouds race your moving vehicle in the rain. I’d argue, however, that this underappreciated ballad is the solemn anthem of the Revenge era. While MCR claim the first time they “broke the fourth wall” was in 2010’s “Vampire Money,” “Desert Song” may be the band’s most honest examination of their own career, referencing that deep “this or the world will end” frantic passion of that era, as if it were a mission bestowed upon them to “spend the rest of their days rocking out just for the dead.” There’s a palpable weight of responsibility in the song, and at once, a feeling of being caged and examined (“Did you come to stare/Or wash away the blood?”). It’s macabre, it’s desperate, it’s ethereal. It is every burning, bleeding thing that the band were in 2004. “Desert Song” captured a moment for a young, reckless band struggling with the idea of their own mortality, breaking themselves for what they believed in and learning to use the power with which they had been bestowed as humans with human flaws and limits. It was a carnage-ridden battle path, not just putting on a show. It was sheer desperation to survive said show and knowing that they very well could die trying.—Cassie Whitt, Freelancer

MY CHEMICAL ROMANCE
“Party Poison” from
Danger Days: The True Lives Of The Fabulous Killjoys (2010, Reprise)

My Chemical Romance's last album has been unnecessarily maligned by many for not being The Black Parade Detour, taking on classic rock, unashamed dance tropes, middle-of-the-road pop and some nü-metal. But there's some swinging fists of straight-up, genre-deficient, furious rock-and-hot-buttered-ass-roll as well, and that's where “Party Poison” brings the goods—and the cops, if you play it loud enough. From the tandem guitar crunch to Gerard Way looking at himself through Iggy Pop's prism (“streetwalkin' cheetah with a capital 'G'”) to the frantic Japanese femme seemingly losing her shit (Gerard's nod to Bowie's “It's No Game (Pt. 1)”), your parties will never break down if you put this wild bastard on repeat play.—Jason Pettigrew, Editor In Chief

SAVES THE DAY
“The End” from
From Sound The Alarm (“most underrated STD record EVER”) (2006, Vagrant)

SHAI HULUD
“To Suffer Fools” from
Reach Beyond The Sun (2013, Metal Blade)

An adage so painfully true and ever more pertinent, it could only be made this rationally blunt by Shai Hulud: “To suffer fools is to exist.” Crafted by chief guitarist Matt Fox, bassist Matt Fletcher, vocalist Chad Gilbert (New Found Glory) and drummer Matt Covey (Such Gold), the track’s ubiquitous message is perhaps even more applicable now than it was upon its release in 2013. Musically, it's the most incongruous recording ever laid down by the legendary metalcore band, yet its cerebral spite and diametric abandon are all the better for it. Clash, and clash hard.—Philip Trapp, Metal/Hard Rock News Writer

A powerfully dynamic roller coaster ride of a song that blends loud and indistinguishable rage with quiet insanity, “Gently” will literally give you nightmares.—Stevie James, APTV Correspondent/Merchandise Assistant

TAKING BACK SUNDAY
“I Am Fred Astaire” from
Where You Want To Be (2004, Victory)

While there were a ton of hits on Taking Back Sunday’s first two records, “I Am Fred Astaire” was a tune as passionate as any. With a steady drum beat and heavy guitar feedback, Adam Lazzara’s emotional pleas ring out in their iconic sound. This song had you singing along to all the vocal harmonies (which is common practice for TBS), and is a fine emo deep cut you probably don’t listen to enough!—Nikhail Gogia, News Writer