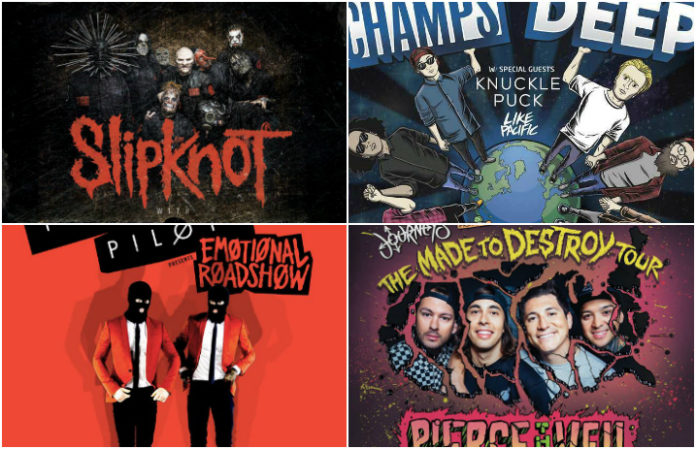 This tour took me back to 2012 when the Maine and Mayday Parade toured together, but this time the venue was bigger—as was the crowd. I’ve seen both bands live dozens of times and was still blown away by their stage performances. The Maine have really loosened up on stage and their interaction with the crowd was, yes, a crowd pleaser. Mayday were absolutely phenomenal on this tour and the set list was perfection. Hearing them play “One Of Us” live was a tearjerker for me, and I’m not ashamed to say it! —Lindy Smith, news writer

MADE TO DESTROY TOUR—Pierce The Veil, Neck Deep, I Prevail

Pierce The Veil blew away any and every expectation on the Made To Destroy Tour. Beyond the confetti showers and elaborate light show, the concert was simply a jam-packed celebration. I Prevail opened the show with an explosive performance, and Neck Deep proved they earned the title of Best Live Band at the APMAs with their energetic blast of pop punk. Headliners Pierce The Veil played fan favorites, both old and new, with seemingly everyone in attendance singing along from start to finish. There were three great bands and an electrified audience. What more could you ask for? —Maggie Dickman, news writer

The first show I ever went to when I was 13 was Good Charlotte’s The Young And The Hopeless Tour, and man, did this take me back. Although this was GC’s first tour in years, there was no stage rust. It was so amazing to see such a span of ages in the faces in the crowd—all of them singing along at the top of their lungs. The energy on and off stage was exploding. —Rabab Al-Sharif, digital content editor

SPEAK LOW IF YOU SPEAK LOVE—Speak Low If You Speak Love, Homesafe, Let It Happen

There are not many people I love more than State Champs’ Ryan Scott Graham, and I was stoked to see his first tour with his “Wussy Rock” band Speak Low If You Speak Love. It was a cool adjustment from seeing him play in large venues with State Champs to small bars with Speak Low. The band sound exactly the same—if not better—live as they do on their record. While there were maybe 40 people in the crowd, Ryan and the rest of the band kept up their energy and the crowd’s during the whole set. I definitely lost my voice that night from singing. —Lindy Smith, news writer

If Warped Tour is my Disney World, Real Friends were my Mickey and Pals. Screaming “Summer” from the front row in the middle of the hot July afternoon was only surpassed by a meet and greet hours later. Add in the 16 other bands I caught and a backpack full of $5 CDs, and Warped Tour 2016 can be filed as one of the happiest days of my life. —Shelbey Surgent, designer

WE’RE ALL IN THIS TOGETHER—Escape The Fate, Hellyeah!, New Years Day, From Ashes To New

I had the privilege of working for Escape The Fate on this tour as a photographer, videographer and merchandise manager. As a longtime fan of ETF, I was extremely excited to get the job offer and immediately jumped on it. I got to capture the daily life of the Escape The Fate boys, both on and off stage. I got to know each of them and they brought me into their family quickly. It was like touring with five big brothers who went to the gym every morning and left the crowds in complete awe every night. They're one of the most exciting bands to watch live, because each member brings his own personality into the live show. If you haven't seen the band live, you're missing out! Hellyeah brought that Southern rock to the show, and they were all fantastic to work with and very personable. Not only is their drummer, Vinnie Paul, a legend for his incredible talent, but Chad Gray (vocals), Tom Maxwell (guitar), Kyle Sanders (bass), and Christian Brady (guitar) made sure that I was having a great tour every single day. Their crew really knows how to take care of the entire crew on tour. I worked for New Years Day on a tour a month prior to the We're All In This Together Tour, and I was so excited to get to watch them nightly on another tour! From Ashes To New were the perfect opener to this tour and they brought that new school sound to the hard rock scene! —Kay Enagonio, APTV correspondent

What's amazing about a tour as stacked as this one is that it almost doesn't seem real. You have a band like the Wonder Years, who are already legends, joined by bands that will easily reach that status in the future. Every band fed off each other's energy which truly resulted in an amazing show. Years from now, people aren't going to believe that all of these bands were on the same tour together, which truly made it one of the best tours of 2016. —Jordan Toney, news writer

THE AGGRESSIVE TOUR—Beartooth, Every Time I Die, Fit For A King, Old Wounds

This action-packed, 32-stop tour took place over a span of just 41 days, and boy was it a lot of fun. There was nonstop energy from start to finish—scream lyrics, pit­, crowdsurf, repeat—there was no shortage of excitement. This tour featured a lot of really quality heavy acts in one place, and rightfully so, as Beartooth headlined in honor of the release of their second record, Aggressive. Any show that keeps the crowd on their toes for its duration is a blast, and the Aggressive Tour encouraged everyone to quit standing still and unleash your energy with some friends. —Nikhail Gogia, news writer

It was Twenty One Pilots' biggest tour yet, and they still found new ways to reach more members of their ever-growing audience, whether it was by performing on B stages, crowdsurfing in a hamster ball or bringing out the good ol' drum platforms. From goofing around on covers with Mutemath and Chef'Special, to Tyler's somber piano playing on the quiet moments of “Goner,” to the water splashing off drums under a storm of confetti during the finale, it doesn't get old. Bring on part two. —Anna Grace Geddes, editorial intern

IN OUR BONES WORLD TOUR—Against The Current, CRUISR, Beach Weather

Needless to say, 2016 was a successful year for Against The Current—and 2017 just might be even better. After completing a summer on Warped Tour, the Fueled By Ramen pop-rock geniuses brought their In Our Bones Tour around the world, supporting a debut of the same name. On the recent U.S. leg of that world tour, which featured indie pop up-and-comers CRUISR and Beach Weather, Against The Current proved they are ready to be headliners:  frontwoman Chrissy Costanza commanded the stage with charismatic energy, pulling the audience in with her powerful vocals and likeable on-stage banter. Since I saw Against The Current at their first show in Tampa, Florida, a few years back, Costanza and Co. have brought their live show to the next level. —Caitlyn Ralph,  news writer

Two of the most iconic names in heavy metal paired with one of the genre’s most promising up-and-comers? Sold. Of Mice & Men set the stage in their all-black attire featuring an inspired performance from Austin Carlile. Once Manson appeared, the entire atmosphere changed into a translucent enigma of gloom and despair parlayed with solemn chuckles throughout the crowd. Finally Slipknot laid waste to what was left and we all went home a little darker, smarter and more metal than before. —Stevie James, APTV correspondent

The first of many “oh my god, this is the best pop-punk tour I’ve ever seen” lineups this year, this Neck Deep/State Champs co-headliner was a sight to behold. Since both bands have been grinding on Warped the last few years, this was finally a time to catch them play a headlining set—as well as see the great support of rising stars Knuckle Puck and Like Pacific. —Mackenzie Hall, managing editor

Blink-182, A Day To Remember, All Time Low, the All-American Rejects

The kings of modern pop-punk’s mammoth, sold-out amphitheater tour simultaneously felt like a victory lap and the start of the next chapter. There were callbacks to the past (the flaming FUCK sign Blink proudly flew in 2001) and, with Matt Skiba now comfortably in place, nods to a bright future. Add in A Day To Remember’s expert showmanship and All Time Low and the All-American Rejects kicking things off with their own sets of hits, and you had the recipe for a tour every pop-punk fan in America was totally stoked over. —Evan Lucy, contributing writer

Seeing Brand New play their classic Devil And God in full live was a spiritual experience. Knowing how much that record means to so many people and screaming it at the top of your lungs with a few thousand other fans is priceless. —Rabab Al-Sharif, digital content editor