Tyler, The Creator, the Strokes and more ignite Outside Lands stages

The festival also featured many other artists, including Claud, Evann McIntosh, Moses Sumney and Glass Animals.

Outside Lands returns each year at Golden Gate Park in San Francisco for a massive three-day festival featuring a musical lineup of big-league performers and artists on the rise.

Usually held in August, the 2021 dates were a sweet treat—falling on Halloween weekend for the first time in its 13 years of existence. The crowd was filled with ecstatic Power Rangers, fairies and everything in between, ready to be back on the grounds after the festival’s year-long COVID-19 hiatus and altered schedule.

Read more: In issue 400, twenty one pilots reveal the importance of their community

Friday was famous for placing polarizing headliners, Tyler, The Creator and the Strokes, on opposite ends of the grounds during the same set time.

Tyler, The Creator greeted fans with his excitement for his first appearance at the festival. “This shit is beautiful,” he said as he looked out over the sold-out crowd, admiring the rolling fog and diverse faces in the audience. Known for his detailed stage design, his set mirrored the aesthetic of his latest release, Call Me If You Get Lost. The rapper breezed through five hits off the album, including “CORSO,” lit up by fireworks and “LUMBERJACK” as an electronic speedboat bobbed alongside him.

The rest of the set flowed evenly through the majority of Tyler, The Creator’s discography, touching on older popular tracks “She” and “IFHY,” closing with tracks on IGOR such as “EARFQUAKE” and “NEW MAGIC WAND.” 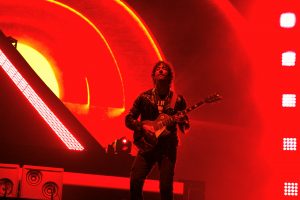 [The Strokes; photo by Jacob Alvarez, edited by Paige Strickland]

On the main stage, alternative-rock legends the Strokes showed up 20 minutes late for their headlining set. The band walked out to “Call It Fate, Call It Karma” and followed it up with Room On Fire track “The End Has No End.” After a few technical difficulties, Julian Casablancas and company played the entirety of their set under minimal lighting, with visuals that tweaked and transformed the band members on screen. Almost expected, Casablancas went on several rants during their set, citing disdain for the sound quality as well as COVID protocol in San Francisco.

Casablancas seemed to shrug off his complaints, giving fans performances of classics “Juicebox,” “Someday” and “Reptilia.” The band also dedicated much of their set to tracks off the latest record, The New Abnormal, such as “Bad Decisions” and “The Adults Are Talking.” Seeing the Strokes play has become somewhat of a rare occurrence, with the band exclusively playing festivals, making for a special performance for the many generations of fans in the audience. 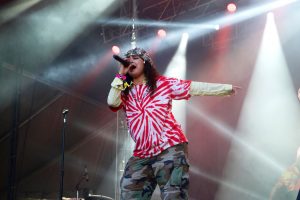 Remi Wolf and her funky tie dye-clad band were excited to be back in their stomping grounds of the Bay Area. Wolf kicked her shoes off the stage at the beginning of the set, finishing the rest of the show barefoot, and continued to toss off more layers. She filled her energetic, upbeat songs such as “Monte Carlo” and “Photo ID” with witty flair, wedged in between the pains of youth that most can relate to. Wolf also performed “Liquor Store” and “Sexy Villain” from her new album, Juno, released earlier this month.

The funk continued with Moses Sumney’s set. “Can we get sexy? Is that all right?” He asked the crowd. The neo-soul singer brought passion to the stage, dancing with amusement and delivering melodies into his flower-covered mic stand. Sumney teased “This is better than Coachella,” performing with a full band featuring strings and percussion. 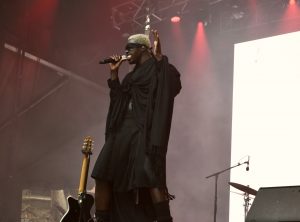 Khruangbin lit up the stage with their trance-inducing songs, including “August 10” and “Time (You And I),” before performing a medley featuring instrumental covers of AC/DC, MF DOOM and Elton John.

Alternative-pop band Glass Animals performed on a pool-inspired stage setup, complete with basketball hoops and a pineapple, which singer Dave Bayley handed to a fan in a pineapple costume. The group played through track “Gooey,” while Miami rapper Denzel Curry surprised the set for his verse on “Tokyo Drifting.” Glass Animals concluded with TikTok darling “Heat Waves” to the crowd’s amusement. 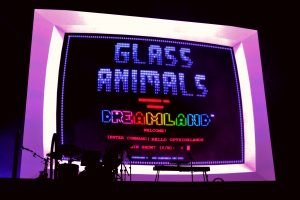 Saturday’s artists got a headstart on the Halloween festivities. Indie-folk singer Angel Olsen graced her set dressed all in black with a pair of shades, matching her band members. Olsen mentioned how it felt like a spooky time to be performing before playing an All Mirrors-heavy set, beginning with the title track and “Spring.”

Rico Nasty stepped out wildly swinging a mallet in her Harley Quinn-esque clown costume. The crowd extended past the nearby stage as thousands of fans crammed themselves together, jumping up and down with excitement. Her set consisted of rapsy-rocker style tracks and quick-witted rapping on songs such as “OHFR?” and “Pussy Poppin (I Don’t Really Talk Like This.” She also rapped her verse on Doja Cat’s popular song “Tia Tamera.”

Read more: Maggie Lindemann captures the pain of unrequited love in “She Knows It”

Dijon performed intimate music for a large crowd at his set time. The singer-songwriter debuted new tracks “Big Mike’s” and “Rodeo Clown” off his upcoming LP, Absolutely, out Nov. 5. The emotion showed on his face as he enveloped the audience in his words from fan-favorite song, “Many Times.” Dijon’s set demonstrated the range of talent and likely stardom that will find him, regardless of his low-key sensibilities. 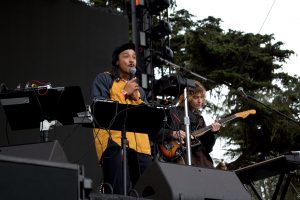 Indie royalty Vampire Weekend took the main stage for their only show of 2021 and their first show in 18 months since the pandemic. A large inflatable globe, taken from their latest LP, Father Of The Bride, filled the stage, with bassist Chris Baio donning face paint in the spirit of the holiday. Singer Ezra Koenig led the band in performing “Sunflower” and “Diane Young” before closing their set with their debut album cut, “Walcott.”

Rapper Young Thug and electronic artist Marc Rebillet canceled their performances due to unforeseen circumstances and injury, respectively. However, Aminé and Reggie Watts of The Late Late Show With James Corden took the stage during their set times.

More photos from Outside Lands 2021 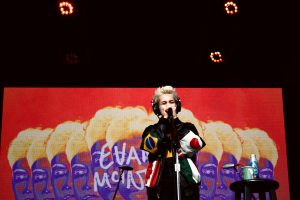 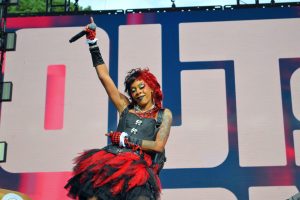 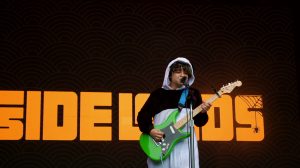 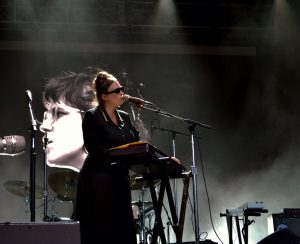 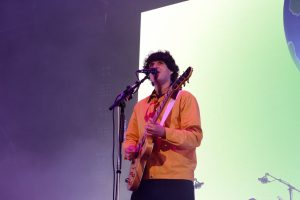