Were you ever so proud of an accomplishment that you wanted to tell the world about it immediately? Emerson Barrett has, and rightfully so. The rhythmic engine room of Palaye Royale is also an exemplary visual artist and storyteller, which will further manifest itself in a “tragic book” graphic novel to be released in tandem with Palaye Royale’s next album sometime at the beginning of the new year.

Barrett can’t tell us the name of the book, as it’s also the title of the impending record. He did let AP in on a few details and how they relate to the album and the recently released videos of “Fucking With My Head” and “Nervous Breakdown.” The drummer says the series will be a three-volume arc with preorders for the first digital installments coming in December and the physical versions in mid-January of 2020. As an exclusive to AP, Barrett sent us the first page of the book, rendered by himself and co-artist XObillie aka E.K Nilsson.

“To give you a little backstory,” Barrett begins, “for the past seven years, the band have been putting symbols and hints and words about this story. In ‘Morning Light’—our first music video ever—you can see Remington [Leith] and myself drawing in a hallway. You see the word ‘Lieseil’ appear for the first time in our Palaye Royale career. So for the past seven years, every piece of art we’ve ever created has [elements of the story] put in it. And it’s only been up till recently that the fans [have] been linking it all together and seeing how crazy we are. We’re chess players, so it’s a very long game.”

Barrett’s story takes place several hundred years ago in a landscape that combines Pirates Of The Caribbean candor with the treachery of 21st century psychological drama. The book is certainly a period piece. But the more terrifying aspects of shadow organizations (the Lieseil Inc. and its similarly covert operatives Warhol Stars) are positively contemporary in their vividness.

“All of this takes place in late 1700s/1800s. The story takes place on an island called Obsidian,” he says. “Obsidian Empire. This is where you meet the characters—the three of us—lost vagabond gypsies traveling in our horse-drawn carriage for the past three years.

“Our characters in the first volume somehow manage to sign a recruitment letter to Lieseil Inc. and Warhol Stars to join their party and be a part of their movement. Our characters somehow manage to receive this letter by accident. Then, we take a very old galleon ship to the island. The island itself was founded by Freemason pirates. There’s all sorts of things—alchemy, Freemasonry, symbolism—beyond that. After these three volumes, I’ll be telling the story of how the island came to be. I’m planning to do it in an anime film, somewhat like Star Wars where the story starts with 4, 5 and 6, and then we go back and tell the story of 1, 2 and 3.”

While Barrett painstakingly renders the architecture of Obsidian Island in the comic, Swedish artist XObillie works alongside him, populating the panels with such background elements as people and nature. Fans will note the detail in the renderings, making for an even more invigorating read.

One hour until the ‘Fucking With My Head’ music video is released. Here is a few teaser scenes from the upcoming Neoutopian Graphic Novel illustrated and written by @EmersonBarrett and @xobillie . We are looking forward to seeing the the royal council present their theories. pic.twitter.com/ZcCx3e4pLY

Cynics can scoff at Barrett’s seemingly highfalutin vision as much as they want; it’s practically mandatory for people who haven’t done anything with their lives to try to tear down someone’s enthusiasm. But Barrett wasn’t playing with you about “the long game.”

You see, this netherworld was created back in Palaye’s formation seven years ago. And it meant so much to Barrett that after his initial run-ins with various record companies dismissing his vision, he decided he wasn’t going to let the concept die by the wayside—or leave it in the hands of some callous suit who would do that for him.

“I really want to make our generation’s Yellow Submarine in my own Victorian way,” he says, referring to the Beatles’ classic 1968 full-length animated film. “The story was written seven years ago by Sebastian [Danzig] and myself when we did our first EP, The Ends Beginning. Previous to that, we wrote this story, and we were going to tell this story in the six songs on the first EP. And we quoted around $500,000 [to do] it. Everyone thought we were crazy, and we didn’t have enough money to do it, obviously.

Read more: Palaye Royale get inside their own heads in new video—watch

“That’s when I stopped looking toward people in the music industry to believe in my project and take it upon myself and implement it as long as I can until we get to the point where we have an incredible fanbase and an organic success. Which has been in the last year or two. Now is the time where I can tell my story. There are thousands and thousands of fans who are receptive to it, willing to decode crazy messages and stuff. I didn’t think anyone would believe in my madness, which led me to believe in my madness, which allowed me to create this story to its fullest degree.”

Going back to the clues, Barrett explains the context of the “Nervous Breakdown” video. In it, the Lieseil and Warhol Stars organizations have set up laboratories and sanitariums to further their patently evil mind control experiments. Seeing the band in various forms of duress (Leith in primal scream mode; Danzig in painful bondage; Barrett looking sleep-deprived for approximately a week) further amplifies the plot line.

“In this story, Lieseil Inc. has this serum or remedy where they capture certain people—not kill them—and do the worst thing, which is to capture their soul and take the individuality from them. Which is worse than dying, I think. The three of us are captured, and they run these tests to take away ourselves. You see Remington’s hair going from blond to black, literally altering him.”

Our heroes escape the clutches of Lieseil and Warhol Stars thanks to a turncoat security operative played by bassist Daniel Curcio. (“We’re in a state of hallucination where we don’t know what is true in life anymore. We are strangers in our own bodies.”) At the end of the video, Curcio drops a gasmask in front of each member, but no one is in a hurry to grab for it. Even Curcio doesn’t carry one, as if he doesn’t need it. Cinematic poignance? Or hidden clue? Or both?

“In this next chapter of Palaye Royale, the gas mask is a symbol,” Barrett reveals. “It symbolizes what it means to be a true individual in this toxic society we exist in. In our world, when you’re wearing a gas mask, you are trying to protect your purity.”

Barrett has been moved by the amount of attention members of the Royal Council have given to the next chapter. He’s willingly feeding their seemingly ravenous need for clues by adding secret messages in binary and Morse code.

“I’ve been having fun with the fans who have picked so much up from this cryptic story. In ‘Nervous Breakdown,’ there’s a binary code at the end that says, ‘Lieseil Inc. and Warhol Stars will burn your beds and leave you with anxiety.’ That’s the name of our next single—not directly, but enough that when the next single is released, [fans will] say, ‘Wow, he told us months ago’ or whatever. I really enjoy giving these fans things to go on.”

These days, musicians seemingly double down on social media in the hope of engaging fans to throw money their way. Palaye Royale are getting their listeners to focus on the intricacies of the universe they’ve created, similar to the futuristic outlaws of My Chemical Romace’s Danger Days or the seemingly post-apocalyptic world of twenty one pilots’ Trench. Don’t ever tell Barrett to “shut up and play the drums.” His ambitions are much wider than most in his position.

“I think that [because] my generation of artists have become so used to companies doing everything, there’s not much creativity within artistry anymore,” Barrett resigns. “I think we’ve taken that upon ourselves to set [our band] apart.”

Check out the exclusive look at the upcoming comic book below. 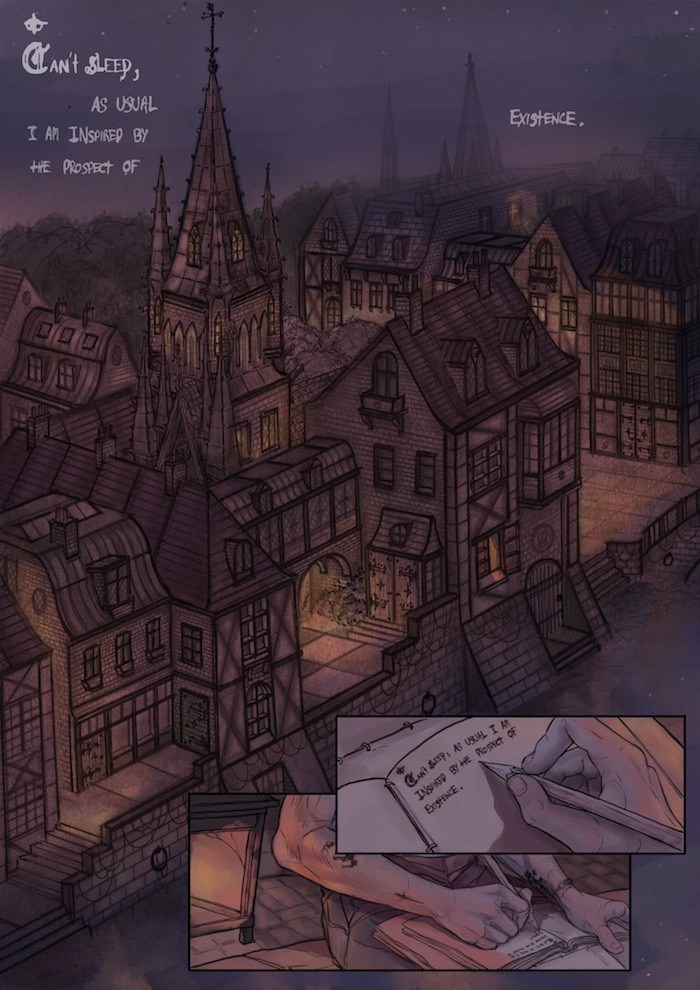