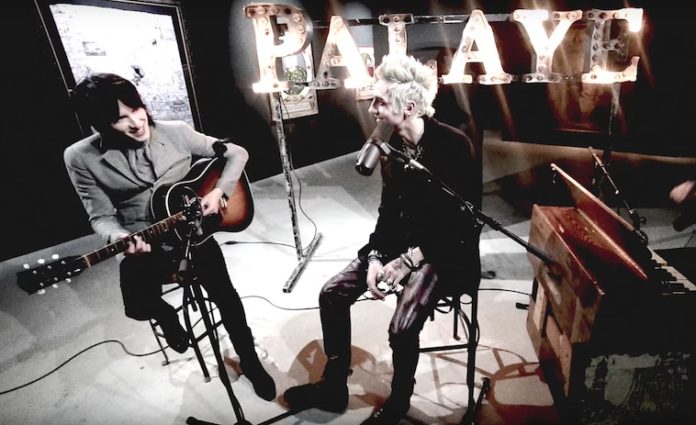 Palaye Royale are all about big, bombastic rock songs, right? Normally, that would be an accurate statement, but as a festive treat to fans, the three-piece have done something a little different, and are premiering a stripped-down acoustic version of “Get Higher” exclusively with AP.

Watch “Get Higher (Acoustic Version)” below:

“We play a VIP acoustic set before our shows, which has got such a different feel to what we normally do, and we wanted people to see that,” explains vocalist Remington Leith of the decision to release an acoustic track. “There aren’t many bands who can do acoustic and full-band [performances] and bring those two different feelings to a song. We definitely wanted to show the softer side of ‘Get Higher.’”

There are no amps or OTT theatrics with this new take on “Get Higher.” Rather, this track and the accompanying video show a new version of Palaye Royale—one that lets the music do the talking.

“We’re doing this to give people a look into how we initially wrote ‘Get Higher,’” Leith says. “Live, it’s got such an amped-up feeling, but we actually wrote the song using just an acoustic guitar, so we wanted to give people an idea of what the roots of the song were. There are some songs that are very difficult to do acoustically: We’ve done ‘Mr. Doctor Man’ acoustic a couple of times, and it doesn’t sound completely right because that song is very much meant to be [played by a] full band. But where you can, I think it’s important to show people that side to your music.”

The origins of “Get Higher” lie in Palaye Royale’s early days, before they found themselves under the spotlight of the alternative scene. In light of the growth of the band during the years between the song’s original release and this new acoustic version, it turns out “Get Higher” has somewhat changed in its meaning to Leith.

“When we first wrote the song, we wrote it because we were all teenagers going through a period in our lives where we had so much angst in us,” Leith recalls. “We were like, ‘We’ll just do whatever we want!’ It’s a rebellious song, and it’s about not listening to authority. But it also means more than that to me now: It’s about following what you believe and not listening to people who haven’t been there for you and don’t have your best intentions.”

Leith describes the release of “Get Higher” 2.0 as “a little holiday treat for the fans,” and contained within the new acoustic video are a couple of surprises for those diehard Soldiers of the Royal Council, the band’s fanbase, to whom the song is dedicated. As well as a nod to the original “Get Higher” video via the inclusion of the light-up “Palaye” sign, this new clip—set in an art gallery—features some original artwork by Leith and drummer Emerson Barrett.

“It was funny, because we were at this art gallery Emerson had put on, and we were drinking there with him after the exhibition,” Leith recalls. “We had an acoustic guitar with us, so we were drinking and playing, and I was like, ‘The acoustics are freaking insane in here!’ We were allowed to use the space after everyone who was there for the art show had gone, so we set up the video a couple of days after that. Those pictures you see in front of Emerson are his art pieces, and they’re really cool. He had one piece on display in the gallery, and I thought that was really great because I’m not much of an artist. If you look around the walls in the video, you’ll see a bunch of Emerson’s pieces, and one of mine, too.”

This release of “Get Higher” sees Palaye Royale’s year draw to a close, but the wait for new music is going to be pretty brief. Leith reveals this new track is just the first step on the hectic journey that will be the band’s next 12 months.

“We’re working on something special right now which I’m really excited about—that should be out in the new year,” Leith says. “In January, we’re going to be recording the new album, and then we hit the road in February. Fans can expect a lot of singles to come out over the next month or two, and then the full record should follow soon after!”

If the strength of the new “Get Higher” is anything to go by, 2018 is going to be a pretty stellar year in the Palaye Royale camp. Get excited.