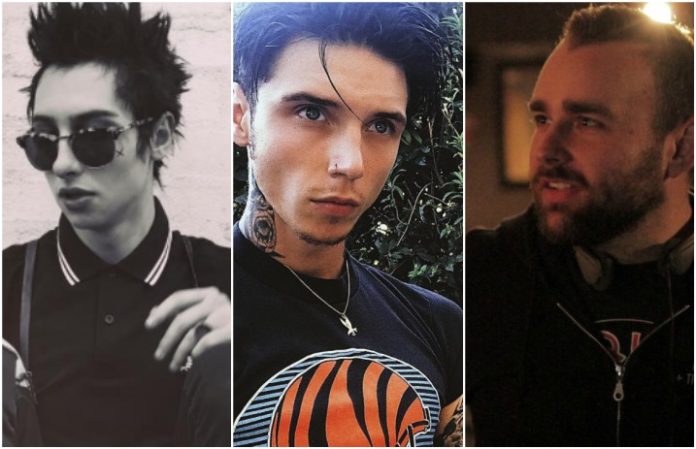 In under two weeks’ time, Ash Avildsen’s music industry drama-come-supernatural epic American Satan will be in theatres. Featuring original music by fictional band the Relentless and starring Andy Biersack, it’s one of the most exciting ventures our scene has witnessed in years. AP recently spoke to Avildsen and Palaye Royale’s Remington Leith — the voice behind Biersack’s character — to discuss the latter’s role in the movie, the music of the Relentless and the franchise’s future plans…

“Not many people get to say that they’ve had Andy Biersack lip-synced to them, so when I was asked I said, ‘Hell, yeah — I’ll be a part of it!’”

When it became clear that the Black Veil Brides frontman wasn’t going to be singing in American Satan, Leith was writer/director/Sumerian overlord Ash Avildsen’s No. 1 choice to take the task on.

“His voice fits Johnny Faust really well,” Avildsen explains. “Remington sounds like a tortured soul. His vocals are a mixture of aggression and despair, and it echoes the character and the story perfectly. I was already working with Palaye Royale on their album, and I wanted to use a vocalist that was pretty new to the scene, so that when people see the film and hear the music, they don’t instantly recognize the voice and become distracted by that. Rather than going after a really famous singer, I thought having a kid who’s barely in his 20s and who can sing with that amount of grit was perfect for the character.”

As Avildsen goes on to detail, he sees the absence of Biersack’s vocals as beneficial to the movie overall.

“My first focus was to get Andy attached as an actor, and it’s better that Andy isn’t singing in the film anyway because of the suspension of disbelief for the audience,” Avildsen says. “There are so many kids that are Asking Alexandria, Andy Black and Black Veil Brides fans that are going to watch the movie because they want to see their favorite artists acting. And to see Andy playing a singer in a band, and then also see him singing with a voice they already know, it’d be very hard for them to lose themselves in the character and the story. Once they get into the story, people will see that it makes sense that Andy doesn’t sing and Ben doesn’t play guitar — these songs don’t have Asking Alexandria riffs and the vocals aren’t Andy Biersack-esque. It’s the same thing with Andy performing in the movie onstage — he made it very apparent that he was going to use different mannerisms, idiosyncrasies and stage moves that are things you wouldn’t see in an Andy Black or BVB show. So between having a different voice and a different stage presence, Andy really brings this Johnny Faust character to life, and Remington’s vocal performance is great!”

The recording process was initially a strange one for Leith, but it was a situation he soon embraced.

“It was different, because every time I step into a studio to record, I know I’m eventually going to be singing the music live, and I always look forward to performing the music I write,” the Palaye Royale frontman shares. “Whereas with this, I was singing a song once, knowing I’d probably never be singing the song again. It was a really weird feeling, but it was funny, because my mom actually went to one of the filming days for the movie in LA, and she videoed Andy singing along to my voice! She sent it to me a while ago, and having always looked up to Black Veil Brides when I was a kid, it was such a cool experience to watch Andy perform to my music.”

But Leith’s involvement with American Satan doesn’t just end with him singing Johnny Faust’s parts in the movie. Sumerian will be releasing a full album by the Relentless featuring original songs from the film, as well as covers of artists as diverse as the Moody Blues and Neil Young. Moreover, Avildsen plans to create a whole franchise around American Satan. This movie won’t be the last time we hear from Johnny Faust.

“There’s going to be a TV series that’s a spin-off from the movie, where the Relentless’ story continues, and the other characters from the film will be involved in that, too,” Avildsen reveals. “There’s also going to be a cartoon that we’re working on. I’m trying to create this rock ’n’ roll universe where there are more characters and stories tied together, rather than it being just one stand-alone film and that’s it. There’s a lot more coming next year that’ll all be tied to the Relentless and the characters in American Satan.”