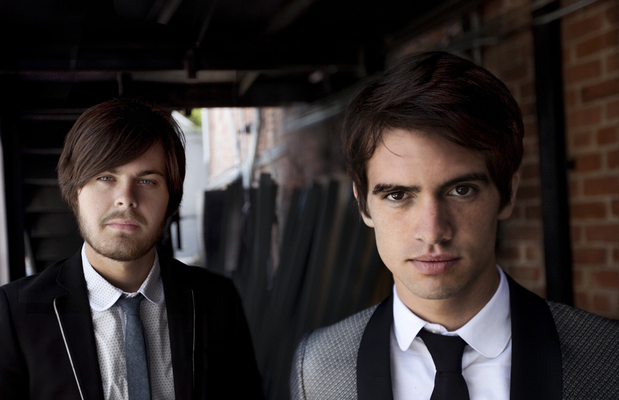 PANIC! AT THE DISCO’s current U.S. tour got off to an auspicious start: Frontman Brendon Urie missed the first show in Salt Lake City because there was a chance he was suffering from malaria. In his place, the band recruited replacement singers, including Neon Trees frontman Tyler Glenn and a local band member named Ashley Houghton. Thankfully, Urie soon was given the all-clear—paving the way for the band’s tour with Patrick Stump and Foxy Shazam to continue on as planned. AP caught up with drummer SPENCER SMITH earlier this week in Sacramento, California, the day after a show in Reno, Nevada. Smith talked about the replacement singers, his current tour mates, new material Panic!’s been writing, what guitarist Ian Crawford and bassist Dallon Weekes bring to the band—and what exactly was up with that picture of Urie wearing a Borat-styled mankini.

So why did you guys think Brendon had malaria?
We started in Indonesia and then we went to Australia for ten days and everybody was fine that whole time. It was actually on the flight back—we were in Hong Kong on a layover, getting ready to fly back to L.A. All of us around the same time started feeling like we were catching a cold or something. We just figured, “Well, obviously, we’ve been doing a lot of traveling [and have been on] a lot of airplanes and stuff.” When we got back, the three of us besides Brendon were jetlagged but not really feeling nearly as bad as he was. He thought he just had a cold, but after the first full day when he was just feeling really bad, he decided to go to the doctor, maybe get some antibiotics or a B12 shot.

When he told them he had been in Indonesia, they said, “Well, we can’t rule [malaria] out, because the symptoms are very similar. So you can’t fly, because if you do fly and the test results come back positive, you’re just going to be in a hospital in Salt Lake City for the next two weeks.” We just had to figure out what we were going to do, and luckily that night of that Salt Lake City show, they were like, “Well, okay, we don’t think it’s malaria—it’s just some kind of weird virus.” They cleared him to get on an airplane.

We learned a lot about malaria in the time leading up to [getting] any sort of results back. It turns out, we thought he would have had the symptoms in Australia, and then I read online the earliest it could come up is eight days after he’s been infected—and sometimes it can take up to four to six weeks, and it’s just in your liver basically growing as a virus. It’s pretty disgusting. [Laughs.]

I love what you guys did with the fans in Salt Lake City, having them audition to sing. How did you convince people you weren’t kidding about letting them get onstage?
That morning, once we found out Brendon for sure wasn’t going to come to the show, I wanted to get [the message] out online as soon as possible he wasn’t going to be there, so people wouldn’t be expecting him. I didn’t want to cancel at the last second. Once we decided to make the most of what we could, that [idea of the fan contest] went up along with the note that Brendon was definitely not going to be at the show. At that point, some of the fans figured, “Hey, whether they’re serious or not, we’ll give it a shot.” We organized this little thing with maybe 10 fans that wanted to give it a shot. We had American Idol-style auditions in our dressing room and we eventually found our winner. She did “I Write Sins [Not Tragedies]” so that was pretty cool.

She was pretty talented! I saw the video on YouTube, and I was impressed.
Obviously, a lot of the fans were very nervous just coming in and doing the audition. If they’re extremely nervous just in front of us, [and] then they get onstage and they’re in front of like 4,000 people—that’s just so much to put on somebody. Luckily, we found this girl who worked at a local record shop and she’s in a local band in Utah, so she’s been onstage before. She was nervous, but was very cool and very excited about it more than anything. That’s when we knew we had the right person.

Your stuff’s not the easiest to sing, either!
That song starts off with a sample of a cello; we’re not even playing anything, it’s a syncopated thing. You definitely have to have a good sense of rhythm to be able to keep up on vocals. That was another challenge, but yeah, she nailed it.

I like that you guys are asking people to choose what cover songs you do every night. How did you choose each song that you learned for the tour?
We were getting ready for some of the shows and doing the basic rehearsals, and talking about some different covers we’d like to do. The idea came up of having fans vote. Some of the covers we’ve done in the past had been songs we knew going into it were probably going to be songs fans of ours may have never heard before. With a song [we’ve covered] like “The Weight” by the Band—we expose people to some music they may not have heard, and we get a lot of positive response saying, “Hey, I wouldn’t have checked this out normally, thank you,” which is good.

But we knew if we threw songs like that in with songs like [Adele's] “Rolling In The Deep” that’s relative right now, we’d probably be playing the same song every night. We wanted to play 4 or 5 songs that were relatively new and popular in the past couple years, so we had a good shot of playing something different. We’ll see how that works out.

I saw you guys years ago and you covered Radiohead and Smashing Pumpkins, and everyone in the crowd was befuddled. It is funny, what’s really familiar to one person is a mystery to someone else.
It’s an interesting thing, and a lot of it is an age difference or a generation difference. We have songs we grew up on from our parents playing us. It’s cool to be able to do our own take on it, but then also expose people to the original. We get tired of playing our own songs, so it turns out there’s all these other bands who have written a lot of songs that are quite better than ours are. [Laughs.]

You guys and Patrick Stump go way back. What’s really stood out to you about him now as a performer, as you’re seeing him do his solo stuff?
It’s really exciting, because when we were on tour with Fall Out Boy for two or three tours, he was always writing, and a lot of times it was Fall Out Boy stuff. But when we’d just be talking backstage and talking about music we like and music we were influenced by, he would always have influences that didn’t necessarily instantly translate into what you’d hear on a Fall Out Boy record. We always knew—and grew more aware—he had this whole love of this style of music that if he had the opportunity to do something, he would be able to really do something special. That was what was really cool abut his solo record. It made sense for us—and now seeing him onstage, he has this whole new persona and this whole new confidence almost being up there as himself. His band’s also amazing, too.

In a sense, Fall Out boy were kind of mentors for you guys, and now you’re almost peers with them.
We sort of still look to those guys as a little bit more of that, like, “You guys have been doing things a little bit longer than we have,” and still sort of look to Pete [Wentz] for some advice. But it has changed over the past few years. Now, touring together is less like a big-brother, little-brother thing.