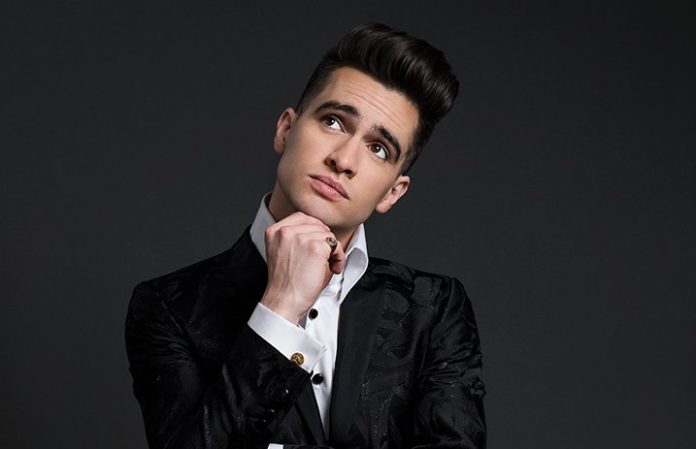 There are no guarantees in the music industry, but the closest assumption we can make is this: If you hope to become a career-lifer, you have to be willing to evolve. No one wants to hear the same record twice and no artist wants to live in a place of redundancy. In pop-punk/emo world, no one knows that better than Panic! At the Disco’s Brendon Urie. It’s been 11 years since “I Write Sins Not Tragedies” entered our hearts and earned the band Video Of The Year at the MTV Video Music Awards, and somehow Urie has managed to keep up the momentum: In 2016 he released Death Of A Bachelor, the band’s first-ever No. 1 album, and this year he earned his first Grammy nomination. (For those keeping score, Panic were nominated in the Best Boxed/Special Limited Edition category in 2008 for A fever You Can't Sweat Out, but this was their first music-related nomination.) There’s no trick to the trade, but the man knows the value of progression, both in his artistry and more recently, in his personal politics.

“In a world unkind to marginalized voices, Urie has been using his own experiences and privileges to benefit others, and that, too, deserves championing: Brendon has become the scene’s surprising woke hero, and we’re better because of it.”

In Trump’s America it only makes sense that artists in the scene would feel more of an incentive to right wrongs that surround them, but research shows Urie has been doing it for a while now. In a world unkind to marginalized voices, Urie has been using his own experiences and privileges to benefit others, and that, too, deserves championing: Brendon has become the scene’s surprising woke hero, and we’re better because of it.

There are many examples of Urie’s forward-thinking leftism, but it’s his recent actions that speak volumes. In July of 2014, Panic! At The Disco played a show in Kansas City, Missouri, a solid year after he revealed himself to be “straight,” but has “experimented in other realms of homosexuality and bisexuality.” The Westboro Baptist Church caught wind of Urie’s openness and recorded a homophobic cover of “I Write Sins Not Tragedies” titled “You Love Sin What A Tragedy,” then protested the Kansas City gig with “God Hates Fags” signs. In viewing the hate speech surrounding their concert, Urie and crew turned the gig into a benefit for the Human Rights Campaign. In many ways, they opted for peaceful protest while supporting a cause meaningful to them.

For the rest of the year, conversation surrounding Urie’s sexuality came to the forefront. Much of the focus originated from the 2013 Panic track “Girls/Girls/Boys” from the album Too Weird To Live, Too Rare To Die!, a song Urie has mentioned is about being in a relationship with a bisexual woman (and opens itself up to more identities within the spectrum). In an interview with the Huffington Post in September 2014, he made his thoughts clearer: “I feel like [sexual fluidity] should be celebrated. There’s no shame in it. And if I can help shed some light on that fact, then great.”

In 2016, “Girls/Girls/Boys” would make another appearance, this time on a Panic! At The Disco shirt benefitting victims of the June 11 shooting at Orlando LGBT club Pulse, an act of domestic terrorism and hate that left over 50 people dead. The shirt, black with rainbow text depicting the lyric “Girls Love Girls And Boys,” was designed and released within a week of the attack. Urie additionally organized a blood drive at their Miami show a week later.

This year, Urie’s progressive focus has seemed to shift to that of feminism and equality for women and femme-identifying folk: On the red carpet at the 2017 Grammys, Urie exclaimed, “The future is female!” giving his own credence to the Women’s March slogan without expecting anything in return. That is the difference between being an ally and being an opportunist: Urie makes mention and acts directly in support of causes that matter to him on platforms as large as the Grammys for a reason.

A month later, in March 2017, Urie released a shirt benefiting Planned Parenthood, with 100 percent of proceeds going to the organization. He wrote on Twitter, “I stand with Planned Parenthood. We’re doing these shirts to show our love and admiration for a cause that offers help for so many people—over 2.7 million women and men, in fact. I also refuse to succumb to intimidation or threats, it’s really the least we can do. So thank you for your love and support and for taking the time to care.” This year Senate Republicans have focused in on defunding Planned Parenthood, a crucial organization that would falter without government assistance. It’s evident that Urie has been paying attention.

Around the same time, fans launched the Girls/Girls/Boys heart project in which concert attendees cut out colorful hearts and place them in front of their illuminated phones during the song in the live arena—turning the voluminous space into a bright rainbow. It, of course, was a fan endeavor, but Urie has immediately shown support for it—he takes the time to address the project each night, thanking his audience for their progressive and inclusive ideologies.

There is a famous Desmond Tutu quote that seems to make the rounds on social media when a gross inequity or repression has come to light: “If you are neutral in situations of injustice, you have chosen the side of the oppressor.” Most of the woke moves Brendon Urie has made have been reactionary—to a timely atrocity, to the way people chose to interact with him and his words—but they’ve never felt forced. He’s not looking for a back pat, he’s attempting to progress as a person, in society, the same way he’s managed to evolve his music—he gets better with age. All we can do is hear his message and behave similarly, using whatever resources come easiest to us. We might not have a microphone, but everyone has a platform. Brendon would like us to start using it.