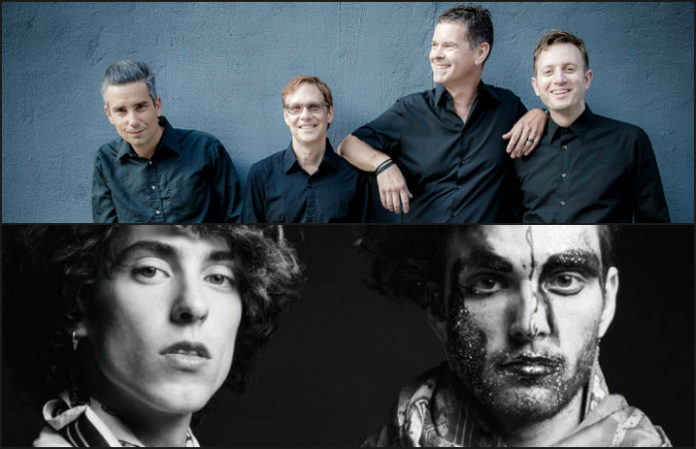 For 25 years now, San Francisco’s Pansy Division have been kicking down musical walls with a message of radical “out”-ness couched in undeniable (and undeniably catchy) songs—hyper-poppy punk rave-ups with titles like “Fem In A Black Leather Jacket,” “Dick Of Death” and “I’m Gonna Be A Slut.” Tours with bands like one-time labelmates Green Day (at the height of that act’s first wave of mega-popularity) shoved Pansy Division’s humor-inflected and intentionally provocative queerness in the face of Alternative Nation’s teeming masses, establishing them as a mainstay of the queercore scene. Now, as Pansy Division prepare to release their ninth full-length, Quite Contrary, (which you can stream in advance of its Sept. 9 release below) AP got band frontman/visionary Jon Ginoli on the phone with Ben Hopkins and Liv Bruce of rapidly rising Brooklyn-based normative-gender demolitionists, sonic rabble-rousers and PD spiritual successors PWR BTTM to talk about queerness and punk, past and present.

BEN HOPKINS: It’s fair to say that Pansy Division were role models of how to “do it yourself,” especially as a queer artist in an art form that, let’s just say, was atypical for people like us to be front-and-center in for a very long time. Liv and I can name 50 queer bands now that are doing exactly what we’re doing on the same level we’re doing it at. Before that, it was just you.

JON GINOLI: It’s been 25 years now! That’s why we decided to do a record this year. There were a few others, but it’s kind of amazing how few there were when we began. One of the things that precipitated [forming Pansy Division] was when N.W.A. came along. I thought wow, here is the voice of people you don’t usually hear on records. That’s cool—but they’re homophobic. You can talk about being violent, you can talk about committing crimes, but you can’t talk about love and you can’t talk about sex in the way that we wanted to. We thought there was something wrong with that.

HOPKINS: I want to talk for a second about the radicalism of talking about sex in a band in the time period you started, especially about gay sex, because such a huge part of the beginning of the AIDS crisis was the reluctance of conservative political figures to even say that it was happening. I always have to remind myself that it was possible, before the internet, for a president to just pretend this problem didn’t exist.

GINOLI: I didn’t think I was going to be the one to do it. Chris [Freeman, bassist] and I were waiting for a “gay band” to come along. When we were starting, what gay people were supposed to do within gay culture was very proscribed. You were allowed to be interested in certain kinds of music if you were gay, otherwise, it was irrelevant to the gay experience. And I thought, “Well that is bullshit!” I thought [it was] a real limitation I wanted to change. And I’m really glad we were able to do that until other people said, “Yes, you don’t have to listen to show tunes and disco.”

HOPKINS: One thing I was happy with when Liv suggested the name PWR BTTM to me was that no one can be like “Oh, they’re just kidding around.” This is PWR BTTM, honey! We put it on a fucking tote bag! With Pansy Division, it’s the same shit. What did people say about your band name when you came out?

GINOLI: Actually, people loved the band name! I thought, if I’m going to try and form this band, I better have my concept clear. The goal was to have an all-gay band. Because it’s not like there weren’t gay people playing music when I started the band, but few of them were out. At this point, we have someone straight playing in the band—three gay boys and one straight dude. When we started out though, we wanted to be an all-gay band to make a statement. I felt like it was necessary when we began. I wanted to make that point with our band.

LIV BRUCE: Have you ever had experiences where people thought you were straight guys playing at this gay thing as a joke?

GINOLI: Yeah, that happened, especially when we were touring with Green Day [in 1994]. Back then, their crowd was very young, and sometimes we would meet people who were teenagers, sometimes even younger than teenagers, who thought “Yeah, your band is funny, but you’re not really gay, are you?” They had us on tour to make a statement to their audience that they were not Guns ‘N’ Roses. They wanted to show their punk roots. What does punk mean to you guys?

BRUCE: It’s such a stupid word. I just think there’s been so many kinds of punk and so many locations of punk, it means so many different things to different people. When I think about keeping punk an open place for outsiders, it always has been this cool kids club, of who is punk and who’s not. I’m starting to think that it’s unavoidable.

GINOLI: I think this is our least punk-sounding record. The idea was, “Let’s make a record that’s true to our age.” We’re all in our 40s or 50s. We did do “I’m Gonna Be A Slut” way back when. That was one of our more popular songs. But none of us wants to be a slut at this point! The album’s called Quite Contrary. We came up with the title after much deliberation because we felt like we just don’t fit into any easy category. We’re punk, but we’re not punk. We’re gay but we don’t play the kind of music that most gay people listen to. We’re an indie-rock band, but we’re queer, and that makes us different, too. I think our band would be more popular if we could easily slot into something. But we combine from these different areas, and I think your band does, too. It’s really great to see you catching on.

AP: Okay everyone, this seems like a good place to wrap this up.

GINOLI: But we’ve barely scratched the surface! We’ve got to go for two more hours!