If 2020 hadn’t already aged you enough, here’s another shock to the system: Papa Roach’s classic “Last Resort” is 20 years old. Marking the whopping milestone for a song that introduced a generation to a new form of expression, Papa Roach have pursued re-recordings and remixes of the scream-along number, the first of which came up by a chance discovery on TikTok. Rising star Jeris Johnson, whose 1 million social media followers tune into his fresh remixes of iconic rock tracks, put his own spin on “Last Resort” and caught the band’s attention.

Fresh from his collaboration with Nickelback’s Chad Kroeger to remix “damn!”, Johnson met Papa Roach’s Jacoby Shaddix in the studio to work their magic on an unforgettable tune that has bluntly refused to age. While shooting the music video for the song’s full remix, Alternative Press caught up with both metal masterminds on bridging the gap between two generations of rock stars, conjuring up a brand-new angle to “Last Resort” and where 2021 is taking them. Check out the full interview with exclusive photos from the music video set below.

Read more: 20 albums from 1996 that mark some of the best of the decade

Jeris, how would you describe your presence in the rock and metal world?

JERIS JOHNSON: I’m the newcomer here to slay the dragon, baby. I’ve been trying to build a career in music for the past 10 years of my life, so it’s taken a decade to blow up overnight. Now I’m 24 and picked up a million followers on TikTok in two months. It’s something I always visualized in my head, but I didn’t know when it would happen. I don’t even know if I consider myself a rock artist yet. I want them to make a new word for whatever the fuck I am!

How did you cross paths?

JACOBY SHADDIX: Jeris did a snippet of “Last Resort” on his TikTok and said something to the effect of, “Could you imagine if I got [the] real Papa Roach [to] feature on this?” We heard it and let it sit for a minute because we were in the middle of writing a record, and it just kept popping up. I was in a grocery store shopping back home in Sacramento and the guy that was checking us out said, “Dude, I just heard what Jeris Johnson did with ‘Last Resort.’ That thing’s sick as fuck.” People are talking about it! I went back and watched it a few times and realized this kid’s got a fucking vibe and reached out to him to make this shit for real. Two weeks later, we were in the studio.

JOHNSON: For one thing, Jacoby is the most awesome rock star in the entire world. I’ve always been lucky to have mentors along the way. while working with Jacoby, he’s been able to share valuable wisdom with me, and I appreciate it so much. It’s been a dream come true from my perspective.

SHADDIX: I look at Jeris in the hot seat now with people coming at him from every angle. I’ve been in that position before, so I’ve got some wisdom to offer. To have Papa Roach embraced by the youth culture and celebrated in this regard, it’s a great feeling to be 20 years deep into this major-label career and still have music that’s relevant. When you see somebody take a song and reimagine it, sometimes it’s great, and sometimes they shit the bed… fortunately, Jeris did not shit the bed. There’ll be a few haters going, “Boo, what are you doing to the classic?” You’ve still got the original. you can go back and listen to it, but this is 20 years later celebrating it with some new blood.

You’ve switched up the entire vibe of that careless suicidal classic into a positive story. How did you manage to flip the iconic track’s meaning?

JOHNSON: To me, Jacoby’s lyrics have a very poetic way of saying matter-of-fact things. He tells you how it is and really makes you hear it. I love life right now, and I’m thankful to be where I am, but I’ve gone through some really fucked-up shit. I related to “Last Resort” when I was young, and my lyrics now put that all in the past. The first few lines [are] like, “All these years wishing I was dead.” I’ve been there, but I put a spin on it with the cocky rapper shit that’s relevant to my life. That’s where I started, and here’s where I ended up. We should celebrate people climbing the mountain, reaching the top of it and getting better.

What are your plans for 2021? Jeris, what can we expect from your new EP out today?

JOHNSON: The EP’s got a few new songs, plus the “Damn” remix. You’re gonna get more of a taste of who I am as an artist, my sound and the diversity of songs and vibes that I’m doing.

SHADDIX: We spent a bunch of last year working on the new Papa Roach record, so we’re neck-deep in a new album that’s almost finished. We’re looking to release music at the end of summer and release the album later in the year, so if everything goes right, we’ll be crushing arenas in early 2022.

Johnson’s my sword EP is available to stream here. You can check out exclusive photos by Stefanie Moser from the “Last Resort” music video set below. 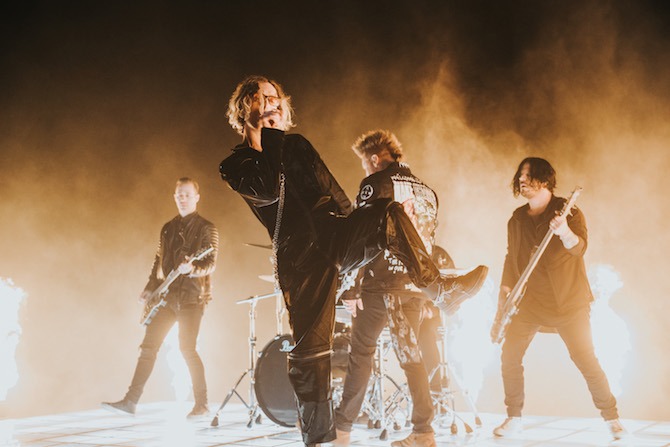