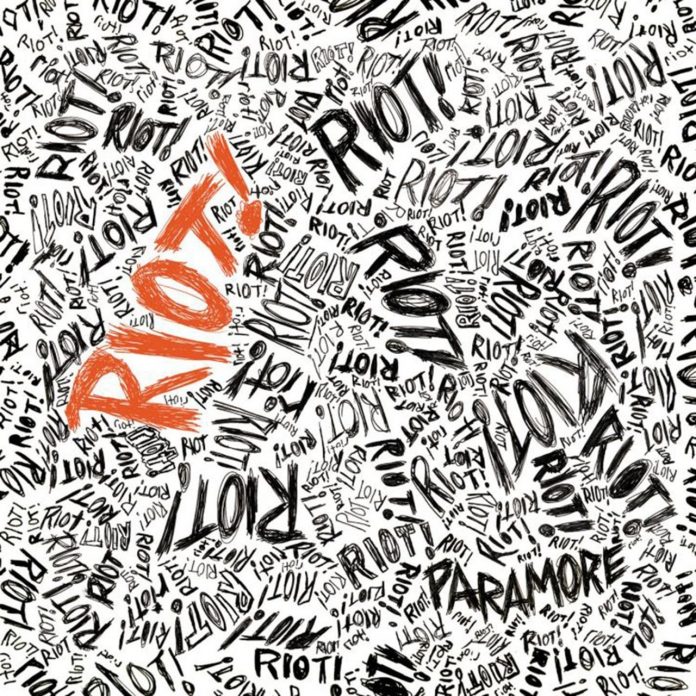 Featured in the August 2007 issue (229), Hayley Williams made her Alternative Press cover debut ahead of Warped Tour 2007 before Paramore appeared on the cover of issue 235 as the Band Of The Year in February 2008. Following the release of their sophomore album in June 2007, ‘Riot!,’ the group were interviewed by Jonah Bayer and shot by Ralf Strathmann for issue 229. To celebrate the 14-year anniversary of ‘Riot!,’ we’ve dug up the full band’s first major feature with Alternative Press. The content has been modified and adjusted to meet the standards of Alternative Press’ digital platform.

Just two years ago, Paramore were playing Warped Tour on a makeshift stage in front of whoever would stop to listen. Now that they’re not only headliners but armed with an exciting new album and the most charismatic frontwoman since Gwen Stefani, there’s no limit to what they can accomplish.

The first thing you notice is the hair. Equal parts magenta, yellow and orange and perfectly stylized, it’s the kind of haircut that’s rebellious without being dangerous and impossible to ignore. It’s also the kind of look that teenage girls will inevitably copy—and, unless they have their own personal stylist, invariably fail to achieve. However, unlike previous tie-wearing teen grrrl icons, once you hear Paramore’s new album, Riot!, you’ll realize the band’s charismatic frontwoman Hayley Williams doesn’t need to rely on an elaborate dye job (or any other gimmicks, for that matter) to further her band’s career. All of which makes it that much harder to believe Paramore’s formation was partially due to the fact that no one would talk to her.

“I tried going to public school at first, but I couldn’t make any friends,” the singer explains via cellphone from a tour stop when asked what things were like when she moved to Franklin, Tennessee, at 12 years old. “It was a terrible experience.” However, when she transferred to a nearby private school and met Zac and Josh Farro (then 10 and 13 years old, respectively), everything changed.

“Zac was always talking about this band he was in with his brother and how they would practice after school every Thursday,” Williams explains, adding that the brothers would show up to school armed with mix CDs featuring surprisingly mature acts (including Failure, Death Cab For Cutie and Sunny Day Real Estate) to pass along to her. Soon enough, Williams—whose only previous musical experience was singing in a funk cover band—was their new frontperson.

Read more: Featherweight pulled from a myriad of genres for their ‘Never Bloom’ EP

Once the group recruited Jeremy Davis, Paramore’s lineup was complete—all they needed was a record deal. Enter Fueled By Ramen’s John Janick. “We played a few songs at an abandoned daycare center next to our practice space for him,” guitarist Josh recalls. “Afterward, John came up to us and told us that he wanted to put out our first record.” That album, 2005’s All We Know Is Falling, was titled after Davis left the band a week before they started recording sessions (he rejoined that fall).

But that setback wasn’t the only roadblock in Paramore’s rise to the top. “I think we were kind of bummed the first day when we saw how big the other stages were and how much louder the PAs were,” Williams says about the band’s experience playing the Shiragirl stage on the 2005 Warped Tour. “But people were still coming to see us.”

Despite the fact the Shiragirl stage’s biggest draw up to that point was an obscure hip-hop artist the stage was named after, people began flocking to see Paramore—who had added second guitarist Hunter Lamb to their ranks—and songs off the band’s debut like “Emergency” became anthems for teenagers all over the country (a quick search of the song on YouTube will bring up dozens of young women singing the song a cappella). But that was then and this is now—and with Riot!, the band haven’t reinvented their sound as much as they’ve transcended it; a fact that’s all the more impressive once you learn the metamorphosis from gawky kids to confident performers isn’t the result of some secret Svengali or media training. It’s simply due to the band finally feeling comfortable in their own skin. However, that confidence was almost shattered when Lamb left right before they were about to record.

Read more: 23 post-hardcore tracks that definitely ruled your iPods in the 2000s

“Hunter is getting married in the fall, and we totally support him, but we were a little bit skeptical about how he would maintain a marriage and stay totally focused on the band,” Josh explains about the 21-year-old guitarist’s decision to leave the band in March, which Paramore fans learned about via a post on the band’s LiveJournal [Lamb did not respond to AP’s interview request]. “Ultimately, he was on one page, and the rest of the band were on another—but we’re still on good terms.”

Do you think it’s purely coincidence that you’ve had two members pull a Houdini right before the band entered the studio?

“Yeah, I guess we have a curse,” Josh answers, only half-kidding.

Luckily, that curse makes for some excellent inspiration. Produced by David Bendeth (Hawthorne Heights, the Red Jumpsuit Apparatus), Riot! is probably the perkiest pop-punk album since the Academy Is… dropped Almost Here in 2005. Unwieldy song title aside, the opener, “For A Pessimist, I’m Pretty Optimistic,” is a flawless anthem featuring syncopated drumming and a chorus so big, it’s hard to believe an iPod can contain it. “Hallelujah” evokes New Found Glory, but with a stronger pop sensibility showing how Williams’ vocal range has grown in the past three years. And the requisite ballad “We Are Broken” is destined to be played at junior proms all over the country. Oh, and then there’s the first single.

Read more: 15 music producers who made major career moves with their early work

“The whole song is a true story. In real life, the situation was a lot darker than it was in the song, but when I wrote it, I made myself come off a lot stronger than I was at the time,” Williams explains about “Misery Business” and its accompanying Means Girls-worthy video, which has the singer standing up to a seemingly perfect teen-queen antagonist who’s terrorizing classmates. “It’s a pretty embarrassing situation, and it took me a long time to feel strong enough to say something about it. But now, three years later, I’m no longer reliving it,” she says, adding that talking about the song makes her want to “crawl into a hole. I might be singing about it all every night, but it’s not like a movie constantly playing in my head anymore.”

Although there’s no reason to doubt Williams’ honesty, it’s easy to chalk incidents like this up to teenage melodrama, a fact that understandably frustrates the band. “Yeah, I never think too much about that kind of stuff because if I did, I think there’d be no point to doing this,” she continues. “I know we are a lot younger than even a lot of our fans, and it’s a constant fight to get people to take us seriously. I grew up with my parents fighting a lot, and the guys in the band grew up with similar situations. Anyone can see what love isn’t, no matter what their age. I think that’s the most important message of that song.”

So, does Williams ever wish she was spending this summer like every other 18-year-old girl, getting ready for college instead of sweating onstage at Warped Tour?

“There are definitely times when I call my friends back home and they’re just hanging out, and I’m like, ‘Man, I wish I could just be going to a movie on a Friday night or hanging out with them at Starbucks,’” she admits. “But at the same time, how many kids are going to shows every Friday night wishing that they could leave the venue in a bus?” she wonders aloud. “I just can’t wait to see what happens next.”