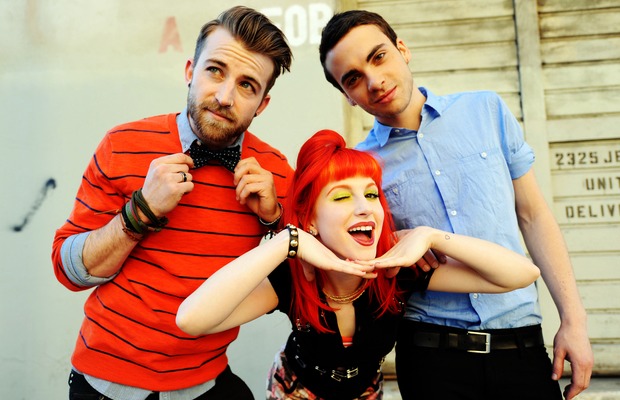 In AP #282, Paramore talked a lot about how they leaned on each other and their fans to get through a tough 2011. In this bonus excerpt, the band expand on this idea by exploring the idea of home, talking about what Warped Tour means to them and reminiscing about their early touring days—and how things have changed. Don’t forget, AP #282—which also happens to be our Most Anticipated Music of 2012 issue—is in stores now! For a list of places where you can find AP, go here!

Being at home hasn’t always been a comfort to Hayley Williams this year. In an entry on Paramore’s band Livejournal, she mentioned off-hand that she’d been staying at her mom’s place quite a bit—even though she owns a house of her own. “It goes back to going through a really difficult time last winter,” Williams says, when asked about it. “The town just got smaller. When you’re living in a small town and some crazy drama happens and everyone wants in on it…”

“Everyone wants to choose a side for themselves and usually it’s not your side they choose,” Williams says with a rueful laugh. “I just started to feel very, like—I don’t know. I didn’t feel at home. I felt very watched and weird. I’ve been staying at my mom’s for a while. I think I’m going to do it again when I get home. Part of it I think is that feeling of comfort, almost being taken care of. Like laziness, really.

“I was listening to Discount, and one of the songs [vocalist Alison Mosshart] goes, [sings] ‘Home isn’t where we should be hiding,’” Williams says. “I was like, ‘Oh my gosh, that’s so me!’ I shouldn’t be trapped in this place, and I did feel like that.”

What brought Williams out of this mindset was not only a renewed sense of confidence—brought on by “not caring as much what people think,” she says—but also the touring Paramore did this year. “It made me feel like [I had] a sense of purpose again—even though we weren’t off tour for very long, it was a tough off-time we went through. [I was] feeling that renewed sense of purpose and feeling hope again.

“It was nice just getting back to our fans. They’re the reason we’re still here, anyways. Being so close with the ones that kind of built us up since we started, those are the people that were in the front row of every Warped tour date. Every single date we played, I saw at least 2 or 3 people in the front row that had been coming to our shows since 2005. And that was huge for me. I could have cried every single day, cause it’s just like, ‘Why are you still here?’” she laughs.

Paramore’s guest appearances on Warped Tour have become somewhat of a tradition, as close as the trek gets to having celebrity cameos. Of course, Warped Tour benefits from their presence, but hanging out at their career’s ground zero is therapeutic for Paramore as well. “Everything felt so supportive and positive on Warped Tour,” Williams says. “I remember the first time we came here; we were playing on the back of a pink truck. I think Warped Tour is such a primitive situation; you’re there and it’s just bare-bones. There’s nothing else to make you better except for your own self. It reminded me of being in the little storage space we used to practice and having my stupid PA that didn’t ever work, and all we wanted to do was be good at what we did, have fun and sneak off to the movies later. That’s what it feels like now to me.”

Still, it’s not quite as easy for Paramore to recapture that simpler time. At the Cleveland Warped Tour stop in July, there was a visibly heightened security presence when the band did a signing at the AP tent. But this doesn’t mean there’s any pop star ego-tripping going on internally; it’s simply a side effect of Paramore having a hectic schedule because they’re one of the most popular bands in the world. “It used to be, like, when you’re in a band, you can stop wherever you want and hang out,” Williams remembers. “Even the first time we were on a bus, one of our good friends was tour-managing us, so we’d just be like, ‘Ronnie, let’s stop and hang out at 7-11.’”

“And that’s true,” York confirms. “Back then, we’d all cram into hotel rooms, so we’d all be together. Now we have our own hotel rooms, which is awesome for us, but you really have to figure out what extension to dial.” [Laughter.]

“You have to make time to be friends rather than just meet up for soundcheck and meet-and-greets,” Williams admits. “It’s like what Taylor said—you’re really spread out now. I don’t mind it; I think that as adults, you need your space.” alt