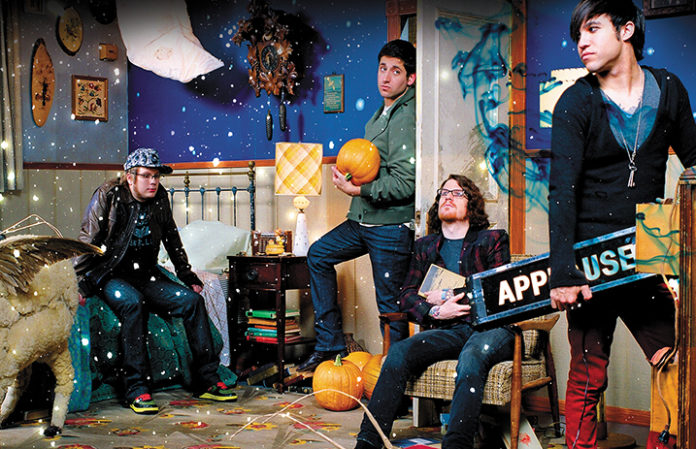 In honor of 10 years of Infinity On High, we sat down with bassist Pete Wentz to talk about the lasting legacy of Fall Out Boy’s third studio album. For the full interview, pick up a copy of our March issue (AP 344), featuring cover stars Hey Violet.

How many songs did you write for the album?
PETE WENTZ: People always ask if there [were]  leftover songs. For the demo phase, we usually do, like, 18 songs. But they're done so early in the process, a lot of those parts end up getting Frankensteined into other songs. We don't usually end up with full drafts of songs. There's not like, a whole other album or anything like that. [Laughs.]

As much as everyone hopes and prays.
Yeah! Like, I get that, I'm totally like, “Where's the outtakes from The Black Album?” I think it's very rare for an album that you'll end up with a song that doesn't make the album that's a gem. Maybe you'll get something from the era that sounds similar, but if it's a gem, it's gonna be on the album, ’cause someone's not gonna let it not be on the album.

Are there any songs that stick with you?
I heard someone do a cover of “The (After) Life Of The Party” online. We used to play that song a lot, and that's one I'd like to play again. At the time, there [was] a big group of us from the suburbs of Chicago that moved to LA, and everything was happening all at once—that song is so much about that. It's a look into that life.

Would you ever do a tour with deep cuts as a setlist?
If we played some smaller shows, that's definitely something we'd do. The danger of doing that—and we've done that a couple times—when you do that in an arena, it doesn't always work, since the majority of people don't know the song. [Laughs.] If we did smaller shows or tours, that'd be a lot of fun to do, though. Or, like, a medley of those songs. You have to serve all of your fanbase. ALT

To read Wentz's full interview on the legacy of 'Infinity On High' pick up a copy of our latest issue below!