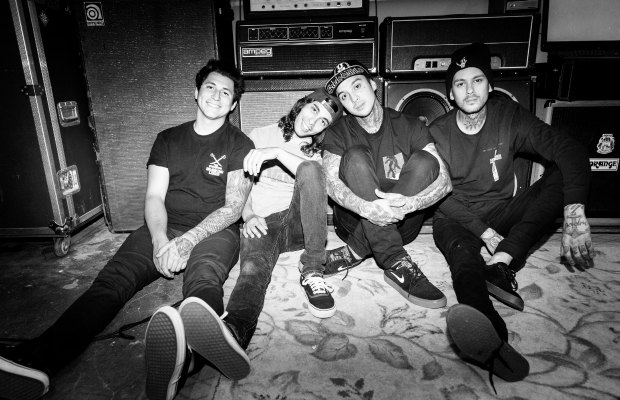 While most of their friends were hanging out on Vans Warped Tour, the boys in Pierce The Veil spent the summer gearing up for album number four. The San Diego quartet returned to Collide With The Sky producer/mixer Dan Korneff (Paramore, My Chemical Romance, Sleeping With Sirens), setting aside three months in his Long Island, New York, studio for an 11-song set expected on Fearless in early 2015. AltPress checked in with frontman Vic Fuentes by phone and got the skinny on co-writing with guys from his favorite bands, noise complaints and remote cemeteries.

How’s it going in there? Are you guys cruising along?
VIC FUENTES: We just finished up all the drums and bass last night, so that's nice. We’ve got a good platform here for the songs, and that makes me happy.

Will the rest of the band stick around after finishing their parts?
Once we've done all the collaborative work, they usually head home. I like to do the last leg of it on my own, because most of it’s just vocals and writing lyrics. I like to have a little more personal freedom to do it on my own time without everyone waiting on me.

How strange was it to be in the studio instead of on Warped Tour?
I love that tour. Every time we have to miss it for whatever reason, it always feels like we’re missing out. It’s pretty much what every kid waits for. I see all of the cool photos; there’s that family vibe. There are bands that complain about doing it, but I have always thought it was super-cool.

Well, a lot of those bands are lazy. And they hate having to do the BBQ.
[Laughs.] Yeah it’s usually the bands that don’t want to put in the work. [whining tone] “It’s so hot!”

Fearless Records owner Bob Becker lent you his cabin during the writing process for Collide With The Sky. What was the writing process like this time? Where’d you go?
We did some of the same stuff as last time, but overall it was more in-depth of a process. We built a new home studio. While that was being built, I rented a house in San Diego and set up a studio in the living room. I did that for a month or so, then rented a cabin in Big Bear [Lake, California] for another couple of months. I got noise complaints so I ended up having to move out from that. [Laughs.] People were just trying to chill out and I was just bumping music at, like, 3 a.m., so, they didn’t like that. But I love going there. I get a lot of work done because there’s nothing to do but eat and write songs.

When the studio was finished in our house and we were able to move back in, that’s when we started doing some actual jamming and some co-writing. Tom Denney [ex-A Day To Remember] flew out, and we wrote a couple of songs. I did some writing with Chad [Gilbert] from New Found Glory.

One of the dream co-writes was with Brad Hargreaves, the drummer from Third Eye Blind. My best friend [pop singer/songwriter] Curtis Peoples and I wrote a song with Brad that made it onto the album. He’s my favorite drummer, besides my brother. He’s so creative. It’s cool to see different perspectives with different writers. It makes for interesting songs.

New Found Glory released three Gold albums in a row from 2000 to 2004. Chad has written, produced and collaborated with A Day To Remember, Fall Out Boy, Set Your Goals…
Working with him was cool. He had theories and methods about writing songs that I had never worked with before. He brought some clarity to me. My thought process tends to be all over the place. He’s good at problem solving. I brought him some ideas and we fixed them up. Plus, we grew up around the same time, so we like the same jokes and know the same movies and stuff.

You’ve worked with Tom Denney before. How has he changed over the years?
He just keeps getting better and better. He’s one of my favorite people to jam with. We love playing guitar together. We’ll just sit down and start making noises. A few hours later, we’ve figured out a song. Usually we do that for a couple of days, then we have a couple of songs.

After all of those writing sessions, how many songs made the record?
We came in with 11 full songs we all felt passed the test of time. Those are the ones that still felt special. We ended up cutting two after we got here, because they didn’t feel right. One of them was a bit too chill. It’s piano based and doesn’t really feel like it fits with the rest of the album. We wrote two more songs in the studio, which is something we’d never done before. It was a challenge. It was crazy to try and make something in here. We just finished the second one yesterday. We just came up with those two songs together, out of nowhere, in the studio.

You’re such a perfectionist. Have you found a way to go easier on yourself?
Um… No, absolutely not. [Laughs.] We’re already a few weeks behind, but that’s just part of our process. We like to use up every bit of time and sanity that we have between us, until the band and producer are going insane by the end of it. We blocked out three months this time instead of a month and a half or two months, but it’s still just as crazy. We work till, like, 4 a.m. every night. The songs are exciting for us, which was the same feeling we had when we made the last record.

Last time, fans found the studio you were in and left you letters and gifts. How about this time?
It’s happened. It’s a little more difficult here because the location is very secluded. I don’t know how anyone would even find it. I’m literally in an industrial park right now as I talk to you, staring at a giant cemetery. There are literally just cemeteries around here. “That’s like all there is [Laughs.]

Yet still, the fans have found you.
Yeah, they still found us. I don’t know how. But I think it’s cool. When we go to lunch or dinner and we see fans, the support we get is really cool. It gets us pumped up all over again.

What’s the living situation like in the studio?
The studio is still under construction. All of the important parts are there, but it’s not pretty. We’re living in this loft upstairs; it kind of looks like a children’s orphanage. But I love it. I’m not a big fan of the super-nice, pristine studios. You feel like you’ll break something if you touch it. I’ve always liked a little bit of the ghetto vibe. It makes me more at ease and therefore more creative.

What are some essentials you take with you to feel at home?
I bring a bottle of scotch. That makes me happy.

How quickly is that bottle of scotch gone?
It goes slowly! [Laughs.] It’s a slow release, for sure. Other than that, I don’t really bring a whole lot. I do bring some of my prized possessions, like my dad’s classic Gibson guitar. I shipped out this old ’70s Leslie amp we’ve never used on a record, I wanted to try that out.

What are some things this new record will have in common with Collide with the Sky?
We’re making another record that will feel good in the live setting. That’s always number one on our list. “Is this song going to be exciting live? Are people going to sing along with it? Will they jump around?” If we don’t get that feeling, we don’t use it. That’s our meter. We’ve got a good mix of heavy stuff and rock stuff, as well. Our band has never been super-heavy or super-light in either direction. We like to have moments of both. Every song on the last record had a different vibe, and so do the songs on this record. It’s been nice to work with the same producer twice, because we've never done that before. It was nice to have that confidence coming in.

How are you approaching these songs lyrically?
I’ll be starting on the lyrics and getting more in-depth this month. I do it the same way every time: I try to speak to our audience as if I'm just talking to them, but I like to give them a visual feel, as well.

When do you expect to have the record out?
I believe it should be out in early January, if all goes as planned.

Not much competition that month generally, so that’s cool.
Yeah, but, we’ll put it out whenever, [Laughs.] I don’t really know about all that “It’s got to come out in this or that quarter.” We’re always hearing about those sorts of things. I’m like, “Hey, when it comes out, it comes out, and our fans will be there. They’ll be ready.”

Yeah, I can’t imagine any fans saying, “Man, this came out in the wrong quarter!”
[Laughs.] “God, a mid-February release? What? Who does that?” ALT