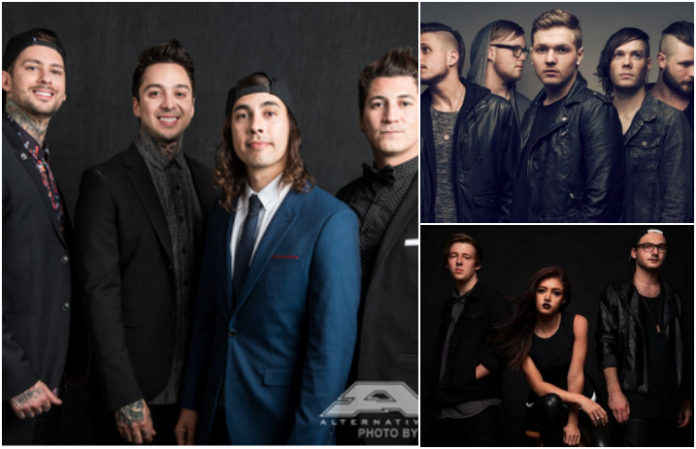 From country singers to a lot of Bon Jovi, we got some pretty interesting answers when we asked around about musicians’ first concerts. Here are the best responses:

Korn, Papa Roach and Powerman 500. The APMAs were the second time I've seen Papa Roach live, which was very nostalgic and I love them.

Bruce Springsteen when I was two years old. Or my first one that I went to without my parents would be Thrice when I was 14. Anyway, my dad's the biggest Bruce Springsteen fan and it totally rubbed off on me, but I think I've seen Bruce maybe 15 times? That's starting from age two, though. I'd like, run up and down the aisles at his concerts with a plastic guitar. There's photos, it's embarrassing.

The first rock concert I ever saw was Linkin Park. I was like, 14. It was awesome.

Keaton Pierce, Too Close To Touch

Warped in 2002. I'm pretty sure I saw Finch, maybe Thrice. That was my first Warped Tour, but it was before I was immersed in [this scene], so I had a friend drag me along. I was way into skate culture and the punk scene and everything, but I ended up walking around all day and didn't like a lot of the bands, but I picked up the compilation and went home.

My dad took me to see the Beach Boys like, 13 times. The first one I saw on my own free will was Green Day, the American Idiot Tour, with Jimmy Eat World.

I was 10 years old and I went to a Bon Jovi concert with my family. It was also the second concert I ever went to when I was 11 years old! I went to the tour the following year, as well. My whole family went through like, a Bon Jovi phase. My mom's always loved them and I've always loved them, but there was this one point where we were like, obsessed. And it was my mom, my aunt, my cousins—we all went together and it was awesome.

I believe it was Alabama, the country band, when I was maybe 10 years old. I grew up on country, so it was big on production. The first show I ever went to was Guttermouth when I was 13. Very different spectrum of music there. [Laughs.]

Justin Nozuka. He's a singer-songwriter dude, really rad. I hadn't been to a real concert until I was like, 17, so it was awesome.

I was five years old, my dad took me to see Peter, Paul And Mary, and it really changed my life. I don't remember anything from when I was five, but that moment specifically, I remember the entire concert—the mics broke and they had to shout the lyrics out and I just really connected with it.

My first concert ever was in San Antonio, Texas, at a venue called The White Rabbit. It was From First To Last and He Is Legend.

Dan Flint, You Me At Six