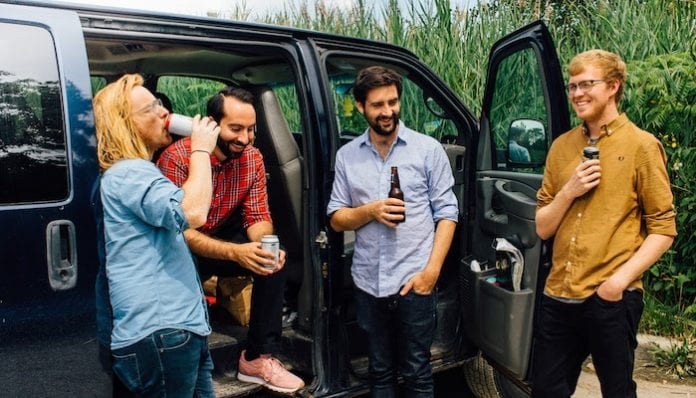 Pkew Pkew Pkew are growing up, though thankfully not too much. The Toronto punks’ debut record was a wild, rollicking 22-minute party fueled by gang vocals and catchy riffs. If 2017’s + One is a wild party, latest release Optimal Lifestyles is waking up late for work the next morning and spending the day trying to discern if you’re still drunk or just not hungover yet.

“The first album was written before we ever really went on tour, before we all quit our jobs, and before we really knew how uphill a battle it was going to be,” lead vocalist Mike Warne says. “Now we know.”

Optimal Lifestyles’ writing was aided by the Hold Steady’s Craig Finn (whose been a fan of the band ever since hearing “Asshole Pandemic”), and his guiding hand is plainly seen in the way the songs undertake more narratives.

“Working with Craig is still something I’m unpacking,” Warne reflects. “Getting to hear his suggestions, what he liked, what he had questions about, it was a lot of fun, in a nerdy songwriter kind of way.”

The new album is more ambitious and evolved in its instrumentation and storytelling. In classic Pkew Pkew Pkew fashion, most of the songs clock in between one-and-a-half to two-and-a-half minutes. However, they spend less time repeatedly shouting the same handful of lyrics and more time experimenting with their sound. They show off guitar licks and take more time to reflect on the lives they’ve been living since + One.

The opener, “Still Hangin’ Out After All These Years,” sounds like a track from + One until you take a closer look. It’s got the same intensity and energy, but for the first time, the band realize that they haven’t grown up. By their own admission, they’re stunted and stuck in their old ways.

“Skate 2” also deals with the realization that constantly partying isn’t a sustainable lifestyle. It’s drearier in its outlook on life, and the credo is no longer “skate or die;” it’s “shred until you’re dead, or until you break your wrist again.” Similar to the first track, they know they have to change, but do nothing to break the cycle: “I guess that it’s over/Unless we do it again.” That lyric about sums up the thematic content of the album.

Musically speaking however, the band are thriving. Solos were rare on previous work, and the songs seemingly moved too quickly to allow any one instrument shine. On Optimal Lifestyles, Pkew Pkew Pkew are using their time to experiment with new things instead of giving us + One 2.

“Still Hangin’ Out After All These Years” rounds out with a guitar solo reminiscent of the ’80s, demonstrating they’re capable of much more than classic punk chords. “Point Break” fits right in with their signature pounding guitar riffs and desperate shouts, but raises the stakes with a triumphant sax solo that would’ve brought a smile to Clarence Clemons’ face. They take even bigger risks on  “Everything’s The Same,” with Warne quietly contemplating an old friend and aging over a somber piano tune.

“Adult Party” shows what Pkew Pkew Pkew think of “real adults,” feeling like a Seinfeld episode with its observational humor and misanthropy. Warne describes that bed everyone throws coats on and later dumps beer onto it in an act of rebellious self-affirmation.

“There are only like three or four things in the world that are serious, and a band aren’t one of them,” he says. “We try really hard because it makes us happy, and we want to do it. If it got too serious, we probably wouldn’t do it anymore. Break down how much we make per hour, and then decide how serious to take it.”

As discontented and exhausted as Pkew Pkew Pkew sound at times, they still remain optimistic. They rail against forces that are beating them down with a cheeky grin. In spite of it all, Warne feels lucky.

“We have the luxury of being able to do something frivolous with our lives,” he says. “Things will always be frustrating, especially in a world where very few people believe they should pay for music, but it is what it is. Things could be a hell of a lot worse.”

Optimal Lifestyles is available now. The band are on the road beginning later this month with tickets and dates available here.