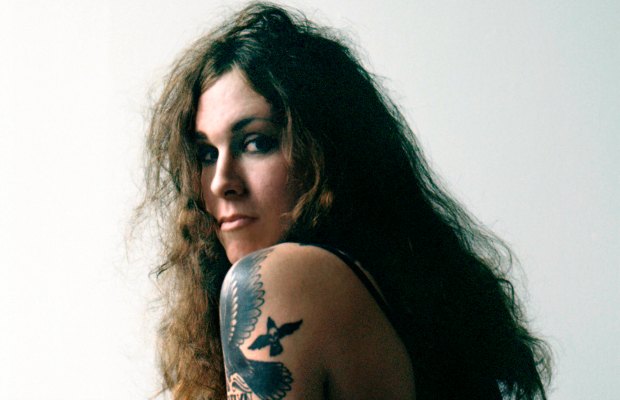 In the “Best And Worst” column in this month’s AP (320), we asked AGAINST ME! founder/vocalist LAURA JANE GRACE what she thought was the worst romantic movie. Boy, did she deliver. Grace lambasted The Lake House, the 2006 “thespian” vehicle starring Sandra Bullock and Keanu Reeves, their first time acting together since the 1994 legendary action thriller Speed. The problem was, we could only spare a couple words to get Grace’s response, but the piece she submitted—rendered in a conversational style that made us laugh out loud—was significantly longer. So in (dis)honor of Valentines Day—and a show of respect to Grace—we’re running the whole piece as she originally sent it to us. You can thank us later. Or send us a love note.

I love movies of all genres. While I prefer ones that are smart, well-acted, visually compelling, and have something to say, sometimes I just want to zone out brain-dead while watching some Hollywood schlock. Rom-coms are usually great for this type of thing.

I've been trying to watch The Lake House starring Keanu Reeves and Sandra Bullock from start to finish for the past 10 years. No joke. Every time I've tried watching it, though, whomever I've been with at the time has refused to finish. Finally, I got through it because I watched it alone. I'll forewarn you, there are some major spoilers coming up here, so if you haven't seen it and don't want to know what happens, stop reading.

The movie starts with Bullock sitting on some stairs talking with her mother when a bus hits and kills a pedestrian. Bullock, who plays a doctor or nurse or something, rushes to help. The pedestrian dies in her arms. This is foreshadowing.

Then, they get into the actual plot of the movie: Keanu's dad was a famous architect who had built this lake house for Keanu's mom. The mom dies before the film starts, and then the dad dies during the film, and Keanu moves into the lake house, which his dad gave to him. He's single and supposed to be living in the year 2004.

In 2006, he has, without explanation, vacated the lake house and Bullock has moved in. She's also single, but she has this shitty on-again/off-again boyfriend. So anyway… the house has a magic mailbox through which Keanu (who is still in 2004) can write letters to Bullock, his tenant (in 2006). Yeah. They're both all like “what the fuck, this is crazy” and keep writing letters back and forth and a romance develops, they fall in love, and then decide to attempt meeting up with each other in “the present” (2006).

They arrange for a date at some shitty fancy restaurant. Keanu makes the reservation two years in advance but then on the day and time they're supposed to meet he doesn't show. She's all like “what the fuck” and breaks up with him through the mailbox, telling him to stop writing. Of course, Keanu doesn't know why he doesn't show up in 2006 and is all like “I'm sorry, let's try again” but she's all, like, “No.”

Let me say that again: They have a fucking magic mailbox that transcends space and time, through which they can communicate, they try for one single date and it doesn't work out and she breaks it off, tells him to stop writing and she goes back to her shitty boyfriend.

Keanu gets all bent out of shape about it. He's heartbroken. He moves out of the lake house (allowing future Bullock to move in, which right there, is a plot hole the size of a Buick, as she couldn't have moved in if he hadn't moved out and the only reason he moved out is because she moved in and started writing him letters, from the future). What an asshole though, right? His dead dad built a house for his dead mom, it has a magic fucking mailbox and this girl he's never met doesn't seem to appreciate it in the slightest bit and that's the girl he wants? Why move out? Screw the space/time continuum; he stays, she never moves in, all memory of her is erased, no heartbreak. The End. It's a great house and he owns it. Now find someone who appreciates the magic fucking mailbox. Or at the very least you could continue to be friendly pen-pals, maybe place some sports bets a lá Back To The Future 2.

Anyways: Keanu's time catches up with Bullock’s (2006) and he's still all hung up on her and then he remembers she said she was gonna be sitting on those steps a couple days before their date, which he still can't figure out why he doesn't make it to (never mind the fact she never stops to think “Who is cashing my rent checks?” Did she not have to sign a lease?). He jumps the gun to go and try and catch her while she's there. Ends up that he's the pedestrian who got hit by the bus and he died in her arms, though she didn't know that (which is the source of many more plot holes I won't even get into) and that's why he doesn't make it to their date. Once she realizes this, she rushes back to the lake house and writes a letter to him in the past, telling him not to go find her at the stairs but to meet her there at the lake house instead—which they should have fucking done in the first place. She puts it in the mailbox, he shows up, still alive, having been saved by the letter. They kiss. Happily ever after, etc. etc.

Never mind the plot holes (so many plot holes). I can get over that. What bugs me is just how desperate they both come across. They don't really love each other—they've never even hung out. She goes running back to the other guy after one single failed date attempt. Can't they both just be okay with themselves alone and not be in a relationship? They don't even have anything in common (well, maybe they both like shitty movies). That isn't romantic; it's pathetic. Come to think of it, while I did laugh often, I'm sure the movie isn’t intentionally a “comedy” at all. They're terrible together and have the onscreen chemistry of a pair of corduroy pants and a cable knit sweater (on a related note, the turtleneck Keanu wears in the movie is a fucking war crime.) I wish Dennis Hopper would have killed the both of them when they were on that bus in LA that couldn't slow down.