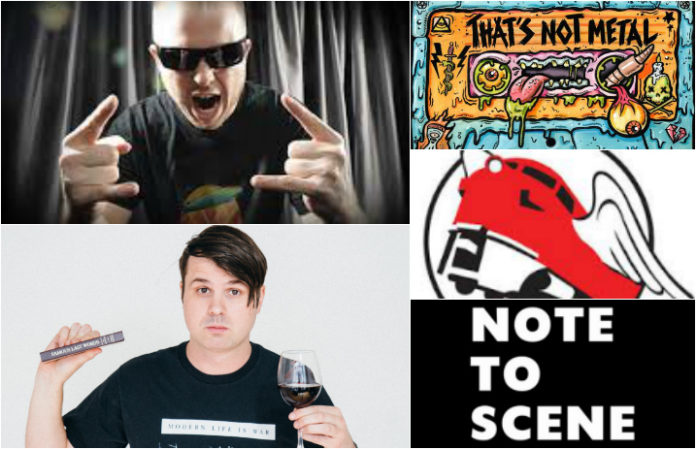 Over a decade ago, the words “iPod” and “broadcast” were blended together and the term “podcast” was born.

In a world where content is king, the competition for our eyes and ears is more intense than it’s ever been. If you have a podcast app on your phone, you can subscribe to as many series as you like. Every episode is automatically downloaded as soon as it becomes available, and most are completely free.

There are tons of awesome podcasts available for your aural pleasure, but here are six of the best music podcasts:

Going Off Track, a joint venture between VH1’s Steven Smith, Jonah Bayer (former AltPress editor), producer Brad Worrell and the Gaslight Anthem drummer Benny Horowitz, is about to celebrate its fifth anniversary. Each host brings a unique perspective to the podcast from the worlds of TV, a print/online publication, the studio and a modern rock band. Every episode is presented by a combination of the hosts and includes appearances from current or former band members, music journalists, Saturday Night Live cast members, filmmakers, actors, animators, a chef, a booker, a clothing label founder…you name it; the only prerequisite is that they have a burning desire to chew the musical fat. The conversation has a loose structure, but its fluidity often encourages it to start “going off track.” Past guests include Nikki Sixx, Sick Of It All and Laura Jane Grace.

Shane Told, frontman of post-hardcore punks Silverstein, smartly came up with the concept of a podcast where he speaks candidly to other lead singers. Told’s intentions are to bring dressing room conversations to the show and share both similar and different experiences on the road, in the studio, at practice and onstage with other like-minded lead singers. His warmth and positivity radiates throughout Lead Singer Syndrome, and his relaxed but steady pace allows him to build a progressive rapport with his interviewees, as they explore musical experiences on common ground. Past guests include Fat Mike, Adam Lazzara and Mike Hranica.

2017’s newest music podcast of note is Note To Scene, the brainchild of Matt Crane (former AltPress.com editor) and Tyler Sharp (former AltPress news writer). After years of working in the music industry alongside many influential artists, the duo bring a unique perspective to discussing and debating all of the biggest happenings in the music scene. The rough format of the show is for the first hour to cover news stories of the week and the second hour to be dedicated to a scene-centric topic. The guys are keen on audience participation and encourage listeners to contact them and bring topical ideas to the table. Expect heavy opinions, brutal honesty and a valuable education from Note To Scene.

Someone Who Isn’t Me

Daniel P. Carter, host of the BBC Radio 1 Rock Show, independently launched the Someone Who Isn’t Me podcast last year, with each episode revolving around one particular artist. This podcast enables Carter to shed the formatting shackles of his radio show and delve far beneath the surface, to discover an artist’s more personal insight into music, art, culture and the esoteric. The familiarity between DPC and many of his interviewees from past encounters is evident, cultivating a safer and more expressive space for thought-provoking and abstract offerings. Guests include Oli Sykes, Corey Taylor and Laura Jane Grace.

London loudmouths Stephen Hill and Terry “Beez” Bezer generate the no-holds-barred That’s Not Metal podcast every Friday. Despite having a wealth of music journalism experience between them (Metal Hammer, Scuzz TV and Kerrang! magazine), the pair are conspicuously fans of alternative music and the scene, first and foremost. Their tongue-in-cheek name derives from a popular saying that came about a few years ago and isn’t to be taken literally. The twosome banter about pretty much every sub-genre and often vehemently agree or starkly clash, which makes for plenty of comedic moments. Now 100 episodes in, the show is even sponsored by Marshall Amps U.K. for added credibility. That’s Not Metal is passionate, honest and piss-your-pants hilarious. Guests include M Shadows, Gavin Rossdale and Davey Havok.

Jamey Jasta, frontman of Hatebreed, is arguably the most charming vocalist in metal. With over 200 episodes of The Jasta Show under his belt, Jasta is a bona fide podcast veteran, dishing out new episodes every Monday and Thursday. The Jasta Show is endorsed by several big name sponsors, one of which is Monster Energy. Jasta’s laid-back demeanor and endearing East Coast candor make him a vibrant and charismatic host. He’s self-assured and has no problem making fun of himself, which he makes clear with a custom-made jingle to spotlight his on-air blunders: “You misspoke on the show, you made a mistake, you fucked up on the show, correct that shit!” Guests include Mike Muir, Andrew W.K. and Brent Hinds.