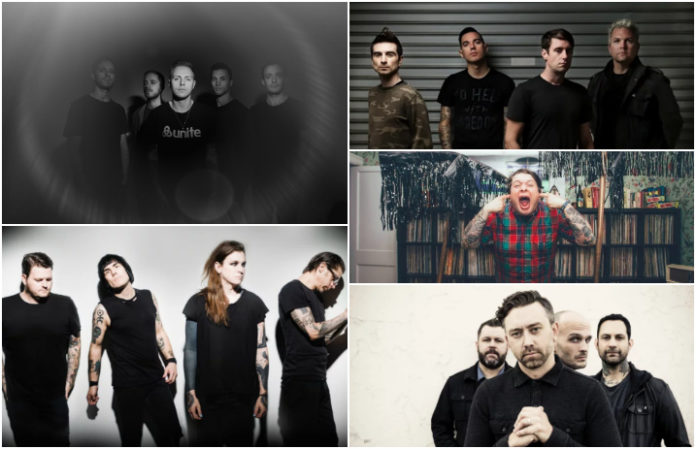 These are troubled times: The Trump presidency, Brexit, terrorism, poverty, LGBTQ+ rights, and gender equality are just some of the political and social issues facing the world today. There are several bands in the alternative scene taking a stand on these problems, and in this list, we present to you 17 bands who have something vitally important to say about the world in 2017.

Adult Mom—the brainchild of vocalist Stephanie Knipe—make a lo-fi, shoegazing brand of indie-rock that sees them dealing with the subject of genderqueerness. It’s tender and, at times, somber stuff, but this is important music that is shining a light on the LGBTQ+ music scene.

Laura Jane Grace is one of the greatest rock stars on the planet and one of the most important voices in punk. Since coming out as transgender in 2012, Grace has fought for the recognition and acceptance of the transgender community, most notably on the band’s stunning 2014 album, Transgender Dysphoria Blues. She’s been knocked down more times than most, but the Against Me! frontwoman comes back stronger every time, and her band is now on course to go down as one of the scene’s most legendary acts.

Be it through their own music or their A-F Records label (more on said label’s alumni shortly), Anti-Flag have always campaigned for a just world via their politically-charged punk rock. Whether they’re engaging in anti-war activism or supporting great causes such as Greenpeace, the Pittsburgh punks are never far from the political issues of the day.

“Sorry son, but we destroyed your home/We murdered your family, now you’re on your own/Collateral damage, face down in the sand/Watch the dominos fall, it’s all just part of the plan.” Ouch—Sam Carter and the rest of Architects certainly aren’t impressed with the state of international affairs if the lyrics to “A Match Made In Heaven” are anything to go by. As well as singing about political issues, the band work alongside charities such as marine conservationists Sea Shepherd to work toward a better world.

Indie-pop duo Diet Cig are taking the fight to the detractors by standing up for the marginalized, and having a bloody good time along the way. Whether singing about social issues—“It’s hard to be a punk while wearing a skirt,” vocalist Alex Luciano sings on “Tummy Ache”—or working on their for-charity brooches and patches, which sport messages such as “Muslim Lives Matter,” the New York duo are always taking positive steps to make the world a more vibrant and accepting place.

Never far from political debate are U.K. electro-punk heroes Enter Shikari, whose records have always had a socially-conscious message. Frontman Rou Reynolds has recently been vocal about issues such as President Trump, Brexit, and the U.K. general election, and it seems that whenever injustice rears its head, you’ll find Enter Shikari taking a stand and sticking it to the wrongdoers.

An act currently on Anti-Flag’s A-F Records roster, solo punk charmer Derek Zanetti—aka the Homeless Gospel Choir—is a man who writes protest songs better than most. 2014’s I Used To Be So Young channelled a sound akin to the likes of Billy Bragg and Frank Turner, and saw Zanetti singing about politics and mental health in a poignant and meaningful manner. He’s also friends with former touring partner Frank Iero (and Iero only hangs out with good eggs, so if you don’t trust us, listen to what the former MCR guitarist says). The Homeless Gospel Choir is rad, and his new song, “Normal,” is incredible.

Byron Bay bruisers In Hearts Wake’s new album Ark deals with a world where water is taken for granted, and their environmentalist message certainly hits home hard thanks to some seriously hefty riffing. “Who’s steering the ship?/We just drift in the eye of the storm,” the band cry on “Passage”—a message to the leaders of the world to get their acts together and properly protect our environment before it’s too late.