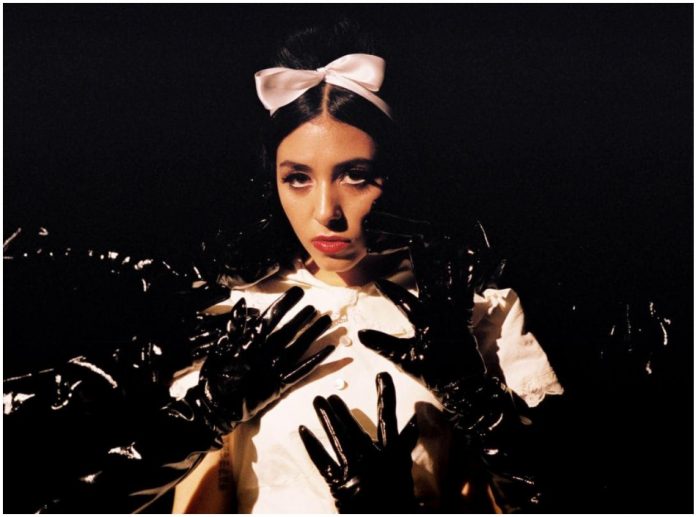 “I think it takes a lot of time to recover from being a young woman,” Mia Berrin of Brooklyn-based punk-rock foursome Pom Pom Squad reflects knowingly. She’s taking our video call from the floor of her new Bushwick apartment, comfortably leaning against a blush velvet sofa that belongs to her partner.

Berrin lights up when she talks about her relationship and how it was the impetus for a recent awakening, giving her space to fully embrace her queerness. “When I fell in love, I suddenly felt like I came into my own body and was experiencing attraction and love—all these things that never clicked in my relationships with men in the past,” she explains. “It suddenly all made sense. This is what being loved is supposed to feel like. This is what self-respect feels like. It felt like I woke up one day and I looked at all the clothes in my closet and I was like, ‘None of these are for me. None of the actions I am taking currently are with consideration for my own wants.’”

Read more: Travie McCoy honors those he lost with “A Spoonful Of Cinnamon”—listen

The band, led by Berrin with Shelby Keller on drums, Mari Alé Figeman on bass and Alex Mercuri on guitar, are set to release an album on that very topic. Their debut, aptly titled Death Of A Cheerleader, homes in on the confusion of first heartbreak and the deep discomfort of self-actualization, all intertwined with something Berrin refers to as “young adult chaos.”

That aforementioned chaos can be felt and heard in tracks such as “Lux” when Berrin screams, “You can take my peace/Leave me rotting like the leaves/But I won’t ever let you say you cared about me!” You can also sense it in the slow-burning ballad “Crying” as she somehow relays a combined sense of sadness, anger and exhaustion over steady percussion.

In the post-grunge guitar pop track “Head Cheerleader,” which features vocals from Tegan Quin of Tegan And Sara, Berrin takes on the radical act of not just falling for someone else but falling in love with who she actually is. Produced by Sarah Tudzin of illuminati hotties with co-production by Berrin herself, the final product is punk prowess delivered with such a staggering amount of vulnerability that its rich retro melodies are a welcome respite from the painfully accurate memory of what it’s like to be a teenage girl.

Read more: push baby wanted to push themselves to the limit of their creativity

Here, Berrin discusses the joy of Black music, being a messy songwriter and honoring the emotions of her adolescent self.

In discussing “Lux,” you mentioned “doing right by” your teenage self. Why do you look back on that time with so much significance?

Being a teenager is [when] you learn your first disappointments. Things happen to kids that are shitty, but I feel like being a teenager is the first time you can put words to it with nuance. It’s just a culmination of so much pressure, being pushed out of the nest and into your first social situations or your first heartbreaks, your first identity crises. I feel like a lot of people freeze at the age where a significant trauma happens, and being a teenager is enough of a trauma for everybody that it’s easy to get stuck on that time in your life.

There’s also this language about being a teenager [that] I really resented and, honestly, still resent now. If you’re saying I’m emotional or I’m upset, they’re like, “Well, you’re a teenager. Of course you’re emotional or you’re upset.” I had a mood disorder, and I didn’t figure that out until last year because everyone told me it was melodrama or angst or me being sensitive or emotional. Being told throughout an entire period of your life, whenever you feel something strongly, that it’s a phase or it’s not real, that’s so fucked. That’s so traumatic.

Speaking of vulnerability, throughout the album and in the track “Crying,” you’re conveying lots of different emotions simultaneously. How did you feel so comfortable sharing all sides of yourself?

Sometimes when you feel trapped, but you don’t know what you’re being trapped by, you just rebel against everything. So, when I was in college, I was in an acting program that was really horrible for my mental health, and I was in social situations that were really horrible for my mental health. I don’t know exactly where it came from, but my persona for a while was “the girl who gets too drunk at the party and spilled her guts out all over the floor.” That’s where I was in my life around the time I started writing songs.

I’m a journaler. I’ve been a journaler and a notebook writer for a long time starting in high school. It was something that really kept me sane. I think I’m more of a private person or have been more of a private person in my life than I even thought I was, so being attuned to those private thoughts, and then being messy, combined in a nice way where it became my songwriting persona.

You’ve mentioned the revelation that a Black queer woman pioneered rock ’n’ roll. How did that realization play into the creation of this album?

For many, many reasons, this past year has been a devastating time to be a person of color, particularly a Black person. I had a lot of kill your idols moments and realized how isolated I felt in this industry, in this genre as an artist, being a person of color in a quote-unquote traditionally white space. I’m a huge music history nerd. Looking back on people like Sister Rosetta Tharpe and Motown and girl groups, young women and girls who pioneered genres that are now looked at as white. It was upsetting, and it was also inspiring in that I wanted to define myself in different terms than other people defined me.

I was listening to a lot of older music around the time I was writing the record and thinking about how evocative those melodies and arrangements are and thinking about Black and brown people as defined by something other than struggle or oppression. Thinking of Motown, this joyful, beautiful, exuberant sound, why isn’t that associated with Black music? Why can’t Black people occupy different boxes? Especially given the history of the music industry and how it’s a systemic issue, the way Black people have been erased from the narrative of the culture we invented. It—I hate the phrase—lit a fire under my ass. I was like, “OK, I need to make something that honors that feeling and honors that drive rather than trying to fit into a box or trying to fit in with a white audience or crowd.”

Let’s talk about this album theme of not needing external approval. How do you get over the need for validation when you’re creating something?

I think, especially for young artists and creators now, there’s this pressure of immediacy. If you make something, you have to post about it or tell somebody, put everything you make or think about out into the world. I think there’s a lot of power in keeping them close to your chest sometimes. Like [with] “Lux,” there’s been many versions of “Lux,” but I held on to that song since high school because I knew it was good, and I knew it wasn’t ready. I used to get very frustrated with myself, so I would need another perspective to tell me things were OK. I honestly think part of beating that habit is working alone or taking the time to be in the absence of anybody else’s opinions.

If your younger self could listen to Death Of A Cheerleader, what do you think she’d think of it?

I think she’d cry. [Because] of journaling as obsessively as I did from a young age, I feel very close to my past self. Teenage me is someone I hold very close and on a very high pedestal. She’d be really proud and confused [Laughs.] if I told her I moved to New York and live in an apartment with my partner who’s not a man and I’m about to put out my debut album on a label. I don’t think she would know what to do with herself. Probably walk around with much more of a “fuck you” energy than I had, knowing that’s her future.