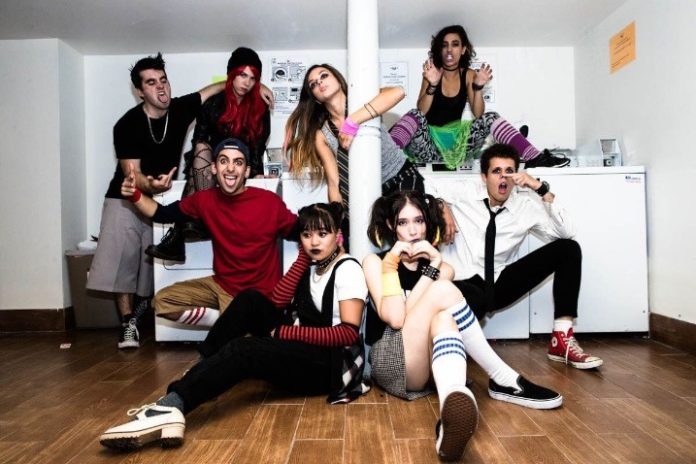 It’s a Thursday night in January as I’m walking with my boyfriend in Manhattan’s Lower East Side to find the Parkside Lounge, a venue hosting the world’s first ever pop-punk musical: Pop Punk High. We trek up and down the same block on Houston Street about three times, confused, as the address we are seeking out seems to be held by a dingy, low-lit dive bar rather than a theater. Skeptical, we walk in and are greeted by a bartender with a gold tooth and a “what the fuck do you want?” attitude. As I look around the room, there is nothing but a few tables, a photo booth and a pool table. The clientele is all significantly older than we are, and don’t seem to have any interest apart from the drink in front of them. There is no stage in sight, and yet I go up to the counter to inquire about seeing a show. Immediately our bartender’s face lights up. “Behind the curtains,” she says as she points toward an indiscreet hole in the wall at the very back of the room. Turns out we are in the right place after all.

READ MORE: The 10 most influential bands of pop punk

As we walk through the curtains, the whole vibe changes. Suddenly we’re in 2005 all over again in a punked-out version of a dinner theater, except instead of food there’s a vast selection of draught  beer. There’s a private bar overlooking a slew of tiny candlelit tables for two leading up to a stage with a set up for a full band. Jimmy Eat World’s “The Middle” is blasting on the speakers and is quickly followed by Sum 41’s “Fat Lip.” The room is filled with millennials in tube socks, skinny ties and a plethora of hairstyles that haven’t been popular since Tony Hawk-inspired video games. It’s easy to tell who the cast is and who the audience is. (We’re the ones gawking at the recreation of our adolescence.) Everyone’s mainly in their mid-twenties, but there’s still a girl barely pushing 21 actively Shazam-ing Panic! At the Disco’s “I Write Sins Not Tragedies” before the show begins.

The lights dim and a girl in a shirt that says “Bite Me” takes center stage. “This is a bar! Get drunk! This a fun show,” she says. “We get drunk, and we love art!” And she’s right; Pop Punk High is arguably one of the most fun shows I have been to in a while.

Deeply nostalgic and original, Pop Punk High is a musical for anyone who grew up during the height of bands like Blink-182 and Fall Out Boy. Set in 2003, the show follows the life of Derek, a teenager who just wants to shred on his board, date the hottest girl in school, win the battle of the bands and escape the overbearing nature of his mom and stepdad, Richard (played by Jacob Grover, who arguably steals the entire show). While opening with songs that start off with lines such as, “My life sucks!” or chanting “I don’t give a fuck!” may sound cliché and overdone, Pop Punk High showcases both the flaws and harsh realities of the pop-punk culture, while also gushing over that musical moment in like a totally gnarly, not lame, love letter, bro. Though incredibly satirical, Pop Punk High toys with both our heartstrings and our adolescent priorities that turned out to be just as lame as we probably were at 16.

The show pokes fun at everything from internet conspiracies surrounding the death of Avril Lavigne (whose ghost/genie is played by Kelly Krauter) to Tom DeLonge actually being abducted by aliens. There are Warped Tour and pizza references everywhere, and even a nice nod to AltPress. On the surface, the show is pop-punk gold, but beneath lies both an incredible critique of the culture as well as a group of kids with a plethora of talent.

Pop Punk High is the creation of  Ben Lapidus, who not only stars as Derek, but also wrote the lyrics and music behind the show. “I always had a knack for writing silly shit,” Lapidus says. “I always loved comedy, and I did theater in high school, but I had no idea that [musical theater] would become the center of my creative work.”

Lapidus has been writing songs for the majority of his life, from high school, to  his time at NYU’s Clive Davis Institute of Recorded Music or in his current band, Kill Your Friends. But while the majority of the 25-year-old’s focus has been on rock and alternative music, he has now slowly ventured almost entirely into musical theater.

Influenced by the likes of Avenue Q, Puffs and a beloved mixture of Blink-182, Saves The Day, Taking Back Sunday and more, Pop Punk High was born out of a love of music and farce. “It started basically with me and Anderson Cook, the book writer. We were friends in college, and he wrote a show…and I acted in it,” Lapidus explains. “From that me and Andy just bonded over pop punk, and we listened to [Sum 41’s] All Killer No Filler one day, and his girlfriend, who is the assistant director of the show [Stephanie Wurster] was like, ‘You guys should just write a pop-punk musical.’ Then that was just the seed that planted it.

“A lot of the show, now, is kind of like a reckoning with pop punk and just high school, which is just like so low key misogynistic that you had to come to that to right the wrongs of pop punk,” Lapidus adds. He is referring to the storyline of the show in which Derek will do anything to win over the girl of his dreams, Amanda Bunkface (played by Melanie Brook), except take into consideration her own hopes and dreams, like winning the battle of the bands for herself. “[In the character Derek] there are just aspects of me that are just elevated to a cartoonish level,” Lapidus continues, who like Derek, also had a band in high school with the more original name of Best Intentions rather than Derek’s Sum 182.

The show mixes comedic social commentary with Broadway not far from the stylings of Book Of Mormon while also upholding the essence of the pop-punk sound in a theatrical setting. “The hardest part is there’s the balance of trying to stay true to a pop-punk form while still trying to get in all of the characterizations that you need in a musical,” Lapidus says. “Just from a songwriting perspective, figuring out how to structure the music so that everything, each song, stand alone, sounds like a pop-punk song and yet in the course of the play, it functions the way songs do in a musical. I mean, that was just a total learning experience for me.”

Pop Punk High began production in the summer of 2016 and has been gracing stages in New York City throughout the last year, undergoing constant rewrites and developments to fit each new venue while getting bigger and better with each performance. Currently located at the Parkside Lounge, the show will continue on through Feb. 22.