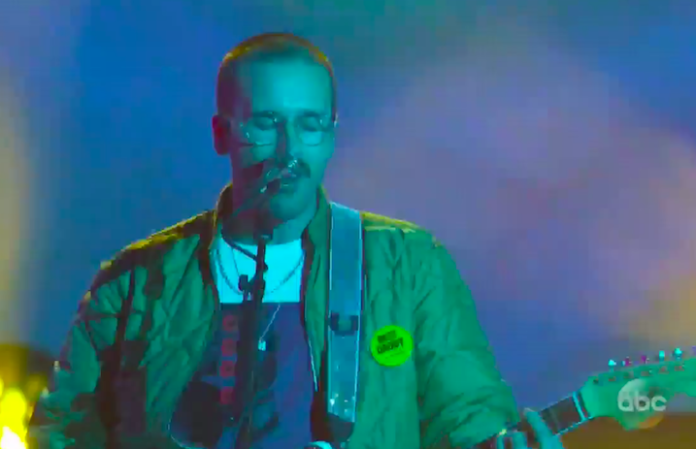 Portland indie-rockers Portugal. The Man’s trolling of the AMAs caused a bit of a stir on social media last night, and not just because people realized it isn’t a woman who sings “Feel It Still,” nor is the band made up of one man…from Portugal. PTM were seemingly calling for a recognition of the benefits of physical, instrument-based performance, as opposed to the backing track-focused nature of what we normally witness at awards shows.

They’ve got a point in that we don’t see many musicians playing instruments in mainstream spheres anymore—certainly not in the sense of a full-band show such as Portugal. The Man presented last night. But an issue with that line of thought is that, even in alternative music, electronic elements are becoming more prominent, as the most recent output from the likes of Fall Out Boy, All Time Low and Paramore attests. Music is heading down a more technologically-driven path, and while there’s nothing wrong with sticking to traditional instruments, we shouldn’t oppose those bands looking to make use of new developments in music technology, either.

However, PTM’s backdrop—and events at the 2017 AMAs more generally—did highlight two things: the need for a greater representation of alternative culture at these large-scale musical gatherings and the importance of live performance.

Starting with the former, the AMAs made little more than a passing attempt to represent alternative music this year, with the performance of John Gourley and co. being the closest the evening came to representing the alternative scene. And yet, despite what little airtime alt music was given, the performance of Portugal. The Man made a real impression, with #PTMxAMAs quickly trending on Twitter and a large number of viewers expressing how impressed and surprised they were by the quality of PTM’s music. The backdrop antics definitely helped, but there’s no denying the band smashed their rendition of “Feel It Still.” Given how well the one moment of alt-rock representation went down with the masses, a little more of it probably wouldn’t go amiss in future years.

The extent to which Portugal. The Man won over the AMAs’ masses with their live show also highlights how important live performances should be to music awards ceremonies. Aesthetics and the broader staging of the act are important—seeing P!nk scale a building was pretty cool—but the music should be at the forefront. When you compare PTM’s set to Selena Gomez’s mimed delivery of “Wolves,” that point is only stressed further.

Alternative rock music is only one part of America’s musical identity, but when so much airtime is devoted to acts that, in some instances, appear to make a mockery of “the live show,” it’s no surprise that an innovative, controversial and guitar-driven performance like the one from Portugal. The Man was so well-received at this year’s AMAs. Hopefully, future ceremonies will learn from last night and give more attention to alternative genres and artists with a desire to prove—live and unrestrained—what good musicians they are.