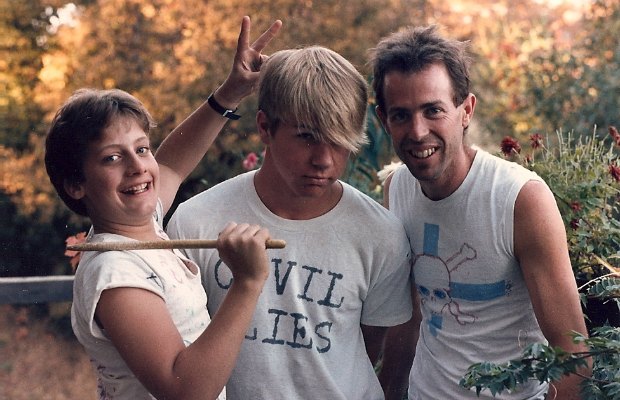 Before there was Green Day, there were the Lookouts!, a quirky punk rock band featuring then-12-year-old drummer Tré  Cool, guitarist/vocalist Larry Livermore (founder of Lookout! Records) and bassist Kain Kong (now a forest ranger) who were truly a product of their environment. The band were from a remote mountain area in California, a seclusion reflected in their sound: sloppy punk rock with a devil-may-care, no-influences-at-all jangle to it. This month, the band (who played together from 1985 to 1990) will have their recorded output reissued via Don Giovanni Records. Green Day fans will have more than just Cool's drumming to drool over: The set features guest vocals and guitars from Billie Joe Armstrong on several tracks, marking the first time he and Cool played music together.

Greg Pratt tracked down Cool and Livermore (who is spending his post-Lookout! Records years writing books and traveling) to get the scoop on the impending double-LP reissue, Spy Rock Road (And Other Stories) [iTunes | Ltd. Edition Green Vinyl]

Why reissue this material now?
LARRY LIVERMORE: Let's put it this way: It's the kind of thing we always wanted to do and nobody expressed a lot of interest before. [Laughs.]  I don't know if we were one of those bands that's ahead of its time or one of those bands that was deservedly not recognized that much. [Laughs.]  But whatever it was, we were not that big of a deal when we were playing. People often said that if we had started a couple years later or hadn't broken up when we did we probably would have got swept along with that whole East Bay, Gilman thing, when all those bands took off in the early-to-mid-'90s, but we were already history by then.

Tré, you were very young when this started and your musical career has gone quite far. How does it feel when you go back and listen to a pre-teen you pounding away at the drums?
TRÉ COOL: It's awesome. We were looking at old pictures of different shows, and it hit me how long ago that all went down. You look at old pictures and there's Billie and there's [Operation Ivy's] Jesse Michaels in the audience, and it's really cool to see how people from our scene have progressed and gone on to do really awesome things.

Part of the legend of the band is that you guys were all from the mountains.
LIVERMORE: We came from an extremely remote area. The nearest homesteads were a mile down the road. As fate would have it, that was Tré's family. I've known him since he was a child. You're talking about an area of several hundred square miles with maybe 50 families. Most of them were feral hippies, ranchers or cowboys. Although there were a lot of people who played music, it would be country and western with a little bit of Grateful Dead or reggae thrown in. Nobody was interested in punk rock.

Larry, how did you get Kain and Tré together?
LIVERMORE: The guy who helped build my house had a 14-year-old named Kain and he expressed interest in playing the bass. I thought for a drummer, all you need is somebody who makes a lot of noise, which shows how little I knew about the sophistication and nuance of music. [Laughs.] I thought immediately of Frank and Linda's kid who lived down the road, because he was a lively, enthusiastic kid, let's put it that way.

They used to have these mountain parties where everybody would gather at one homestead. This one particular party was at his parents' house, and Tré was on the back deck treating it as if it were the stage and MCing a talent show, although he was the only talent. He kept introducing himself as a different act, and if he didn't get much of a response, he'd fall off the deck into the bushes then get up and start over again. He was about 10. I kept that in my mind: “That kid's a showoff. That kid's a loudmouth. I bet he might be a good drummer.” He had taken violin lessons but never touched a drum, but was up for anything that involved making noise; I brought him over and let him try. That was 30 years ago. He was 12 at the time, and he hit the drums in a very rudimentary way, but he kept a beat and right away I said, “Well, this is our band.” And that was the beginning.

What was reaction to the Lookouts! like in the mountains?
LIVERMORE: Most of the mountain people hated our music. It was a heavy pot-growing area. One of our songs was called “My Mom Smokes Pot,” which was not a complimentary song about pot smokers, with swear words as well, so a lot of the local people were offended by the content and doubly offended with the angelic looking little 12-year-old in this band with horrible lyrics. [Laughs.] Tré did look really sweet and innocent. He also had the voice of an angel. I clocked it on a piano once: He had a three-and-a-half octave soprano voice. The one song we used on the record from the 1985 demo—a cover of a Simpletones song called “California”—he sings a lot of harmonies and backups on it.
COOL: We were the only band, really. There was a guy who played jazz, a band that played covers, and actually there were a couple metal bands, but we're talking in the general region. On our mountain, we were it. So we were the most popular and the most unpopular. Most hated. Our first show was at this place called the Czech Lodge, and there were hay bales for people to sit on, and people were having a great time, and then we plugged in and started playing, and people were just running to their cars. I think people tried to unplug us. By the end of our short set, there were maybe five people left there and I think they were all related to us.

Larry, was there ever a sense that after Tré left to join Green Day and they took off, it was like, “Man, that's not us. That's a bummer.”
LIVERMORE: No, not really at all. We were a different kind of band. The first time we played with Green Day was 1988, and it was a show that Tré had set up at a little cabin up in the mountains with no electricity, just a generator. This was maybe their third or fourth show ever; they drove 140 miles to be there and only five kids showed up. So Green Day, then known as Sweet Children, played for five kids sitting on the floor of this candlelit cabin. So that was our experience of Green Day, watching them grow from there. We played with them at Gilman, and our very last show was also with Green Day, in the basement of somebody's house in Oakland in 1990.

When did the Lookouts! break up?
LIVERMORE: We did our last show in the summer of 1990. The record from the last session didn't come out until the following year. We had a little over five years together. And we didn't even officially break up, it's just that Tré started jamming with Green Day in September and played his first show with them in October or November. As soon as I saw him play with Green Day, I thought, “Oh, man. We're not getting him back.”

When was the last time you heard it?
COOL: It's been a few years. I've heard the EPs more recently. I was going through some drums and moving a bunch of stuff around and I found this old drum toolbox with all these drum parts in it and there was a Spy Rock Road tape in there. I was like, “Oh, man, I want to listen to this,” but I couldn't find a tape player. It was so annoying, like, “Man, why couldn't this be vinyl?” If it was vinyl it wouldn't have been in a toolbox, I guess. I heard [the 1987 album] One Planet, One People more recently, and that was awesome.

Do you think the material holds up?
COOL: Yeah. When I heard it, I went in my little home studio and re-recorded a couple of songs just for fun, me playing everything. And they're good songs. They're fast, 30- and 40-second songs. [Laughs.]

So how does it feel for you now that this is being reissued and you kick back and listen to it?
LIVERMORE: I have to say, I'm not in love with every single song. But overall, it's astounding. To me, the most gratifying thing about listening to it now—and it really does affect me emotionally—certain songs really conjure up what it was like up there in the mountains. It takes me back there. It's not necessarily the place I would want to live again, but it was a precious time of our lives. It shaped us to live in that wilderness and to say, “Hey, let's have a band and reach out to the world from here.” I don't think there's another band that could sound like it, and I don't think we could have come from anywhere else except for that region and that culture.

COOL: I think it's good. I kind of forgot half the songs. I was looking at the song list going, “Oh yeah, that song! Oh yeah, that song!” We had a ton of songs, and it's like memory lane, you know, going back and looking at that, listening to my drumming progressing… I was pretty young, so it's fun to listen to now as a man, to hear yourself as an adolescent writing songs and my voice hadn't maybe quite changed yet. [Laughs.] I probably can't hit those notes now.

What do you hope this reissue accomplishes?
COOL: It’s good for people to be able to get it. I hear a lot of people frustrated because they can't find any of the back catalog and people have collections of records and the old Lookout! Records stuff, and the one thing people all have in common is that they're missing at least two Lookouts releases, and they have all the other bands but they can't get the Lookouts! records. We didn't print that many of them. But, yeah, Spy Rock Road is a cool record. There's a lot of history there. I just want it to be out there for people to enjoy and rip up and trash. Enjoy it or hate it—either way, at least it's out there for people to hear it.

Tré, do you ever miss the quaintness of it all? Do you miss playing shows to five people in a solar-powered cabin?
COOL: [Laughs.] To be honest, I haven't thought that much about it.

I guess they both have their charms.
COOL: Yeah. [Laughs.] Hanging out with Joan Jett and Ringo Starr… yeah, I'd probably choose that. alt

You can order Spy Rock Road (And Other Stories) from Don Giovanni Records.