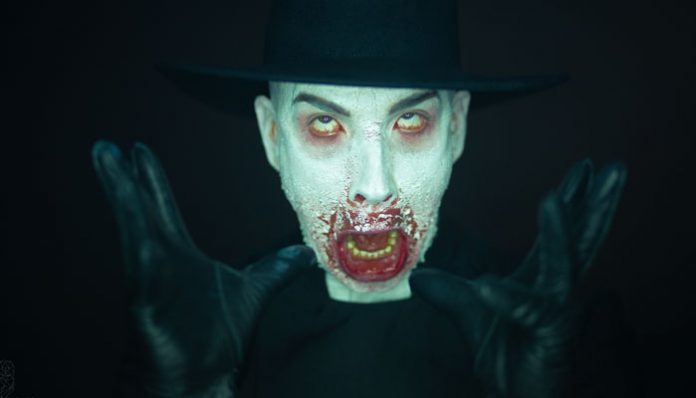 Aesthetic Perfection leader Daniel Graves is on the pulse. He certainly knows what’s happening in various subgenres of electronic music. But equally important is his ability to put his heart into his work without hesitation. That’s why we’re premiering the video for “Supernatural” today on AltPress.

Earlier this year, Aesthetic Perfection were on a European tour supporting Rammstein frontman Till Lindemann. The coronavirus pandemic forced the tour to be cut short, and the band’s last date was March 6 in Kyiv. “We had to leave early because our U.S. tour was supposed to kick off March 13,” Graves says. “The day we landed, March 11, Trump announced the European travel ban, so we turned right around and flew back home [to Austria] immediately. Tour canceled. I don’t recommend two transatlantic flights in a 24-hour period.” (If you missed them, check out the behind-the-scenes video directly below.) He spoke to AltPress about the song, the state of art after the pandemic and his desire to change his whole game significantly.

Tell us your favorite tour story regarding Till Lindemann.

DANIEL GRAVES: Till is quiet, reserved and incredibly polite. I wasn’t sure what I was expecting, but it wasn’t that. When you grow up seeing this enormous persona with an equally enormous and provocative band, perhaps I expected the man to mirror that. I’ll never forget how on the very first day, when LINDEMANN were done with their soundcheck and we were setting up for ours, Till came up onstage and greeted everyone personally, shook our hands and asked if we needed anything, if we had enough room, etc. I’ve been on a lot of tours with a lot of bands who were a lot smaller than LINDEMANN and never received that kind of treatment. It meant a lot to everyone and really set a positive tone for the rest of the tour.

Read more: 10 scary songs that will chill you to your core—and then some

What was the impetus and message behind “Supernatural”? What was the takeaway you wish to convey?

It’s always been my goal as an artist to explore what it is to be human. My way of doing that is using my own experiences to express what I hope are universally relatable concepts. On the surface, “Supernatural” is about my journey out of evangelical Christianity, but I think much more broadly—and importantly—it’s about how we all struggle to find meaning in a seemingly meaningless universe.

What are your next plans? Will you tour like mad next year? Or do you have some tricks up your sleeve to stir the Aesthetic Perfection faithful?

My output during this pandemic has been…prolific. It’s hard to believe I’ve cranked out so much stuff since this all began. Part of it is needing an outlet for all the existential dread, and the other part is that I actually have time. Touring takes up such a huge chunk of my life that I never have the opportunity to just sit and focus on creating, at least for an extended period of time. When I’m not writing, I’m engaging with my most dedicated fans on Patreon and Discord.

Has the pandemic changed our tastes? Do you think we’re going to see more finessed art, thanks to time spent on both introspection and craft? Or are we going to see a doubling-down on mosh soundtracks?

I don’t think we’re going to know the effects of this thing until we’re on the other side of it. My suspicion is that they will be far-reaching and long-lasting. Fingers crossed we don’t all come out of this agoraphobic! I’m cautiously optimistic, though. I think in the end, we’ll all be better for this. And I think art is going to be much more raw and DIY than we’re used to. Necessity is the mother of invention, and when we’re all stuck inside unable to travel and collaborate, we have to get creative with our productions, music videos, streamed performances—everything.

Electronic-based rock music is an evolving realm. What things are you looking forward to, be it your own music or the future routes of other artists in the field?

I think electronic music is, by virtue of its very nature, an art form that has to be constantly evolving. Technology moves so rapidly, it’s important as an electronic artist to be aware of all the new sounds the new tools make possible. As “Supernatural” marks the end of my “industrial-pop” era, I find myself proud of what I’ve already achieved and ready to forge a new path. I’m already well on my way, but I don’t want to ruin the surprise.

Check out the video for “Supernatural” below.