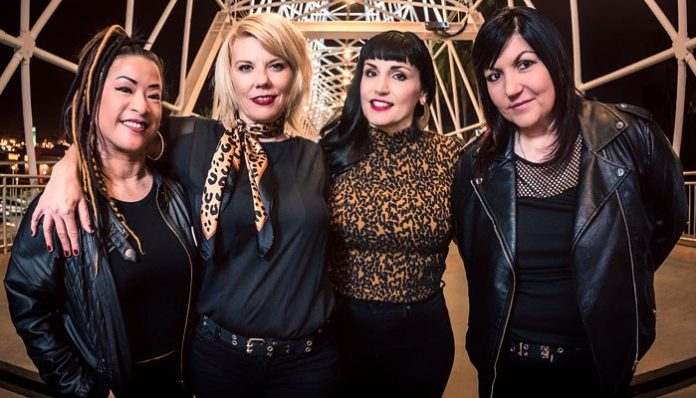 From the stages at Warped Tour to a small club in a shady part of town, Bad Cop/Bad Cop have never had a problem tearing things up. Their melodic, full-throttled punk is as scorching as a stolen, hot-wired car. Their new Fat Wreck album, The Ride, finds them even more spirited and spectacular. You can hear it below before the album’s release date Friday. What’s different? Within those 12 inspired songs lies something most punk bands are severely lacking: humanity.

The band—vocalist/guitarists Jennie Cotterill and Stacey Dee, vocalist/bassist Linh Le and drummer Myra Gallarza—are well aware of punk’s cliches of black cotton mafia boys seeking circle pits. And sure, at the right speed, you can melt the soles of your boots to most of the new album’s 12 songs. Instead of wanting to “smash the state” or “get this fuckin’ pit on,” Bad Cop/Bad Cop want to talk. About solutions. Support. Possibilities. Survival. Community. Listening to the new record makes you feel like everyone can be your ride or die. It’s probably the most optimistic album with guitars you’ll hear this year. Or four years from now.

Cotterill candidly spoke to AltPress about the attitudes that colored this album. In her band’s universe, punk needs more empathy and workable solutions and a fuckton less lip service. On The Ride, Bad Cop/Bad Cop are forever tough and tender. Just not always in that order.

The Ride is the record punk’s been needing for a while now. It’s not all about “go, go, go” and jumping up and down. It’s definitely more optimistic. It feels more thoughtful and mindful while getting out a lot of complex emotions and ideas in songs that are less than three minutes long.

JENNIE COTTERILL: That’s what we were hoping for. We think you learn a lot once you’ve played [a lot] of great songs that you thought were the best things that you could do for a few years. You get a chance to think about what you would do differently the next time. We were really proud of Warriors, but at the same time, that [record] was like a reaction to a lot of things. And I think this album is more like a response than a reaction. I don’t consider myself an angry person. And I think a lot of the music that I was writing at the time was struggling to reconcile that.

It’s like cognitive dissonance, a disconnect between what I am presenting and sharing with people and then what I believe in my heart. I think also seeing where anger and outrage got us keeps you here. It’s just an unhealthy, unproductive state of mind to be in.

The record took a year to make, and the band members had their personal travails, as well.

Stacey had breast cancer, and that is a profound situation to process and come through. She personally has been on a journey of self-betterment and improvement. I went to therapy since the last time we had a record come out. And I learned a lot about [how] to respond to things, what’s productive and owning everything instead of thinking that any problem I have might be the other person. And coming to the realization that empathy, compassion and love are a solid foundation to stand on in any situation. Right now, with what’s happening politically and with people becoming activated, is really cool. I don’t mean to say that there’s not a rightful place for anger in that situation. I think as a white person, I’m not going to take up an angry position, but it’s OK for other people to be angry. I’m outraged, but I’m not here to talk about how angry I am. I want to be here to support and listen and activate from a place of consideration.

The band collectively have done a lot of raging. It’s just interesting to hear Bad Cop/Bad Cop in this context because the passion and the messages delivered are a bit more measured. You didn’t make a record with lyrics from the contents of a Hallmark card store in a strip mall. You can have the humanity in it and still have it be an amazing punk-rock record that you can hum to, jump around and drive fast to. There’s a great degree of empathy for the world.

I had time to reflect on the angrier stuff, which is what we were probably most known for on the last record. It’s just like an escalation of any situation. And I definitely want everything to be de-escalated. But not ignore it. I think in any situation, if you don’t bring anger to a conversation, it’s at least 50% less angry. That’s not to say that another person is so wound up and out of touch with their emotions and rage that it won’t be totally unproductive.

Can one ever be “too punk rock?” Because everything has to be so ramped-up and so intense and urgent all the time?

[Laughs.] I’m so glad that you asked that! Sometimes I am just considering what that term even means. Because I feel like it is a little bit like the meaning of being Christian. I know there are a lot of people that are going to be like, “Fuck off, don’t even compare those things.” But because it’s just changed meanings so many times. There’s one definition where it means you can do anything and there are no rules. An anarchist interpretation, which I subscribe to. But the real meaning of anarchy, not the “I get to do what I want to and not have consequences” interpretation.

Then there’s this other interpretation of punk rock where people think that there are these hard, fast rules and limitations. You know what I mean? Like, you have to be a white guy. You have a black T-shirt on, and the song can’t be longer than two minutes and 35 seconds. Then, it’s four people in the band or maybe three. Five. Not six. And [the song] has to be this many beats per minute. There have been times, days and moments where it’s like, “No, I’m totally not punk rock. I think about what I’m doing, and I do whatever I want with my fucking life.” So I don’t know what to say about it. I just think it’s funny that there are rules that people would make up like that.

Is it hard being in Bad Cop/Bad Cop?

Yeah, but it’s also really rewarding. This record is what I wanted it to be. I oftentimes have very high expectations of things. It’s not like I’m always disappointed. [The Ride] is very much the way that I wanted this to be. And I just am so shocked and in love with the way it actually happened and proud of everybody that worked on it. And grateful for their time and input.

[Regarding] the band: It’s like we got pregnant on a first date. We didn’t really know each other at all when we started. And then we had this chemistry and a reason to see each other all the time and really find out who everybody is. And I have learned so much from every one of these people. We’ve all really grown together as a family. It’s a very healthy relationship. That doesn’t mean that it’s easy and not often challenging or frustrating. But we care about this and each other enough to have conversations that normally I would probably walk away from. “I don’t want to have that awkward conversation. I’m not talking to that person again.” [Laughs.] But you are in a four-person boat. You’re filing taxes together. This is a marriage. So yeah. It’s hard.

And sometimes I have to be really grateful for all of our differences. And then sometimes the differences are what makes it so fucking crazy. So just knowing that balance and duality, you just have to focus on the fact that it’s healthy to agree and disagree, and it’s healthy to have good and bad, and it’s normal. This is my healthiest and longest relationship. These people make me so much cooler than I am. And I’m grateful for that.

Check out The Ride below. And get your very own copy of it here.