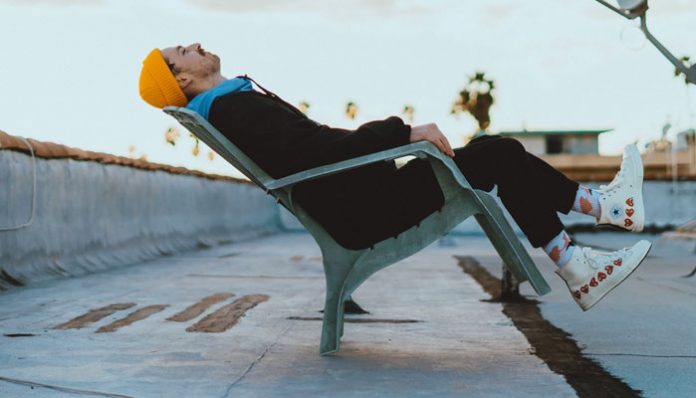 Last year, Thorpe-Evans met Sommer at a writing camp in Nashville, Tennessee. Sommer, known for her performances on tracks by the Chainsmokers and Steve Aoki, had stayed in touch with him. “I thought she was super-talented with an amazing voice,” he says. “I was super-happy to get a chance to collab on something with her. The top-line [vocal] itself was something Heather brought to me originally. It was just her voice and piano on a demo, and I immediately loved the vocal and the story it was telling.

Read more: See how this endearing twenty one pilots “Level Of Concern” clip was shot

“I took the vocal stem from the demo and just began experimenting with new chords and melodies and building production ideas. It happened really fast and organically. Which is always a positive.”

For “Navy Blue,” Thorpe-Evans wanted to balance the emotion of Sommer’s lyrics with a sense of optimism.

“The lyrics of the song are meant to capture the feeling of emptiness you can feel, even when everything around you seems to be perfect,” he continues. “When you work so hard for your goals or a dream and then you achieve it but still feel like you’re missing something. That can be a really difficult thing to process and deal with. It’s something Heather and I have dealt with, and this song was meant to be a way of expressing it. I wanted to try and find a way to balance that emotion with an undertone of positivity. But I wanted to try and make it feel somewhat optimistic and happy in its tone. I do feel like it ended there, which is nice.”

As Prblm Chld, Thorpe-Evans has expanded his skills away from the rough ’n’ tumble pop punk of Neck Deep. His work in the electronic realm has a particular deftness that captivates with its subtlety. Ironic, because he only just started a few years ago.

“I didn’t even discover electronic music until a few years ago, and prior to that, I had never produced at all,” he says. “I was a writer but certainly not a producer. Once I fell down the rabbit hole, though, it wasn’t enough for me to just enjoy the music. I had to learn how to make it. So I just started teaching myself, and now I’m still going. Learning to produce electronic music before any other genre I think has been a great tool. Because I produce other projects of all kinds of genres now. The level of depth and sonic understanding that’s required to do successful electronic production can lean itself to producing pretty much all other genres.”

Thorpe-Evans hopes to have more Prblm Chld tracks out prior to the release of an EP. Check out “Navy Blue” below, and let us know how it makes you feel.