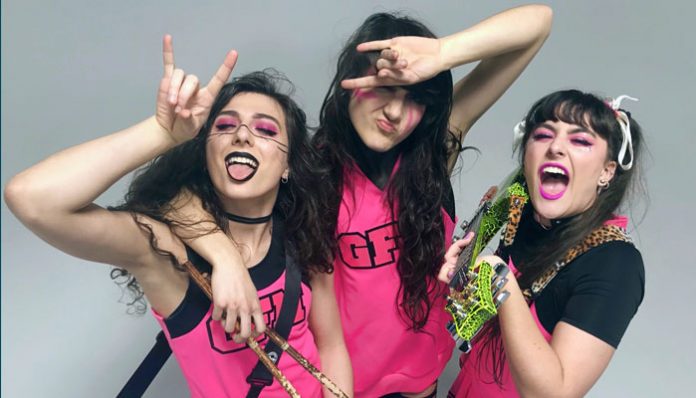 Say hey to GFM, three hard-rocking young women from Jacksonville, Florida, who are going to raise some cane and (in the process) your spirits. Today AltPress is premiering the video for their new single, “Taking Over.” Talk about truth in advertising. Maggie, CJ and Lulu English bring some slamming piston-engine riffs against cool pop melodies to shake things up so your eyes roll in a good way.

“‘Taking Over’ is a song about standing up for yourself and for others,” the English sisters write in an email to AltPress. “We’re not taking no for an answer, and nothing is going to stand in our way. The time to join Team GFM is now before it’s too late.”

GFM (short for Gold, Frankincense & Myrrh) have been plying their rocking trade for five years now. They call it “beautycore.” We call it a mashup of modern rock where genres mean nothing and energy and emotion are everything. That vibe is in full bloom all over their 2016 debut album, Identity Crisis.

“Prepare to hear GFM at their heaviest,” producer Joey Sturgis says. “Working on this song was all about capturing the girls at their heaviest moment [and] shattering your ears while allowing their melodic ability to continue to shine through the rubble.” Sturgis’ resume (Asking Alexandria, the Devil Wears Prada, Of Mice & Men) is practically the rulebook of American metalcore. He sees the same kind of fire in GFM. And so do the fans who discovered them: GFM have shared festival stages with bands as diverse as A Day To Remember, Motionless In White, Halestorm and All That Remains.

GFM’s positive mental attitude has allowed them to flourish in these uncertain times. The trio are doing a “virtual tour” of various social media platforms. The first set of “tour” dates were announced on the band’s Instagram feed. (Check it out: The first date is today, April 10.) They will be adding an acoustic version of “Taking Over,” along with a Q&A session.

Check out GFM now so you can say you were on the ground floor when it started. Remember all those times you were “too busy” to read, discover music or get excited about something? You’ve got no excuse now, but it’s cool. GFM are bringing all the noise to the yard.